Of course I HAD to Visit Snyder Lake in Glacier National Park!

This past weekend my brother-in-law flew up to visit friends in Montana. We flew into Kalispell and met our friend Sage for a few days before heading south to see other friends south of Missoula. During each of our 3 days in Kalispell, we went hiking in Glacier National Park.

Once I saw that there was a Snyder Lake on the Glacier National Park map, I knew we had to hike to it. Especially given that it was the perfect length hike for the amount of time we had during our last evening in the park.

The trail to Snyder Lake shares a trailhead with a couple other popular trails. You park at the Lake McDonald Lodge and then head across Going to the Sun Road to start the hike.

The trail is initially a pretty good climb. It was warm, and we took a couple breaks on the way up. 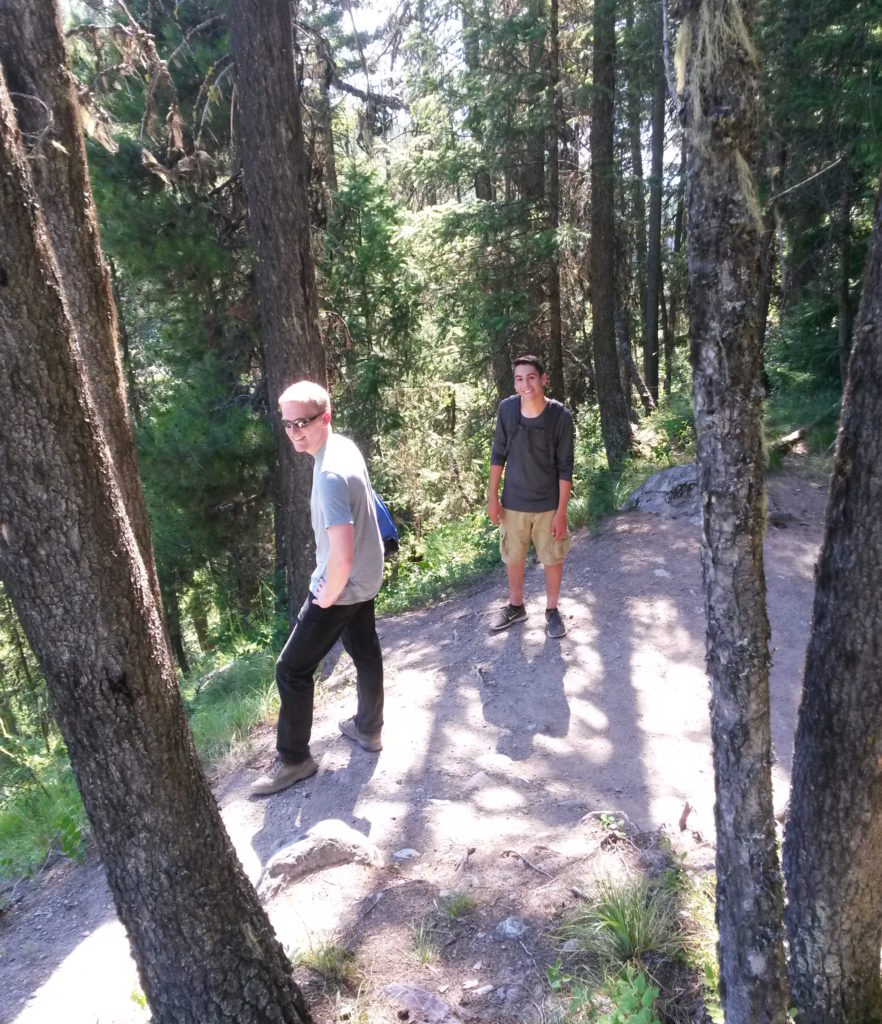 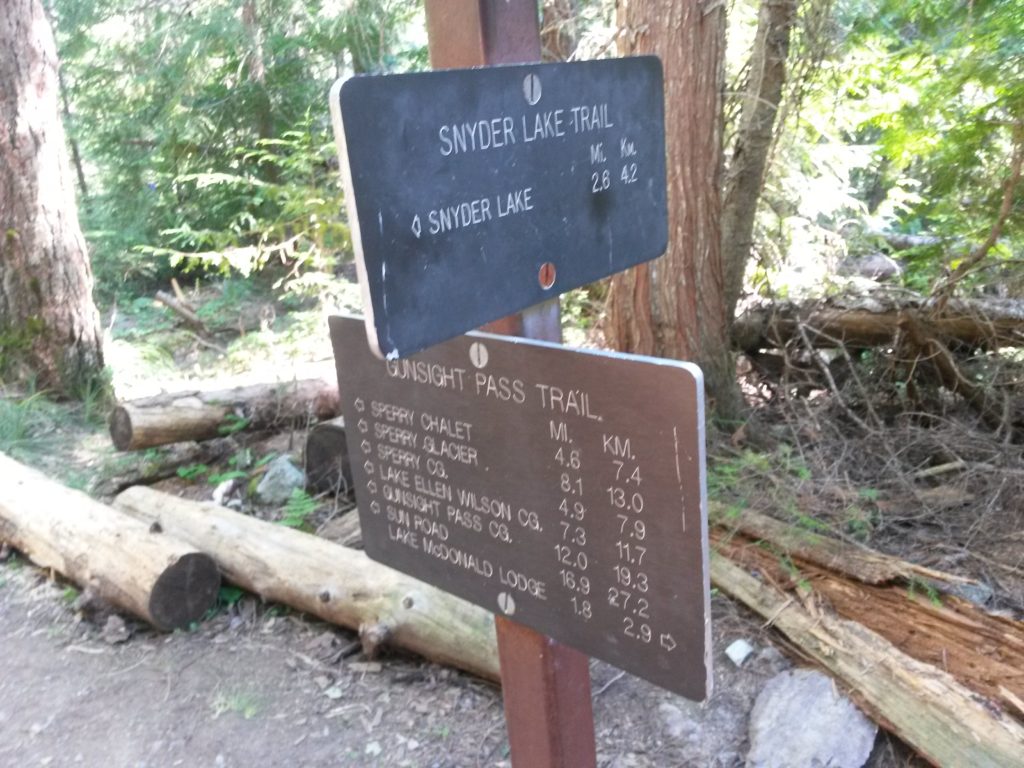 The other options are continuing on further to the Fish Lake spur, or all the way to Sperry Glacier if you have the time. If we had all day to hike, heading to the Glacier probably would have been the best choice.

The Snyder Lake trail was a whole lot less traveled than the other trails we had been on the previous two days. We hiked to Avalanche Lake on our first evening, and then the Highline Trail on Saturday (SEE: Hiking the Highline Trail Glacier National Park). Both were spectacular, but both also had many other hikers traveling them. 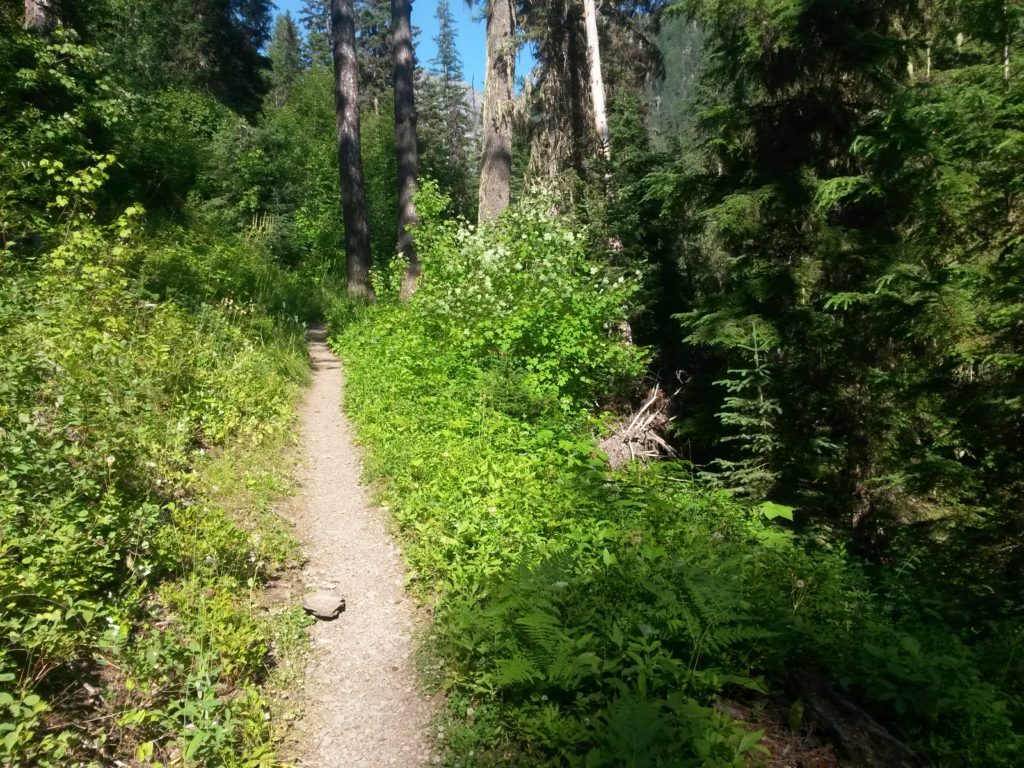 Over our time on the Snyder Lake trail, we only saw two other groups of hikers. The trail was well-trodden, but the bushes around it often started to grow into the path. I started to get a bit concerned about ticks.

The trail was a gentle incline, which was perfect after our brutal 3,000 foot descent the day before. I was happy that heading back would be a comfortable gentle downhill. We also crossed several small creeks.

The further we got up the canyon, the prettier the scenery became. 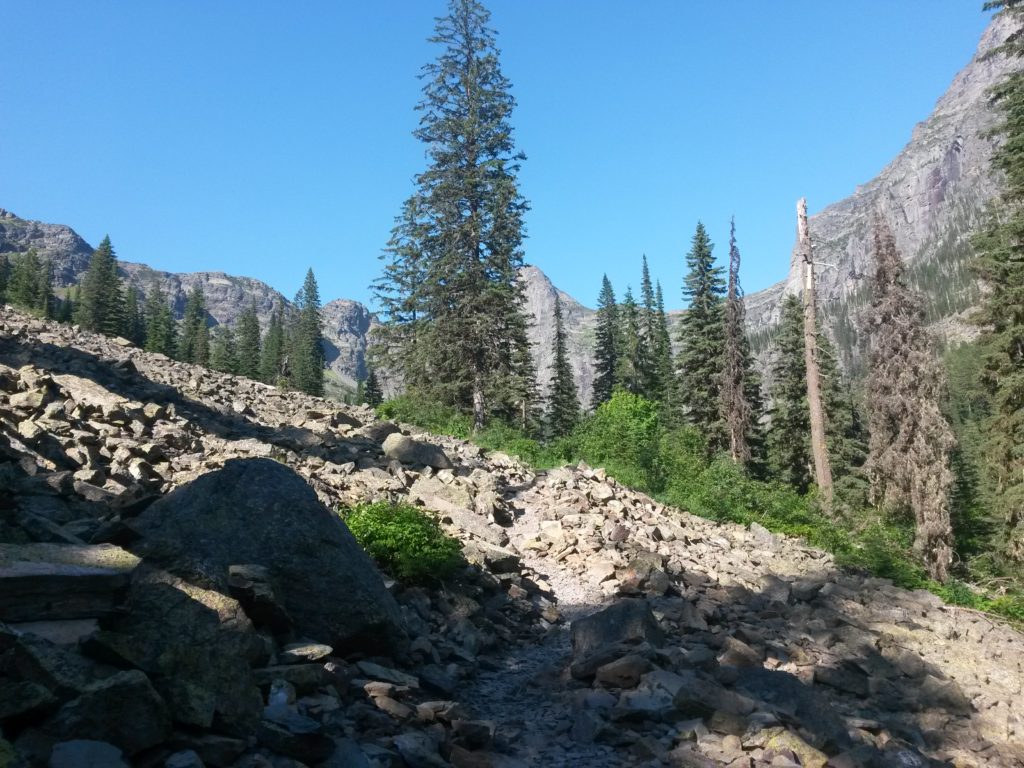 Notwithstanding all the complaining by my brother-in-law, Snyder Lake was quite pretty. 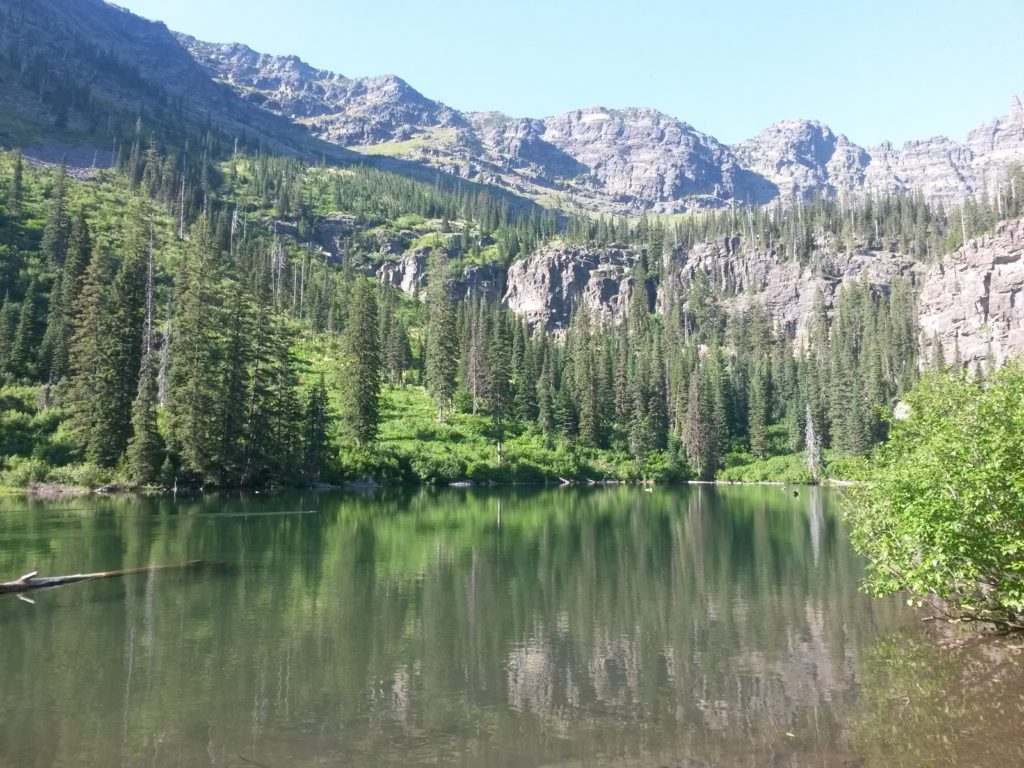 I could hear a waterfall in the distance, but even after looking across the Lake for a while, I couldn’t spot it.

The only issue with the lake was the bugs. There was a noticeable increase in mosquitoes, flies, and gnats within the last 1/4 mile of the hike, and things were even worse once we reached the lake. The lake offers primitive camping sites for backpackers, and I was quite glad we weren’t staying.

We could have continued on to upper Snyder Lake, but it was getting late and we were getting hungry, so we decided to turn around immediately. 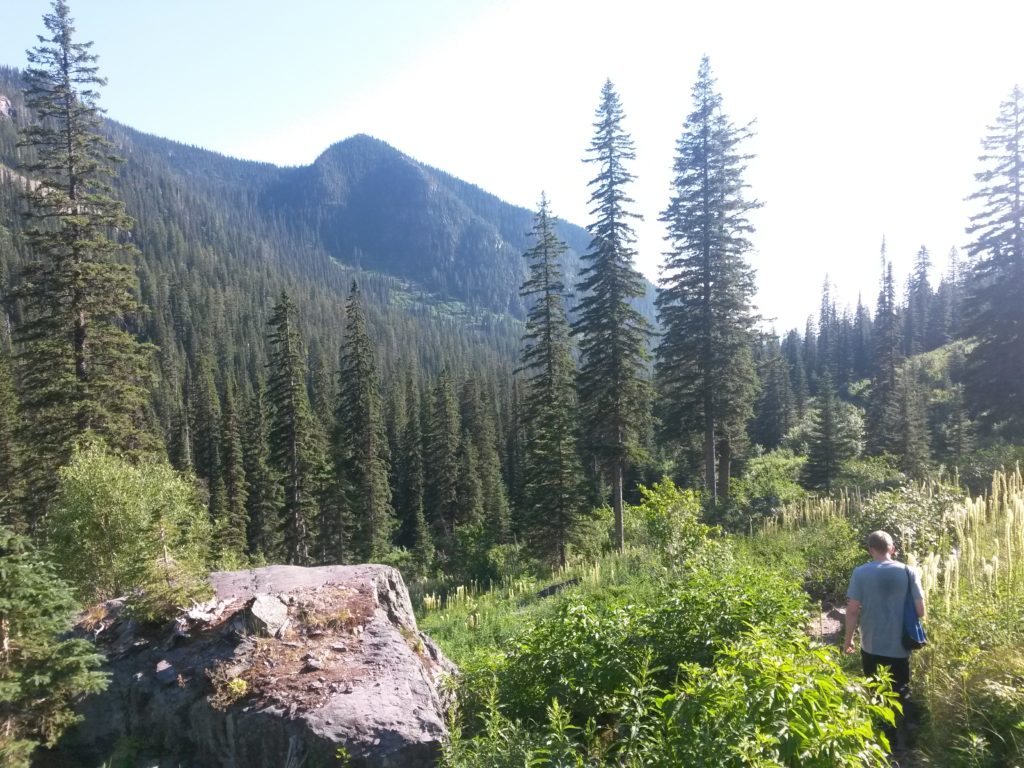 We had only been hiking back about 5 minutes when we ran into a deer right in the middle of the trail. She made absolutely no move to get out of the way, even with the 3 of us only 25 feet away. Ryan finally blasted a bit of Lindsay Stirling as loud as he could on his phone and the deer moseyed off.

We arrived back at the Lake MacDonald Lodge parking lot after 8:00. Luckily, Jammer Joe’s was still open, so we hit the place for dinner. Heading out of the park was bittersweet, as I knew there is *so* much more to see. We’ll have to come back someday.

As I sit here on the 20th floor of the Hyatt Regency Vancouver, watching the snow gently swirling lazily down to the street below, I find myself reflecting on our 2016 travels. What a wonderful year of travel my wife and I have enjoyed. It has truly been amazing. So many experiences in so many place. And for so little out of pocket.

We started things off with a wonderful winter trip to Quebec City, Montreal, and New York City. Quebec City is about as European as you can get without traveling to Europe, and we had a lovely four days in a tiny apartment we rented. It was our first experience using AirBnb, and also our first experience of negative Fahrenheit temperatures. Additionally, I realized that my wife absolutely loves ice skating, but is terrified of skiing.

Spring included a couple trips to visit family and friends. Summer then brought our biggest adventure. We were able to spend 30 days in Europe, enjoying the balmy French Riviera, the art and history of Italy, and the exquisitely beautiful Emerald Isle. I already long to go back to Ireland.

During autumn we surprised my in-laws in Portland for a few days in the rainy Pacific Northwest. And now we are on our final adventure of the year, one that will bridge 2016 and 2017, here in Vancouver. We enjoyed Granville Public Market today, and plan to have an easygoing New Years Eve. Tomorrow will be spent in Stanley Park, and Monday is yet unplanned.

All Thanks to Travel Hacking

Through the miles and points we accrued in 2015 and 2016, we were able to enjoy these experiences at a fraction of what they normally would have cost. The flights for nearly all of our trips have been on miles we’ve earned, and much of our hotel has been on points. For our summer trip to Europe, we paid for a total of 4 nights of hotel, plus minimal amounts in taxes for many of the other nights. Flights for the two of us cost a mere $350 total.

I absolutely love helping others interested in the world of “travel hacking”. This is one of the biggest reasons I was so thrilled to be on-boarded with Points with a Crew as a contributor this month. It has allowed me to write for a larger, more established audience (sadly, I’ve written less here).

For my local friends and family, I hope to hold a “Travel Hacking 101” session in late January 2017. I am still thinking about the venue and format, but I would like to set up a time for both a presentation and some Q&A afterwards. If you’re reading this and live in Humboldt, send me a message via email or Facebook if you’re interested and want a spot before I release the invite to the world. 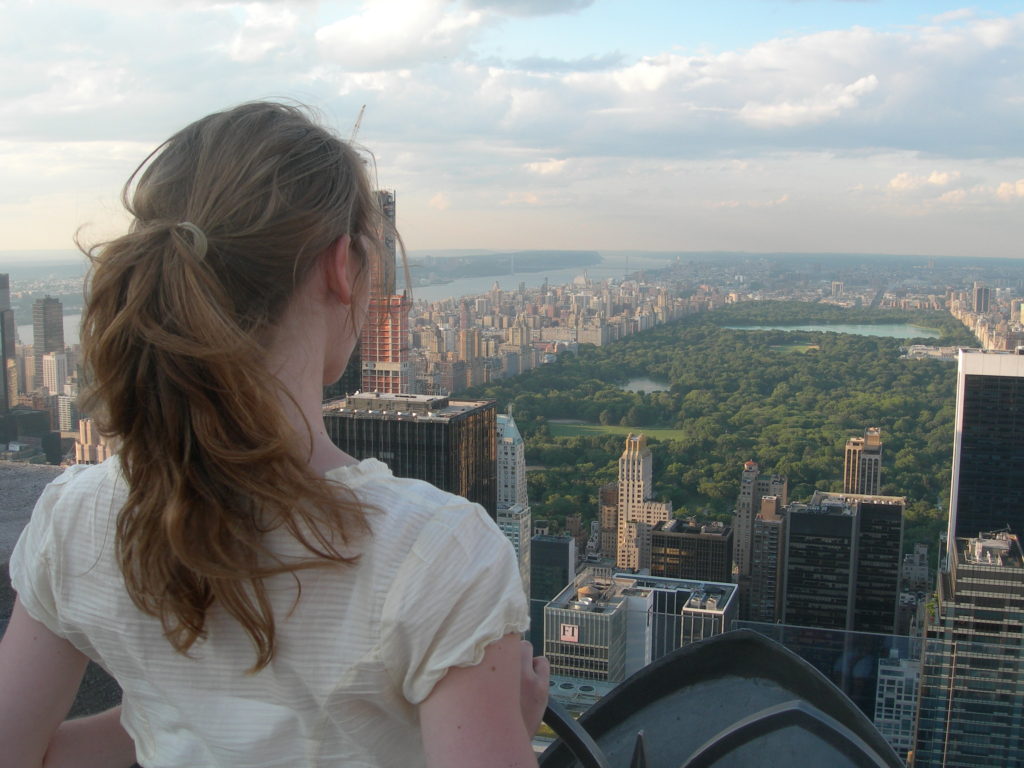 Things are mostly unknown looking into 2017. I wrote about 3 trips I look forward to over at Points with a Crew, but these only carry us through January (as we are currently on one of the 3 I wrote about!). We know that 2017 will likely bring a large amount of change to our lives.

Actually….our lives will probably be turned upside down. It is almost certain that 2017 will be the year we finally adopt our children. My wife and I recently had to do a home study update (since it has been so long since we completed the initial one), and from the communication we have had with our agency, they are very hopeful that we will have a referral soon. We are so excited.

This does mean we have to keep the travel plans to a minimum, since we will need to drop everything and be ready to travel about 6 weeks after we say yes to our kids. But I am completely fine with that. Starting our family will be our new adventure. 🙂