5 Days in Beijing: Day 4 – Tiananmen and the Forbidden City

The kids finally slept in a bit more than the previous two days. After a day chock full of sightseeing followed by one where we had our excursion to the Great Wall, they were extra tired. I’d actually set the morning aside for school, which is exactly what we did after breakfast. We may be across the world, but they didn’t escape the books this trip!

We called it a day at about 11:00 a.m., though, which was a grand total of about 2 solid hours. Beijing would provide the history lesson for the day.

Most people older than I probably remember the Tiananmen Square incident in 1989. I was born that year, so I don’t exactly have firsthand knowledge of what transpired, just what I’ve read and been told. While the square has a more lengthy history, including being the place where Mao Zedong proclaimed the founding of the People’s Republic of China, the first thing that always comes to mind when I hear “Tiananmen” is “tank man” and the protests that were forcibly subdued by the Chinese military, leaving a large number of people dead.

With that solemn history in mind (I didn’t try and explain anything to the kids), we made the walk to Tiananmen Square. The fall colors in Beijing were lovely along the way. 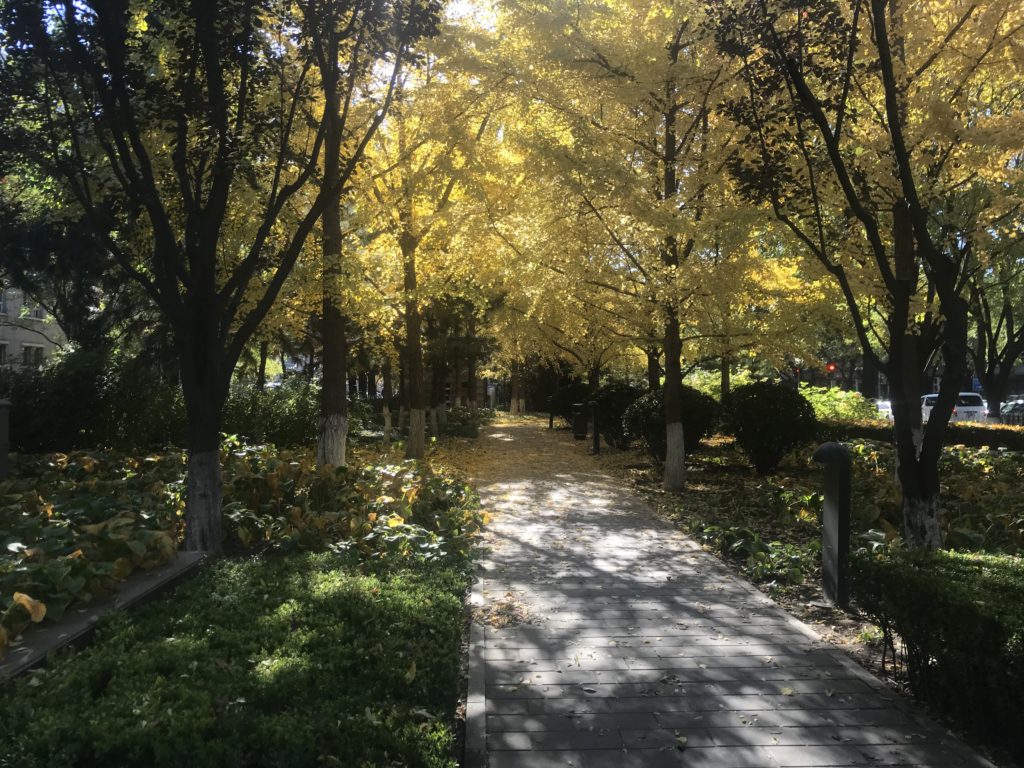 The walk was a bit further than I figured, but still not bad from the Renaissance on Wangfujing Street. Crossing under the street, we popped up in Tiananmen Square.

The square is immense. It can supposedly hold half a million people. To the north is the “Gate of Heavenly Peace”, from which Tiananmen gets its name.

In the middle (roughly) is the Monument to the People’s Heroes. To the south is a Mausoleum of Mao Zedong. 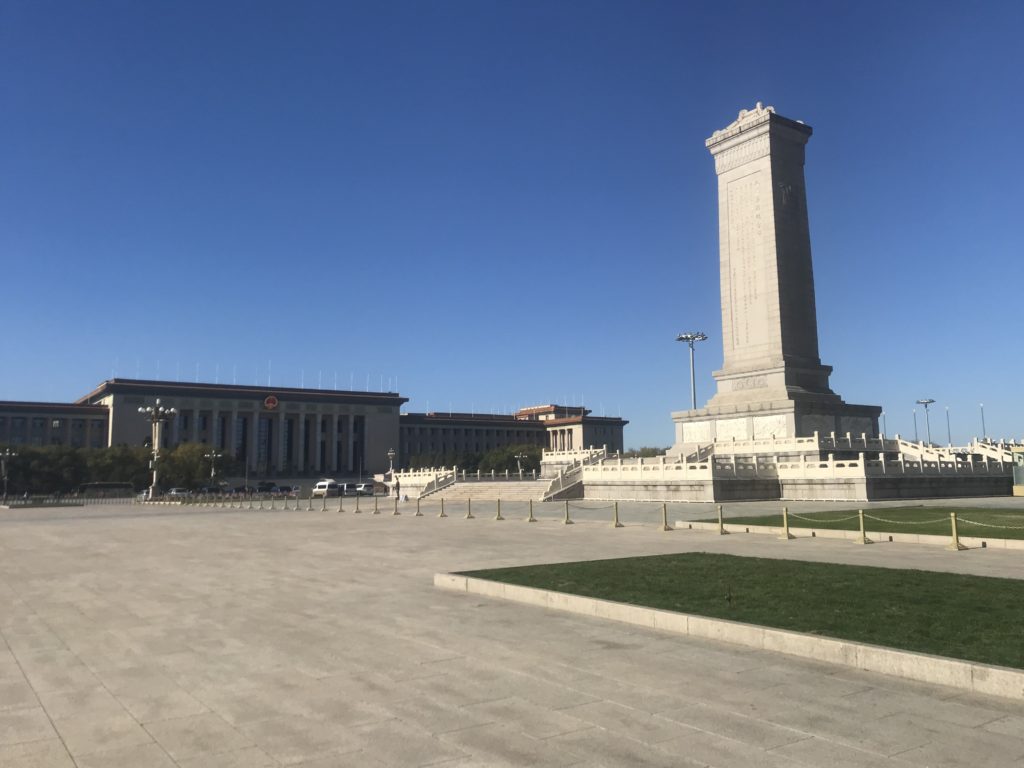 There were a good number of people out in the square, but given the size, it didn’t feel crowded at all. The National Museum of China flanks the square to the east. It was also on the list of sights to see, but given how many other things there were to do in Beijing, I decided to skip it. It’ll have to wait for another visit, probably once the kids can appreciate museums more.

Satisfied with our walk through the square, the kids and I once again crossed under the street, this time arriving in front of the “Gate of Heavenly Peace.” The placement of a large picture of Chairman Mao on the gate is paradoxical to me. He is the leader responsible for the establishment of the People’s Republic of China, ushering in China as we know it from this very spot on October 1, 1949. Yet he is also the man responsible for the “Great Leap Forward”, a period where tens of millions of Chinese people died due to poor governance that severely compounded natural disasters around 1960. 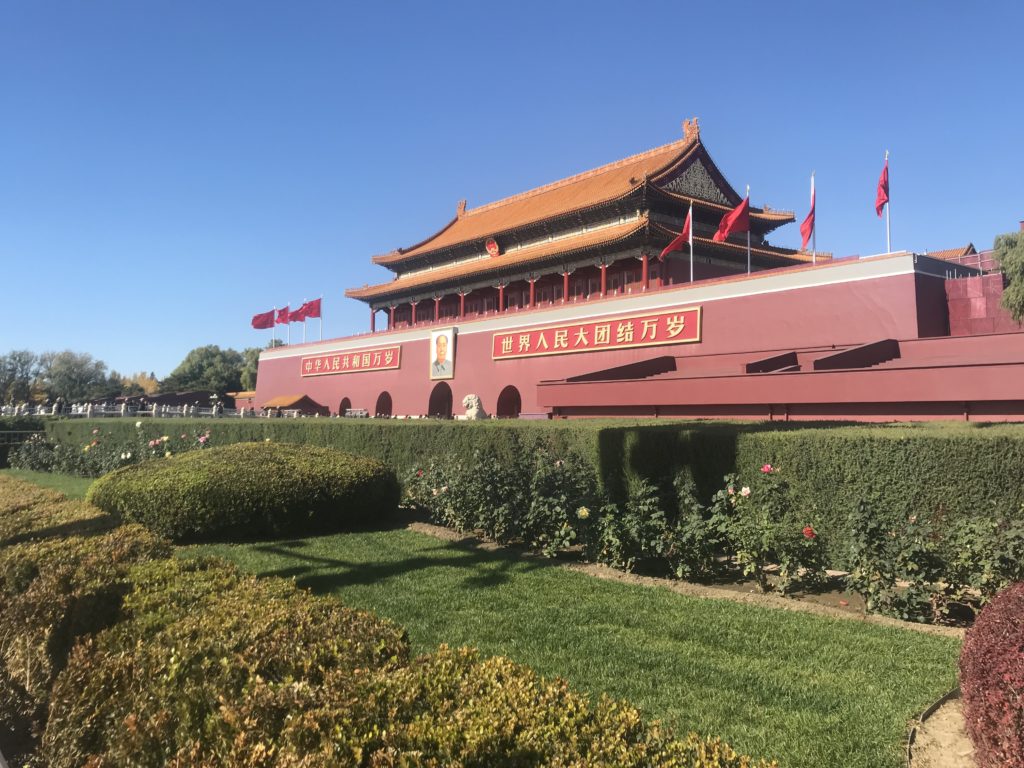 Seeing his photo here was enough. I didn’t have the desire to take the kids to see the embalmed leader in his Mausoleum on the other side of the square.

Entering into the Forbidden City, I decided we better find a place to eat. There isn’t anything very easily accessible at Tiananmen Square, unless you want some snack foods sold by the vendors. That just won’t cut it for me. Luckily, we found a spot.

Lunch was a solid introduction for the kids to how the Chinese don’t respect lines. The lunch counter we found in the first courtyard contained a throng of people slowly pushing their way along toward the counter. You basically just stand in the mob and shuffle your way to the front, eventually being the one closest to the cashier so that you can order. 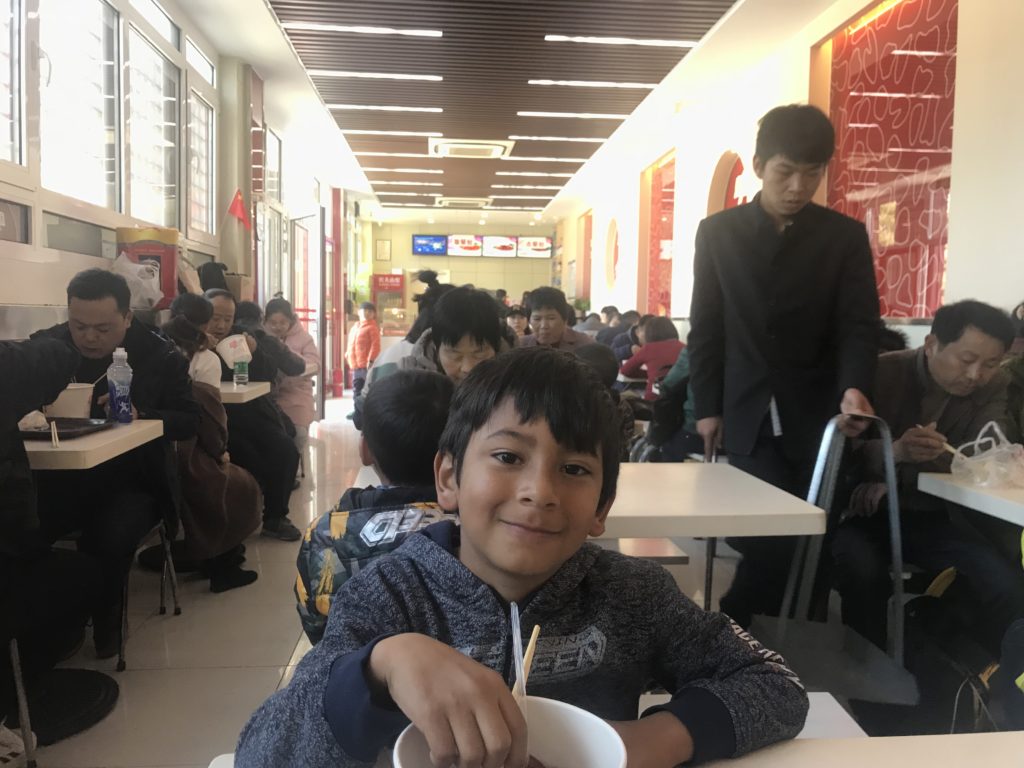 I wouldn’t eat here if you can avoid it. The food had to be chock full of MSG. The flavors of the meatballs and beef we ordered were too intense and satisfying.

Entry tickets to the Forbidden City are fairly inexpensive like nearly everywhere we’ve visited in Beijing. I think I paid 80 yuan for the three of us to enter, 40 yuan for myself and half that for each of the kids. For reference, this is less than $12 for one of the foremost historical sites in Beijing. 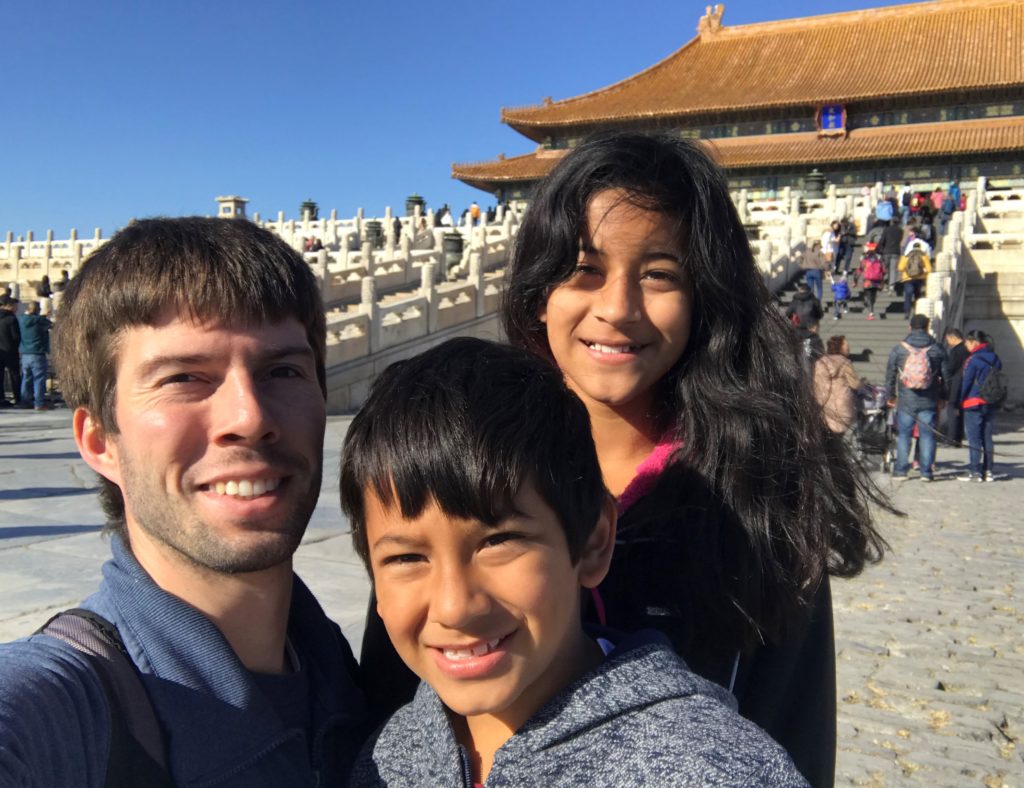 I did also opt for a audio guide. I thought about getting more than one, but we either took turns listening to some of the explanations or I just relayed the main points to the kids. If you want to maximize your visit to the Forbidden Palace yet still go at your own pace, I would suggest one of these. 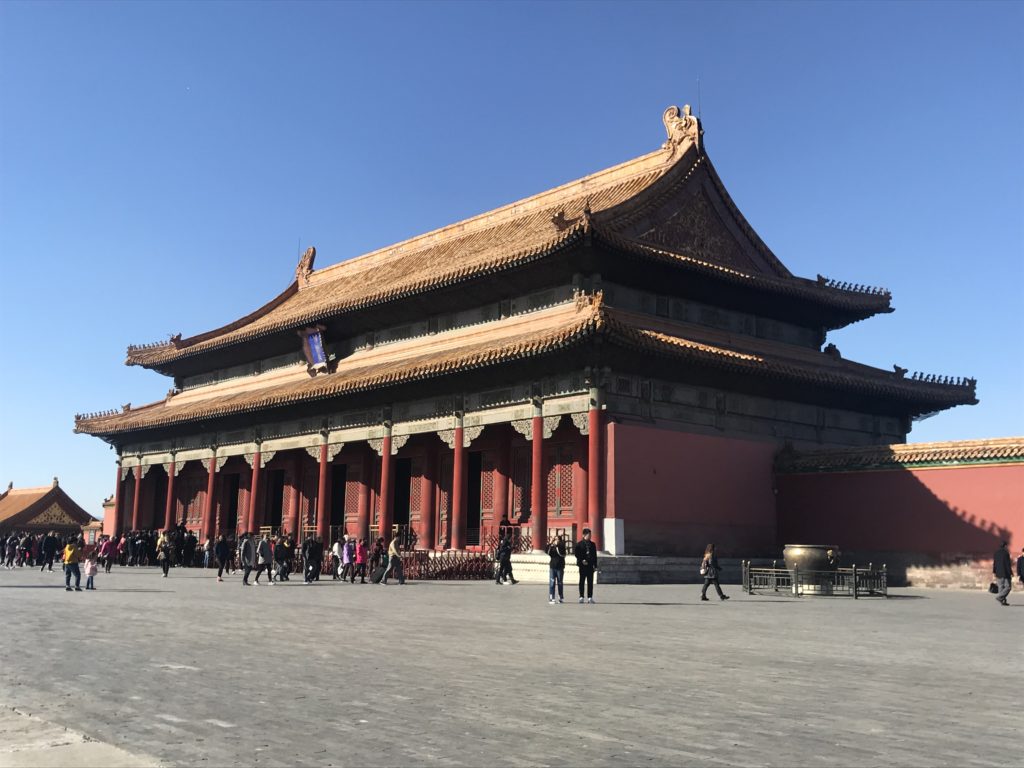 One of the features of the Forbidden Palace is the presence of multiple sundials, in a form I’d never seen before. From what I understood, the sundial was invented independently here in China, although the sundials of other cultures predate it. In this case, the sundial disk is oriented such that it is in line with the arc of the sun at each equinox. The upper disk is then read in the summer, when the sun is higher in the sky, while the lower disk is read in winter. 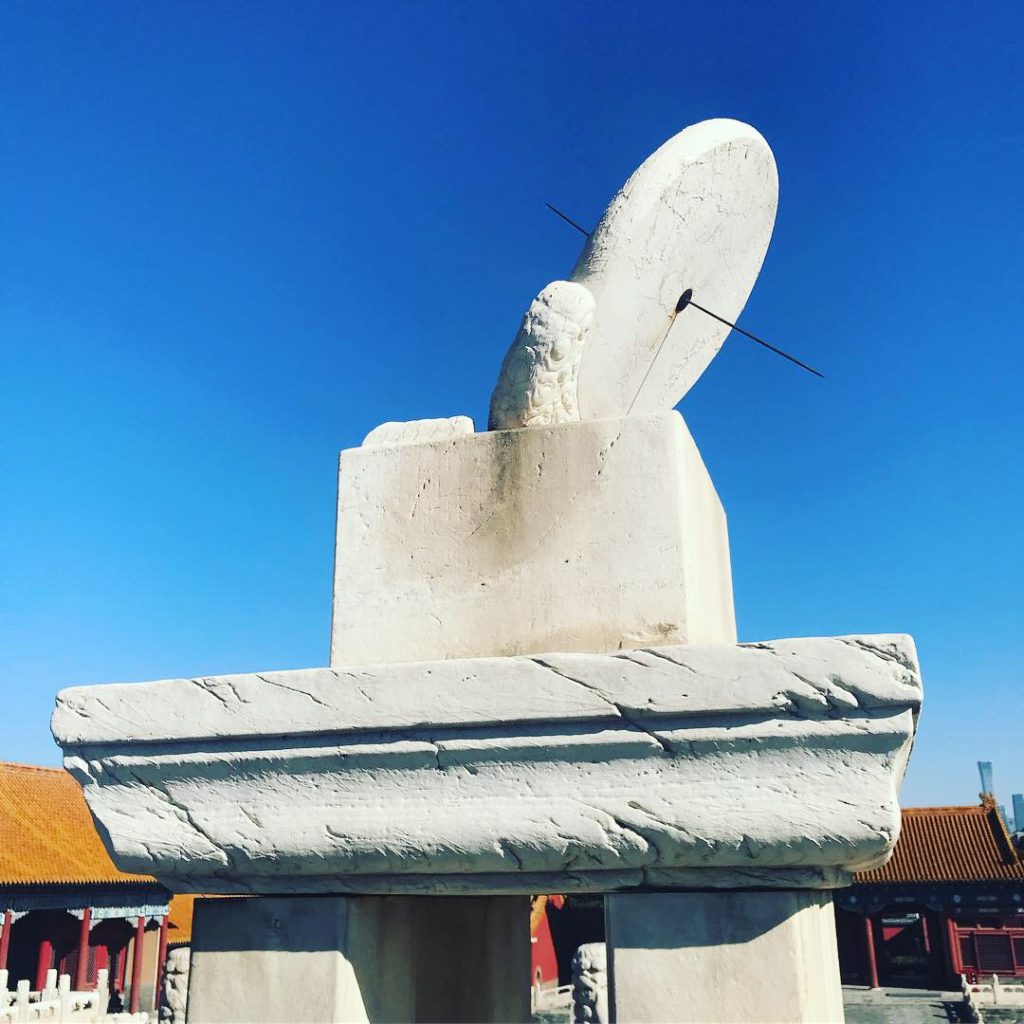 Another interesting feature of the bulk of the Imperial Palace buildings are the processions of tiny beasts at the corner of each roof. The Hall of Supreme Harmony boasts the most of these figures, which one gave it the highest status of all buildings in the Chinese empire. 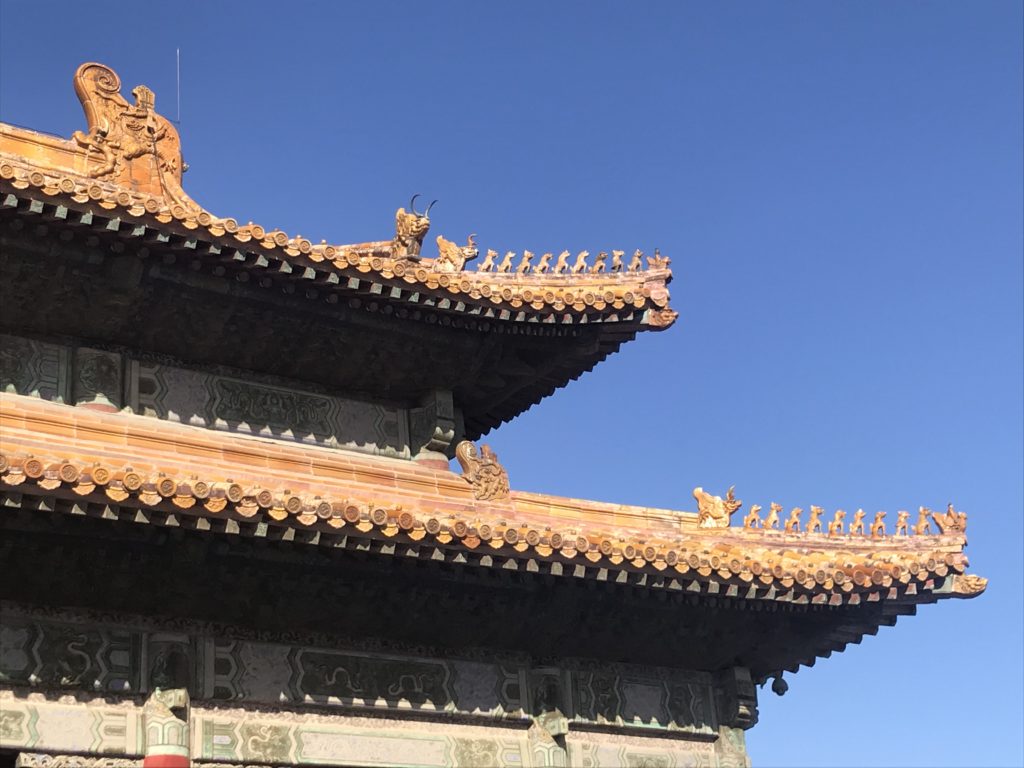 The Forbidden Palace really is magnificent. It is (unsurprisingly) among the listed UNESCO sites for its cultural and historic significance. 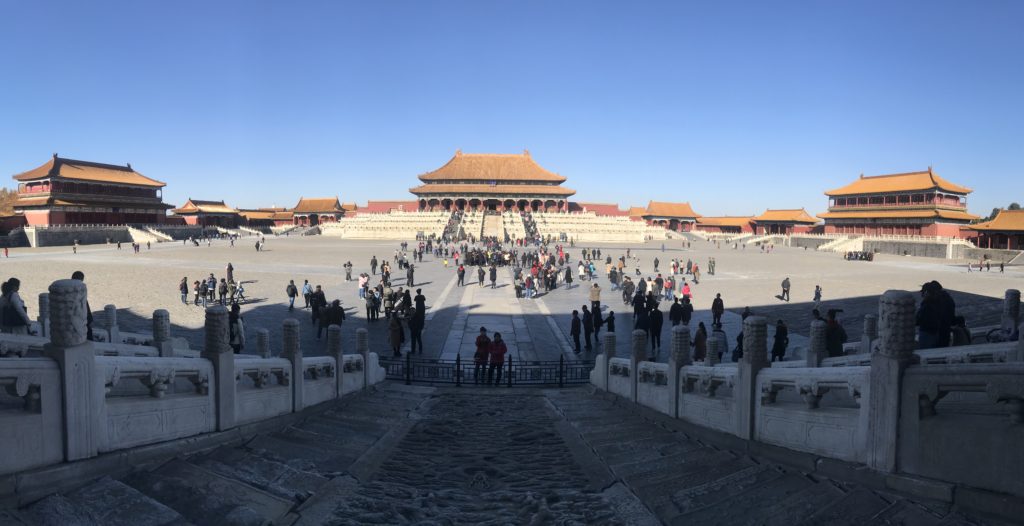 The impressiveness of all this history sure didn’t keep the kids from being their goofy selves. 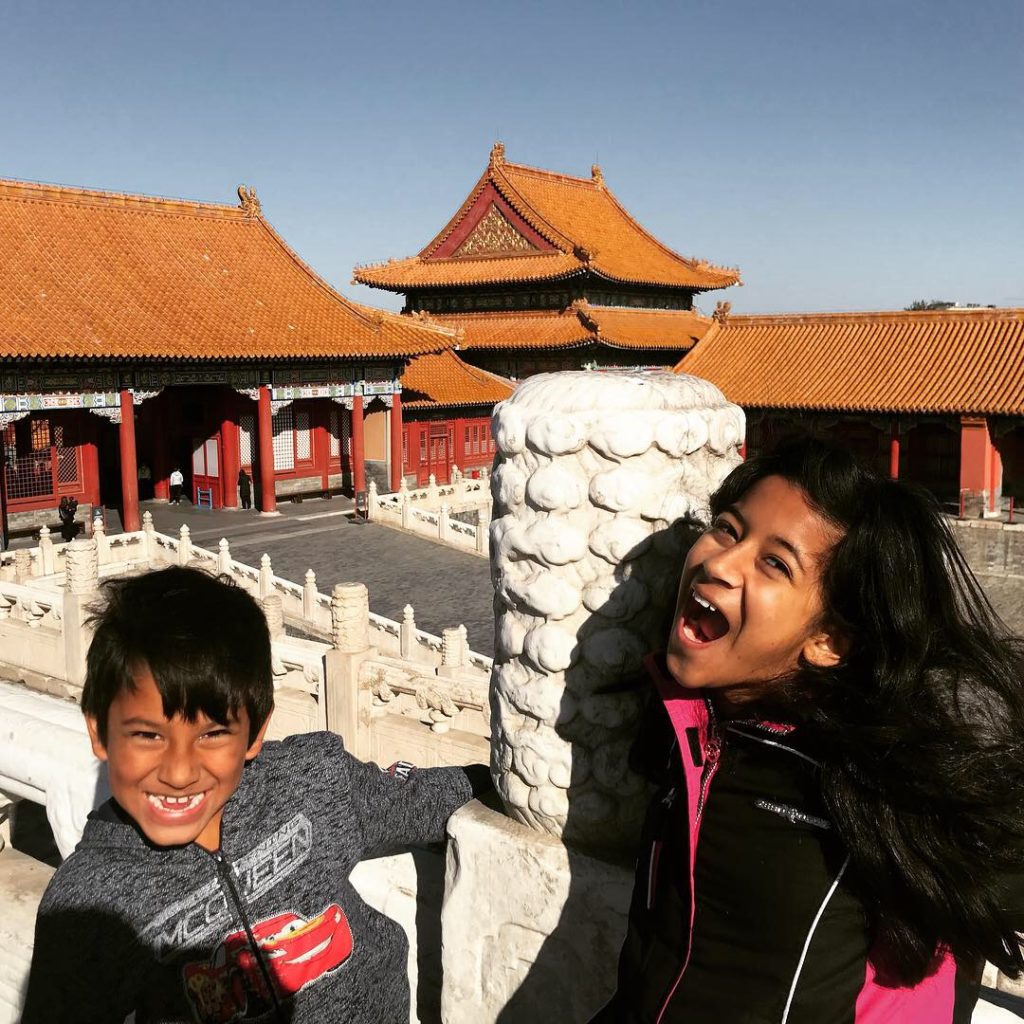 Near the very end of the palace (everyone passes through south to north), there is a very interesting feature. I didn’t really know what to make of it until the audio guide finally decided to explain what we were looking at. This odd rock face is actually artificially constructed from stones taken from a lake is a part of China quite distant from the capital. The pavilion at the top is said to have the best view of the entire Forbidden City. 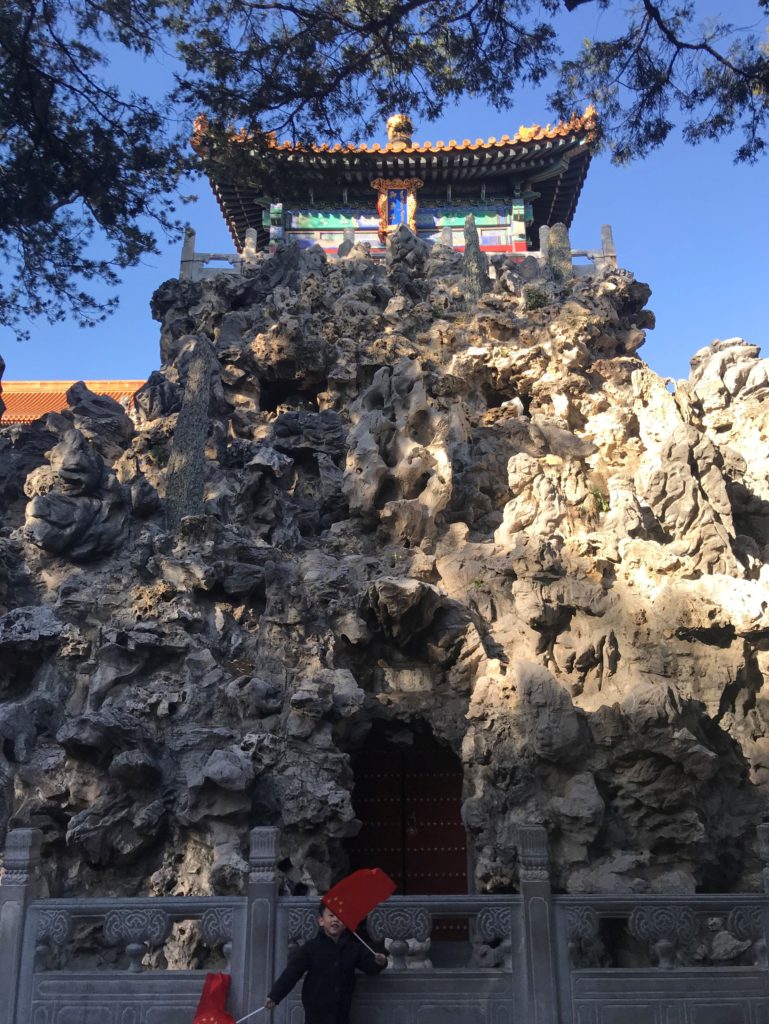 Our visit to the Forbidden Palace lasted about 2 hours. We didn’t see all the sights,  but we were able to walk through or past the bulk of the halls and most interesting areas. If you’re really into the history of the palace, I’d suggest a visit of more like 4 hours.

Climbing the hill in Jingshan Park

We’d seen Jingshan Park during our second day in Beijing (Day 2), from the Drum tower. The Forbidden City, Jingshan Park and the Drum and Bell Towers all lie on the same central north-south axis of the city. Given the length of history of Beijing, the city has had this design for many centuries. You could stand right on it if you wished. 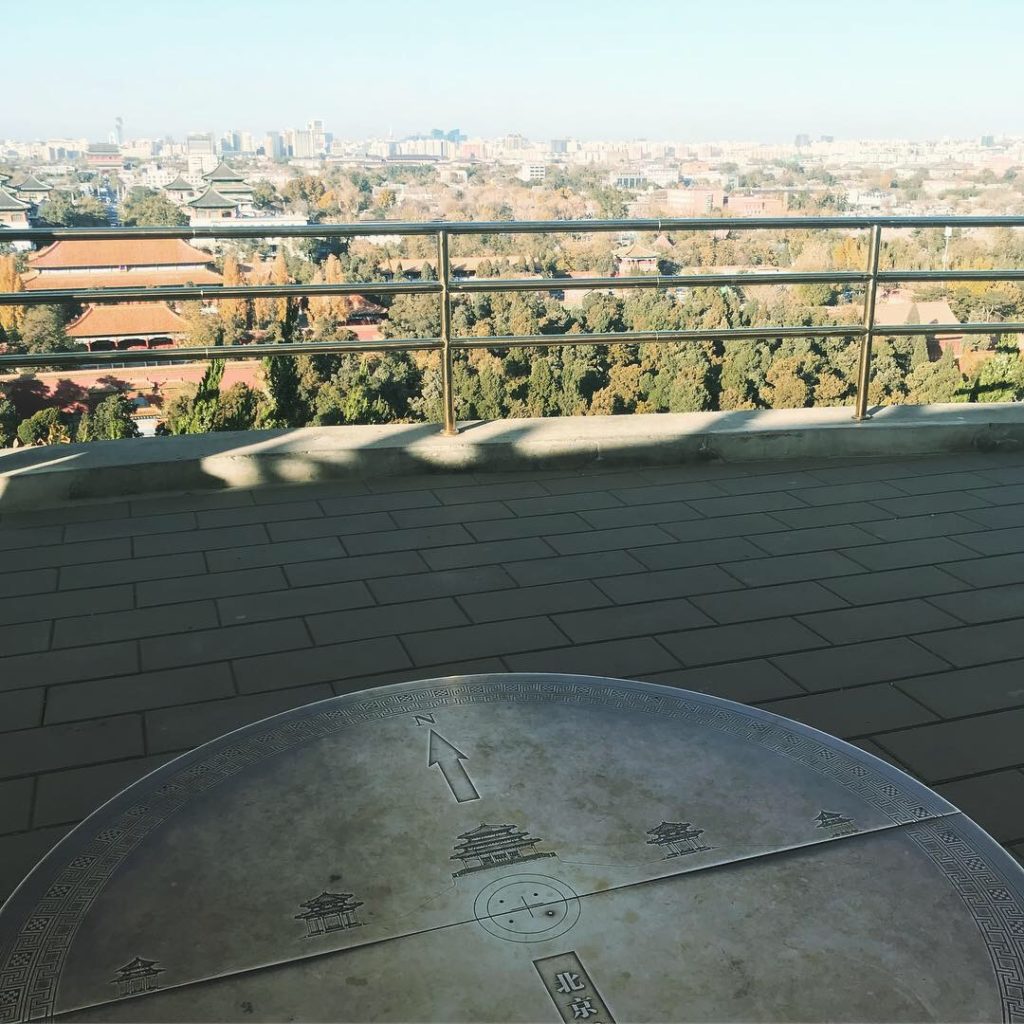 The walk up the hill was fun. At least…*I* thought it was fun. The elevation gain is seriously only 200 feet or so. Yet the kids acted like they were dying. I barely got my son to smile for this. 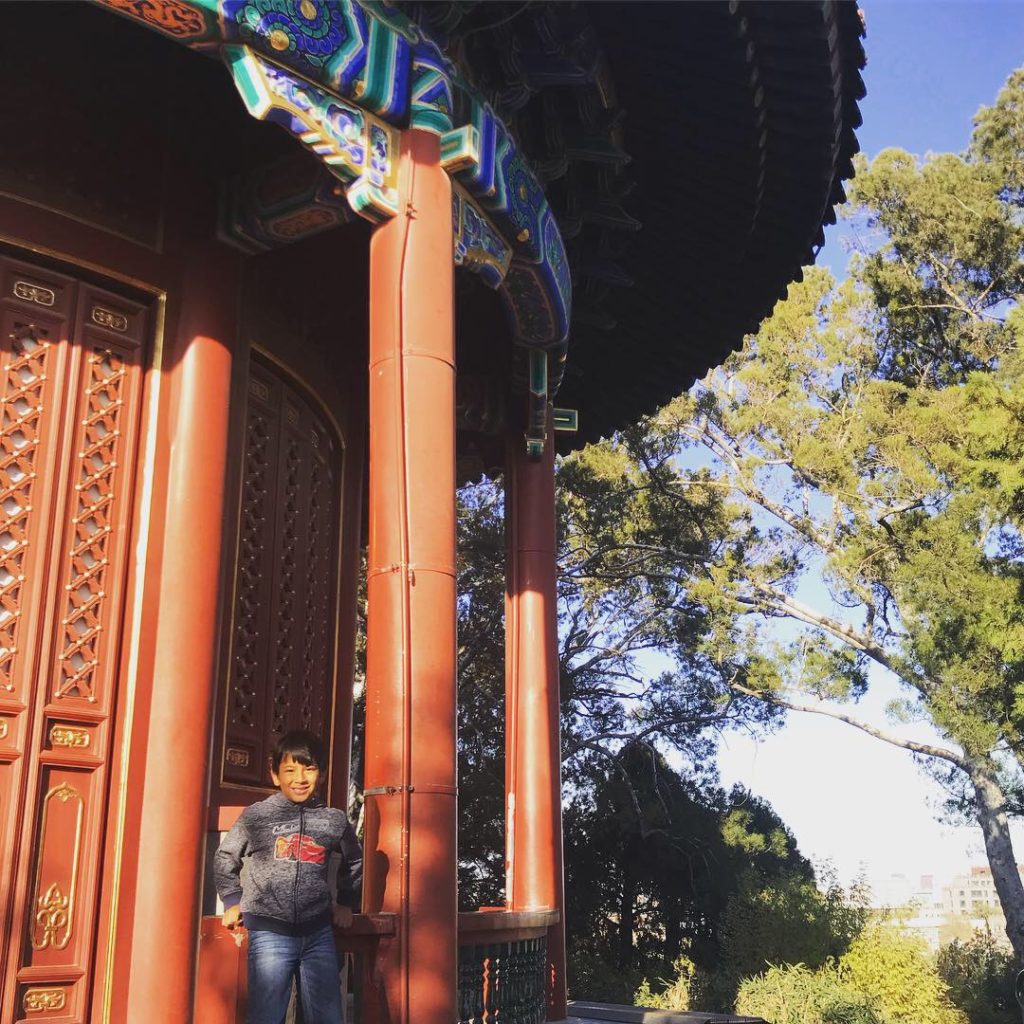 The air quality on Day 4 was also the best it had been the whole trip. I’d read so many stories about how awful many cities in China can be, but I did not that November is a better time for Beijing in general. Our view of Chaoyang from Jingshan Park was excellent, and the air was so much clearer than just the day before when we were headed to the wall. 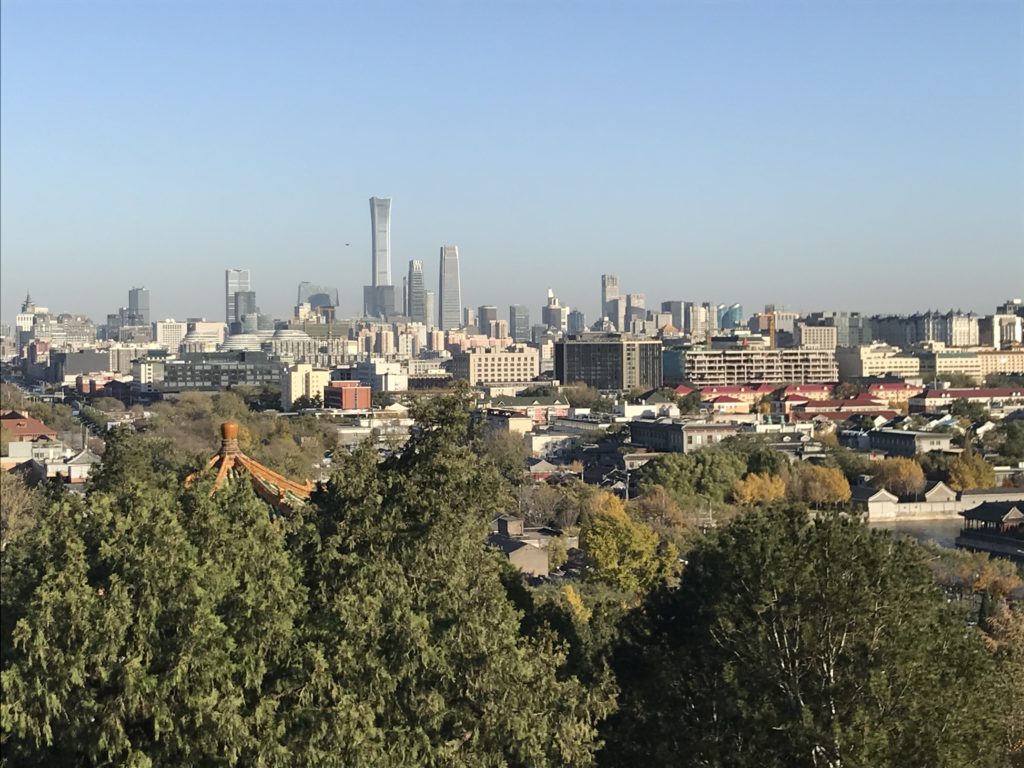 The air was so clear we could see the hills miles away to the north. The sliver of lake on the left is near Shichahai, an area near the hutongs we wandered on Day 2.

After we’d made our way back down from the hill and toward the gate, we decided to watch the group of ladies dancing with streamers. We’d seen a bit of this at the Temple of Heaven on Day 2.  It is a lovely and enjoyable art to watch. 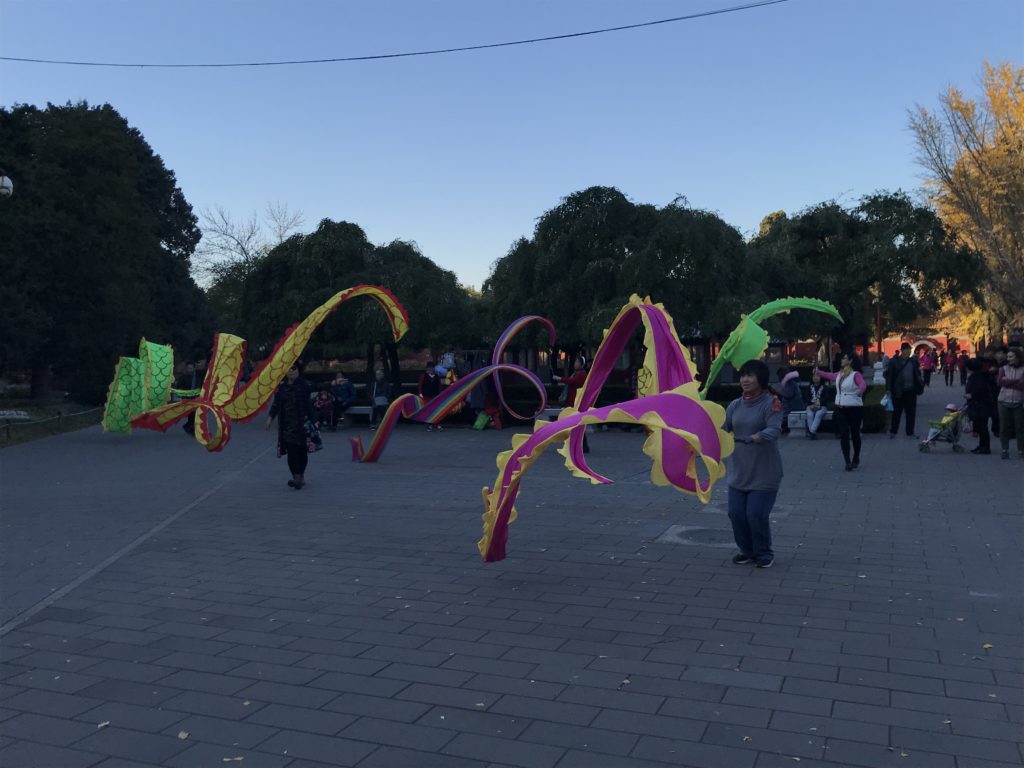 While surely not as picturesque as spring or summer, the park in the fall didn’t turn out to be that bad. So many bright yellow trees everywhere we went. 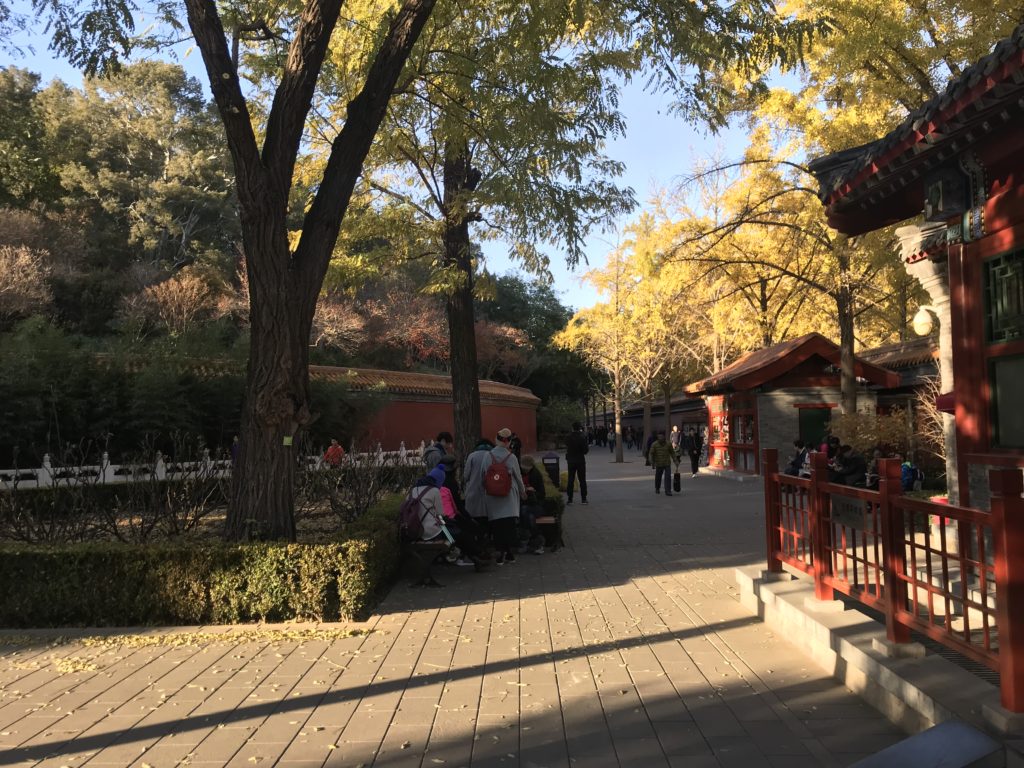 The kids had been asking for panda hats a couple times. While prices at the Great Wall shot that request down pretty quick, we found them a whole lot better here in Jingshan Park. Barely $5 for two hats? I’ll take ’em. 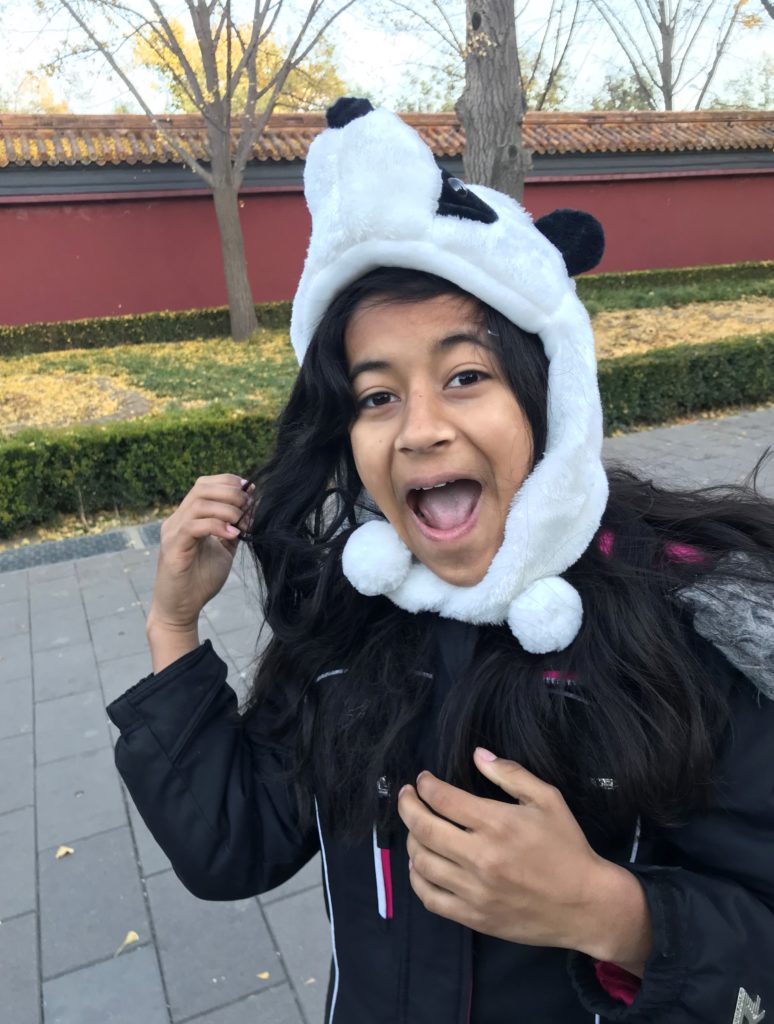 Evening in at the Renaissance

We walked back to our hotel from the park, wandering through a coupe hutongs on the way. The kids and I were solicited multiple times by rickshaw drivers who wanted to take us on a tour. One even had the clever idea of turning my kids against me by saying they must be tired from walking and are too young to be going so far. Luckily, I don’t have such sympathy. They will survive another half mile.

The kids wanted to play foosball when we got back, which was fine by me. It was the perfect activity for killing a half hour before the club lounge opened for dinner. As is typical, they couldn’t make it 15 minutes before they got in an argument and my daughter refused to play anymore. So I got to show my son who is the real foosball boss.

Dinner was quite good. I wish I’d realized our first night that “happy hour” of two hours between 5:30 and 7:30 was actually dinner and not just drinks. It would have saved us about $25 spent eating out and honestly been way easier.

The day came to a close with showers for the kids and then reading some Calvin and Hobbes together. Our last day in Beijing was yet unplanned, so I had a bit of work to do after the kids turned in. Would we make an easygoing day of it seeing some last sights in Beijing? Or would we cap things off with a day trip to Tianjin?

A Full Travel Year: Reflecting on 2018