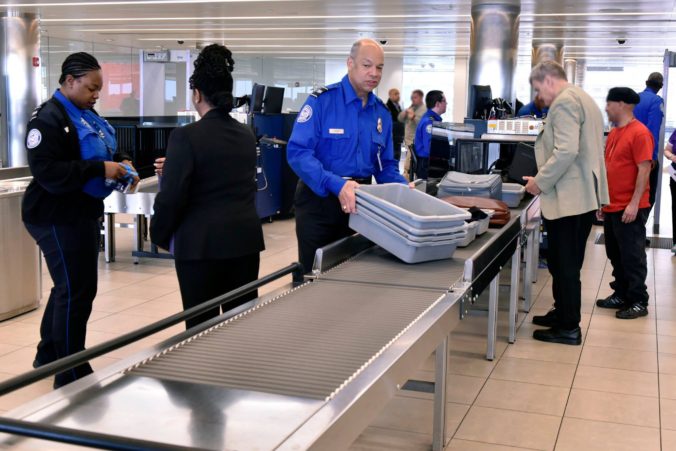 Standing in Your Shoes. A message from Secretary Johnson about the men and women of TSA → “On Thursday, I worked alongside the men and women of the Transportation Security Administration at the Baltimore-Washington International Airport. I interacted with passengers and addressed their questions, and even helped a family get to their gate on time. These are just a sampling of the essential tasks that the men and women of TSA perform each and every day as they stand on the front lines of our nation’s aviation security. I have stood in their shoes – this job is not easy. But it is vital. TSA secures the skies, and does so professionally, courteously, and with a sincere dedication to duty. Thank you, TSA, for what you do to protect the homeland.”

Getting the full pat down from the TSA at Arcata Airport

Thus far in my flying career, I’ve had very few notable incidents with the TSA. Sometimes the giant millimeter wave machine will erroneously say I have something in my back pocket or on my chest, and the Mr. TSA man will have to make sure I’m not carrying a hidden box cutter. Lately, security has actually been fairly painless when I’ve traveled.

But that all changed yesterday morning. I started things off with a full pat down from the TSA.

Of course my bag appears suspicious

I was headed off for a 5-night stint in Australia, eager to experience my first flights in a true international premium cabin. I had even managed to book seat 1A in the nose of a Boeing 747-400 (so geeky, I know). I was flying SFO to Seoul Incheon (ICN), and then ICN to Sydney, Australia (SYD). To start it all off, though, I had to make a quick connecting hop from our local Arcata-Eureka airport.

I arrived at Arcata-Eureka airport with about 50 minutes until our scheduled departure, and about 20 minutes until boarding. Security at the airport is a single line for the single departure gate, and is usually very quick and easy.

But not yesterday. I put all my stuff in the bins as usual, careful to leave my laptop in a bin by itself. The first TSA agent asked if I had any liquids, and I said yes, and that they were really tiny. She said that was fine and ushered me through.

I had no problems passing through the metal detector, but I knew something was up with my bag. The lady manning the x-ray machine stared at it for a long time. When it did come out, another agent promptly took it aside. Not good.

No, I don’t have explosives in my bag

After identifying it as mine, the TSA lady opened up my bag. My wife had packed me a substantial amount of homemade snack food, and she asked what a few items were. It was understandable, considering the homemade fruit roll ups do look a little suspicious.

She did an explosives swab of one of the bags, and I could tell it came back negative by the sound the machine made. After pulling out a second paper, she did a swab of the interior perimeter of the bag and inserted it into the machine.

Which set off a series of beeps a few seconds later that I had never heard before. Great. That can’t be good.

Another TSA agent came by, explains that my bag had tested positive for explosive residue, and informed me that he had to give me a pat down and that my entire bag would have to be searched.

At this point I was screaming inside my head, “Really, people?!?! This is the tiny Arcata Airport! Do I honestly look that suspicious to you?”

But instead I just said, “OK,” keeping my explosive reaction to myself. I wanted to say, “OK, whatever, this is why I can’t stand you guys,” but I kept my feelings to myself.

So I just stood there, holding my arms straight out to each side while TSA man gave me a full pat down while TSA lady searched my entire bag for the explosives that I supposedly had stashed in their somewhere. If there were any, I wasn’t aware of them. Maybe my wife makes explosives in her spare time and somehow forgot to inform me of her strange hobby.

The entire ordeal lasted about 12-15 minutes. A few people were staring at me, but by the time my full pat pat down from the TSA man was over, I didn’t care. I just wanted my bag back with enough time to pack it neatly before having to run onto the plane. It was almost boarding time. I hadn’t expected to burn this much time or have this much difficulty getting through security.

Fortunately, we were soon airborne, leaving my TSA troubles far behind.

Ok, I guess I should be thankful for the TSA

I do understand the need for airport and aircraft security. I really do. But the methods of the TSA often boggle my mind. And their statistics on what gets through them are less than stellar. Undoubtedly, they were just following protocol, but I didn’t have to like it. This is the first time I had ever set off the explosives scanner, and I hope I never do it again.

I have heard so many stories of people’s hands causing false positives for the explosives screening, especially if they have been on or near a farm. The whole thing is really a farce, anyway, since the TSA doesn’t even check everyone’s hands, just a random sample.

What about you? Do you have any crazy TSA stories?