Last summer I was presented with the wonderful opportunity to be a part of our church’s mission team to Guatemala. I was blessed beyond words by the experience, and I already long to return. Our church supports a few different fellowships in Guatemala, and we try to send a team down once per year to do outreach and to be an encouragement to our fellow believers. 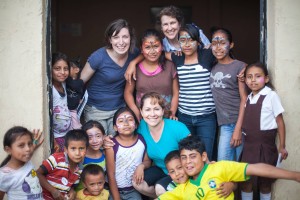 With the kids in Los Ocotes. Image courtesy of Mrotzek Photography.

For this trip I was both short on cash and short on time off. From the beginning, I wasn’t sure if it would work out. I had already planned a summer vacation for my wife and myself, and those plans were locked in. The Guatemala trip would begin a mere two weeks after our vacation. Providentially, everything worked out. I was able to get my boss’ approval to go, sacrificing roughly a week of pay, and I used United and Southwest miles to cover the trip. What is typically about a $1,100+ round-trip from Arcata-Eureka to Guatemala cost me only $450, all said and done, including a night of hotel on an overnight layover and rental car back from the Bay Area. It was not the best use of miles from a $/point perspective, but it was the perfect use of miles considering the experience and fellowship that I had.

The beginning of the trip was an awful red-eye flight leaving SFO at 1 a.m., but it was also in business class. Award availability was slim pickings for the summer when I booked, and I was lucky to even get that award out of SFO. The ticket was actually a partner award flight, and this was my first time in the skies with Avianca and Copa. After a one hour layover in San Salvador, I arrived in Managua, Nicaragua, my first destination. 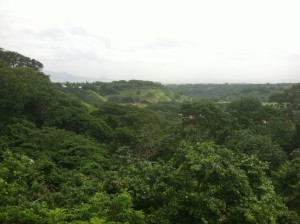 Nicaragua. I was too exhausted to remember to take many pictures.

I purposely planned this 2 day stop to see a friend. He runs a ministry that helps both rescues women and children from sexual slavery, and also helps many of them get on their feet with a sustainable business. He also boldly preaches the gospel to them, as the only true change is by the grace and power of God. Previously, during three different trips to Mexico, God was able to use my friend as a mentor and agent of change in my own life. He had since moved onward to Nicaragua, and it was so great to see him. A movie is coming out soon that explains a lot of his work.

After the two days in Nicaragua, I was sorta caught up on sleep. My friend drove me to a nearby gas station which is a taxi hub, and I caught a ride in a taxi for like $8 the rest of the way to the airport. Two hours later I was in the sky on my way to Guatemala. It was a fairly short flight. As we were on our final descent into La Aurora Airport, I was awed by the sight of a volcano cone beyond the city. It was already obvious that Guatemala was an exquisitely beautiful country. 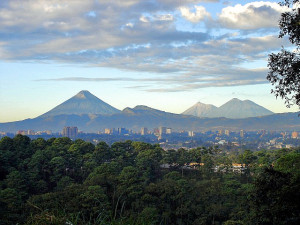 I met the team at the airport, arriving just an hour before they did. Clearing customs was easy, and I waited just outside the arrivals area but still inside the airport, per instructions. They were all exhausted after an overnight series of flights that had started at 8:00 p.m. the previous night. We were soon off to lunch and then to our lodging near the small church in Los Ocotes.

Even amidst the exhaustion, we had a great first night sharing and helping in the church service in Calvary Chapel Los Ocotes. The church is in a very poor area about 45 minutes from the middle of Guatemala City. We had three full days of ministry in the community. The mornings were filled with preparations, worship, and home visits and prayer outreach to families in the community, and the afternoons were filled with a VBS program for the kids. 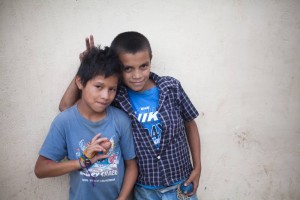 Manolo and a friend. Image courtesy of Mrotzek Photography.

And we were there to share with them the only person we truly need in this life: Jesus Christ. It brought me great joy to spend time with kids and their families, sharing with them from the Bible, and telling them about Christ and God’s grace toward us. I realized just how much Christ transcends nationality, culture, and station in life. Here we are, just arrived from one of the wealthiest countries in the world to one of the poorest nations in the western hemisphere, hardly speaking their language, belonging to a very different culture, and yet we had great fellowship with the believers their simply because we share a common faith in our Lord. It always amazes me. 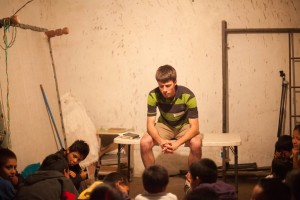 Me teaching (or attempting to in Spanish) the kids in Capilla Calvario Los Ocotes.

Our brief time in Los Ocotes ended and we moved on to visit the small fellowship in Pasabien. I fell equally in love with the place and people, and I am desperately yearning to go back. We ministered in the local schools, met many people in the community, and encouraged the youth who faithfully attend the classes and church led by Pastor Francisco. It was wonderful to see his heart toward the community and the work that the Lord is doing through him. 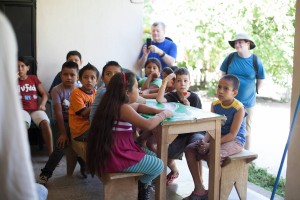 The kids who attend after school lessons at Pastor Francisco’s house in Pasabien. Image courtesy of Mrotzek Photography.

Two days was nowhere near enough. As the bus was headed back to the hotel for our final night in Pasabien, we watched as the last of the kids walked away, still waving, down the road and into the darkness. I couldn’t hold the tears back. It all passed so quickly. 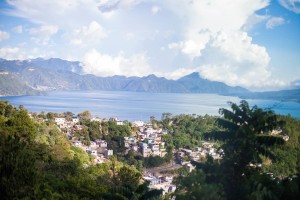 Lake Atitlan. I missed the day of rest there. Image courtesy of Mrotzek Photography.

Returning home wasn’t easy. I wished with all my heart that I could stay, but work and life in the U.S. were waiting for me. As it turned out, I had to leave the team before their extra day at Lake Atitlan, intending to be back at work by Friday night. As things would have it, I missed a connection in Los Angeles and showed up hours late. But by the end of the day I hardly cared. It had been a wonderful trip. I know will be back in the Land of the Mayas again soon.