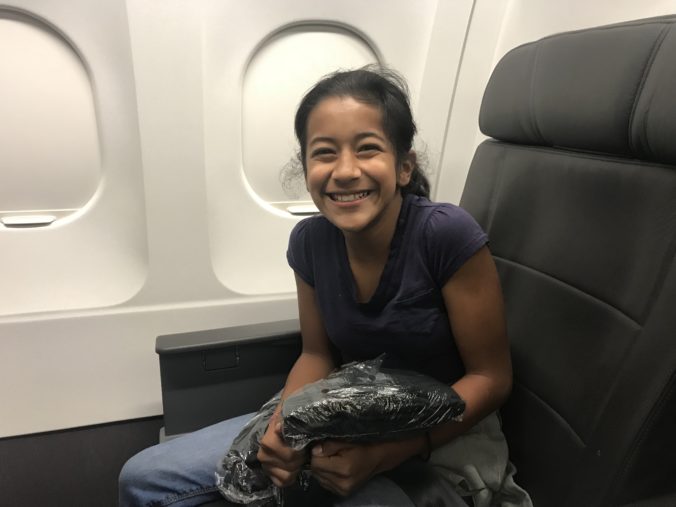 My daughter and I spent last weekend in San Antonio with friends that we met while in Costa Rica on our adoption trip. We and the Minors were in Costa Rica at the same time, adopting our kids through the same agency. We were even staying at the same hotel while in country. They adopted a girl about our daughters age, and the two became fast friends.

Our trip to San Antonio was planned to get the girls together for the first time since all of us have been back in the U.S. (SEE: Planning a Surprise Birthday Trip). The trip was be short and sweet, as we flew out Friday and headed back Tuesday.

During our first flight on the way to the Lone Star State, my daughter remarked how cool it would be to fly in first class. I’d previously told her about my solo trip to Australia and how I’d flown in first class and business class on the two international long-haul flights (SEE: United Polaris First SFO to ICN: A review, AND: Asiana business class review Seoul to Sydney). Obviously, it sounded amazing to her. I had to break it to her that domestic first class really isn’t all that amazing. But it is certainly a step up from economy.

A case of perfect timing

A couple weeks before we booked our trip to San Antonio, I’d accepted a status offer from American Airlines. I wasn’t sure I’d even bother with it, as I basically never fly American, but I decided to jump on it at the last minute before the offer expired. The offer gave me American Gold Elite, the lowest tier status, and eight 500-mile upgrade certificates. The status is only good through September.

As it turns out, the offer worked perfectly for me. The cheapest flights out of Sacramento to San Antonio happened to be on American Airlines, and the status offer meant that I could apply my 500-mile upgrade certificates to our flights. As I ended up booking a flight for work on American Airlines as well, I ended up only applying 4 of the certificates to upgrade one leg of our outbound flights.

Honestly, as I was only a Gold member, I didn’t expect them to clear. Especially given that American A319s only have 8 first class seats.

But amazingly they did. I was excited, knowing that my daughter was in for a treat.

Our first class was on time and uneventful. We spent half an hour in the lounge in Phoenix, and then we headed to our next gate. I handed my daughter her boarding pass to scan for boarding. Once heading down the jetway, I asked her which seat she was in.

She told me “1F.” That’s it. Not another word. She had no idea what that meant. I see that I need to teach her some basics about seat numbers. Row 1 is pretty much always first or business class (unless you’re on my least favorite type of plane).

I’ve tried to clue the kids in to the boarding process and general plane etiquette. But they still have very little idea about seating. My son may have put two and two together on this one, but the fact that we were in row 1 didn’t even register with my daughter.

Until we got on the plane, that is, and she saw that Row 1 was the first class section. The excitement was instantly off the charts. 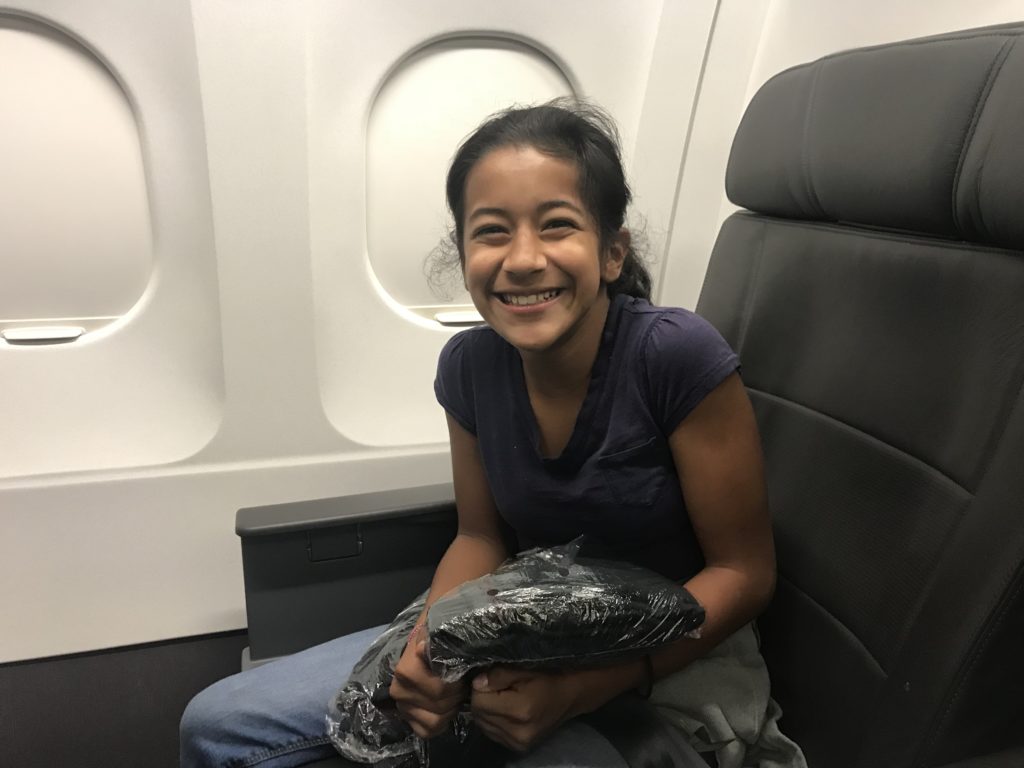 We had a great flight of ~850 miles to San Antonio. While I’ve recently flown United domestic first class on the ERJ-175, this was my first time on American (and it might be my last, as my upgrades on my work trip haven’t been clearing so far). 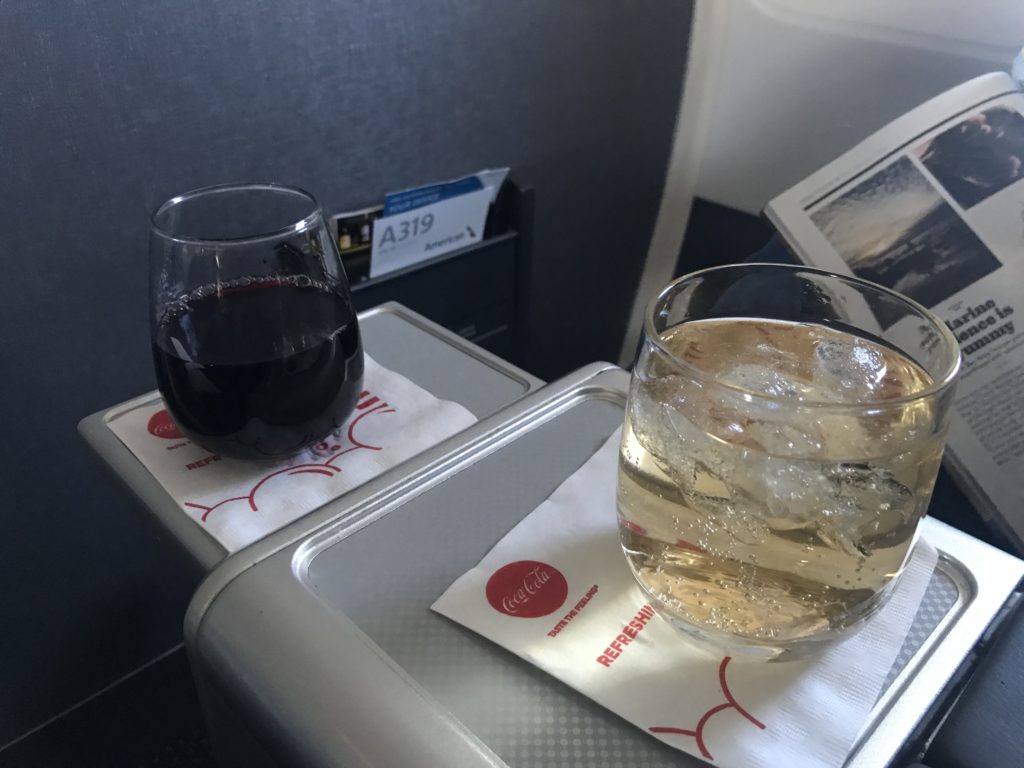 It was a real airplane nap, something I haven’t had in a while. I woke up super groggy after 45 minutes as we were coming in for landing. My daughter said I looked like I was dead while I was sleeping and that my tongue was hanging out. I’m going to hope that is mostly her own fabrication.

I had to break it to her that on our return we wouldn’t be flying in First. Can’t get to used to life of luxury now, can we? 😉 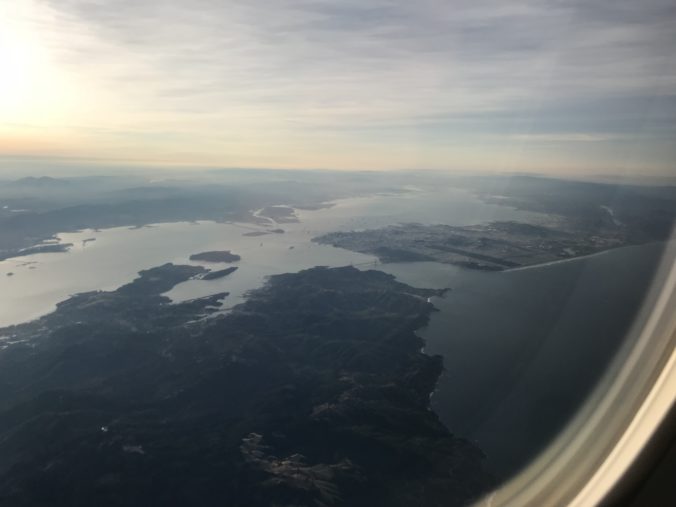 Getting My First Complimentary Upgrade Ever

This coincided nicely with a work trip. I’ve flown Delta lately when headed east, which is my personal preference. But this time I couldn’t justify the expense and time of the drive to the Bay. So United it was out of our tiny local airport. At least this could be my first-ever shot at an upgrade.

When I checked in, I was told I’d be placed on the list for complimentary upgrades. I had high hopes for my first flight of the day. Only five first class seats were booked, leaving seven available for upgrades. There can’t be *that* many people with United status flying out of Arcata, can there? But I’d have to wait until the next day to find out.

Much to my surprise, the confirmation came within the hour. I received an automated email from United saying I’d been upgraded, and that my new seat was 4A. Score! 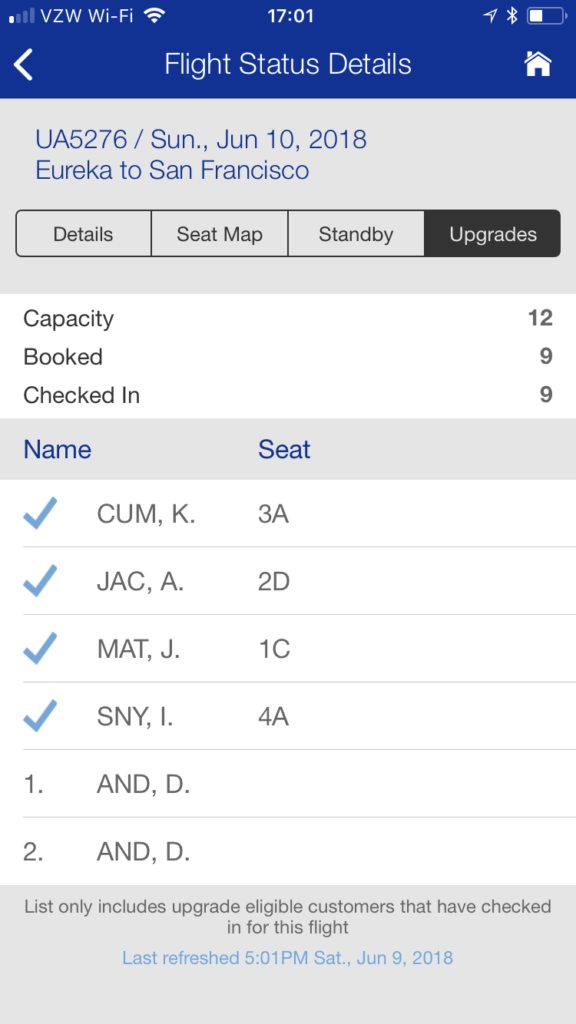 I had understood this wouldn’t be processed until the day of travel. But the news was happily welcomed. I’d even landed in one of the awesome seats along the left side of the plane that is both a window and an aisle seat. This really couldn’t be any better. 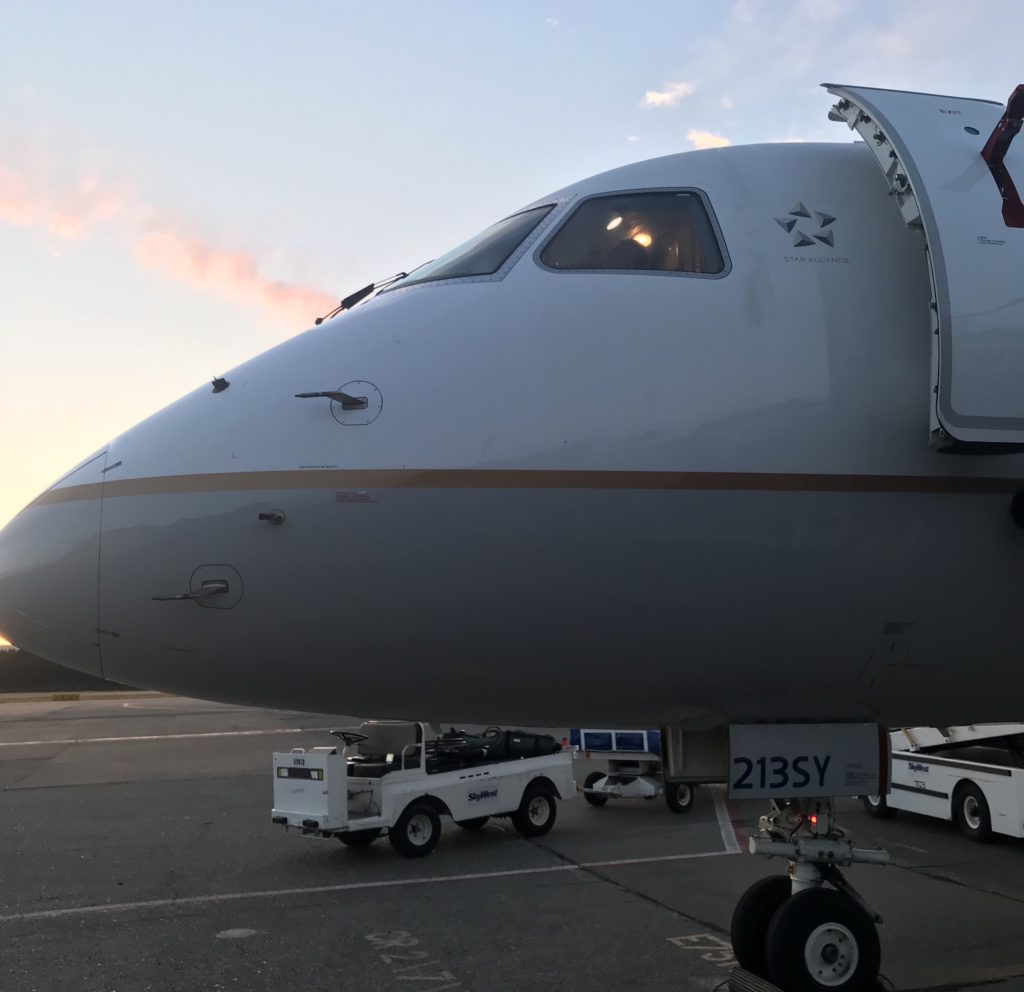 Flying in first for thirty-seven minutes

I was among the first to board the next day, and I got to gaze out the window and watch the other passengers climb the ramp to the plane. The flight attendant brought me an orange juice while I waited for everyone else to take their seats. It was a lovely Humboldt County morning.

We departed on time, and the flight attendant began beverage service as soon as we reached 10,000 feet. I requested a coffee. Unlike the economy experience, it came in an actual mug. 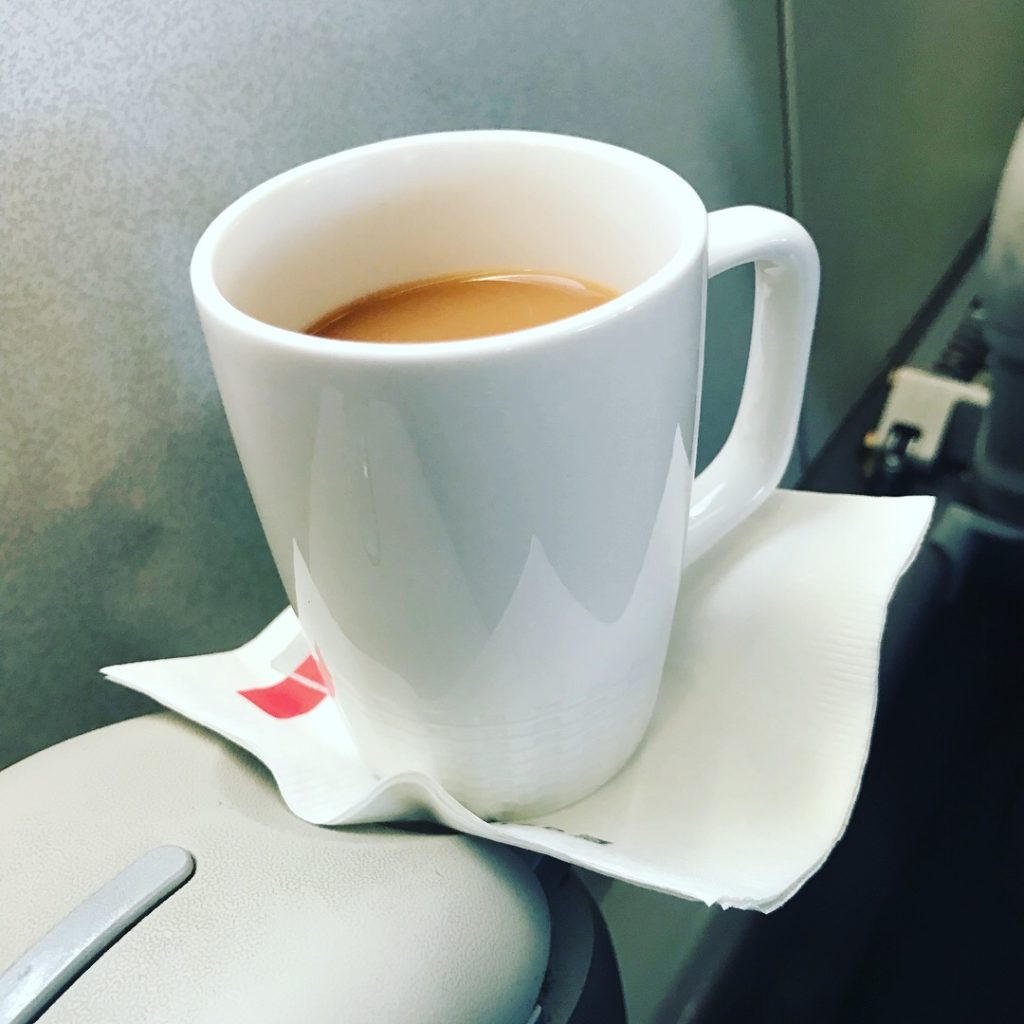 The flight attendant also brought around a basket loaded with snacks. We could pick what we wanted. I opted for just a stroopwafel.

The flight is a super short hop. I’ve done it many times in economy, and it’s a totally enjoyable experience on the ERJ-175. But it was super cool to be up in first this time. Even after all my flight segments, this was (amazingly) my first time traveling in domestic first class. I’ve traveled in international business class and first class once each, which is a different world entirely.

The misplaced focus on airline status

In the majority of cases, airline status is something that should be earned 100% organically. That is, if you have to expend extra effort or money to achieve status, you probably aren’t flying enough to really enjoy the benefits.

Even after saying this, I am on track to earn Delta Gold Medallion status this year. A couple work trips, plus our trip to France (paid with mostly points, but a cash fare), and some extra medallion qualifying miles (MQMs) from card bonuses makes it a fairly easy target. I’m losing a bit on opportunity cost, as Delta miles aren’t quite as valuable as other currencies. But it’s still something I’d like to shoot for while it is within reach and won’t cost any extra cash out the door [SEE: How to earn airline elite status without flying (a lot)].

Although I could certainly get used to traveling like this, I have to remember that status won’t last forever. And it won’t always send me to the front of the plane. But even though it was just a 37-minute hop from Arcata to San Francisco, it was still super cool to sit in the front of the plane without shelling out either miles or cash. The ERJ-175 may be the nicest ride in domestic first class, too, even over larger aircraft. The ‘A’ seats are also by themselves, giving you both a window and aisle access.

Will I get upgraded again? Why, yes. I’m currently waiting to depart on the second leg my current trip, and I had another upgrade clear. Maybe it will be hard to go back to economy after this. 😉