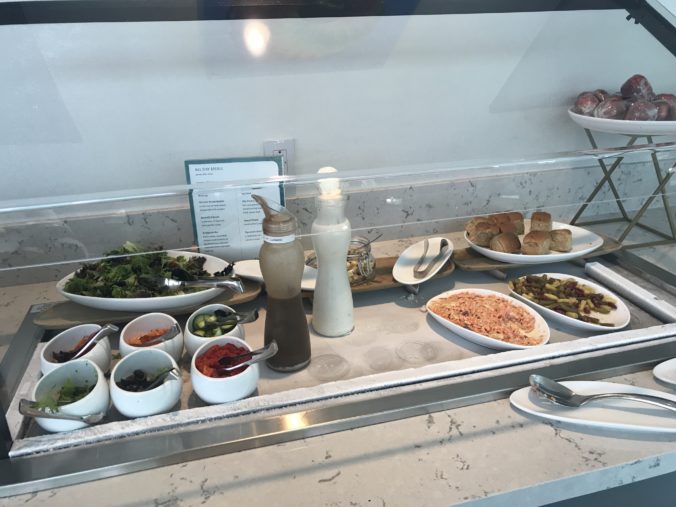 The Club at DFW Review

My daughter and I transited Dallas-Fort Worth International Airport (DFW) last week on our way to South America, and with a 7-hour layover, we had plenty of time to hop through a couple lounges. The first we hit up was The Club at DFW using my Priority Pass membership.

The Club at DFW is located in Terminal D. We’d landed at Terminal A, so we had to take the skytrain several stops until we arrived on the other side of the airport. The Club at DFW is located near Gate 27, on the mezzanine level of the airport. If you head into the middle of the cluster of shops, you’ll see the lounge at the escalator leading to it. 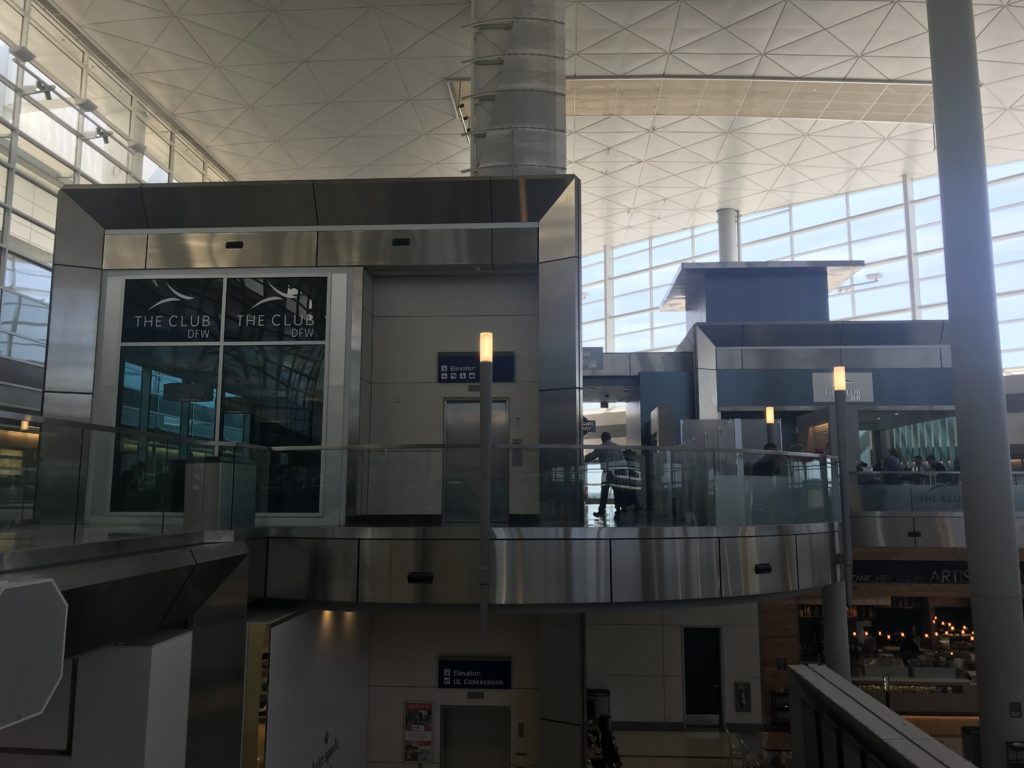 Head up, and turn right. You might be confused where to go from there, as the lounge is actually broken into multiple areas, but the signs should help. 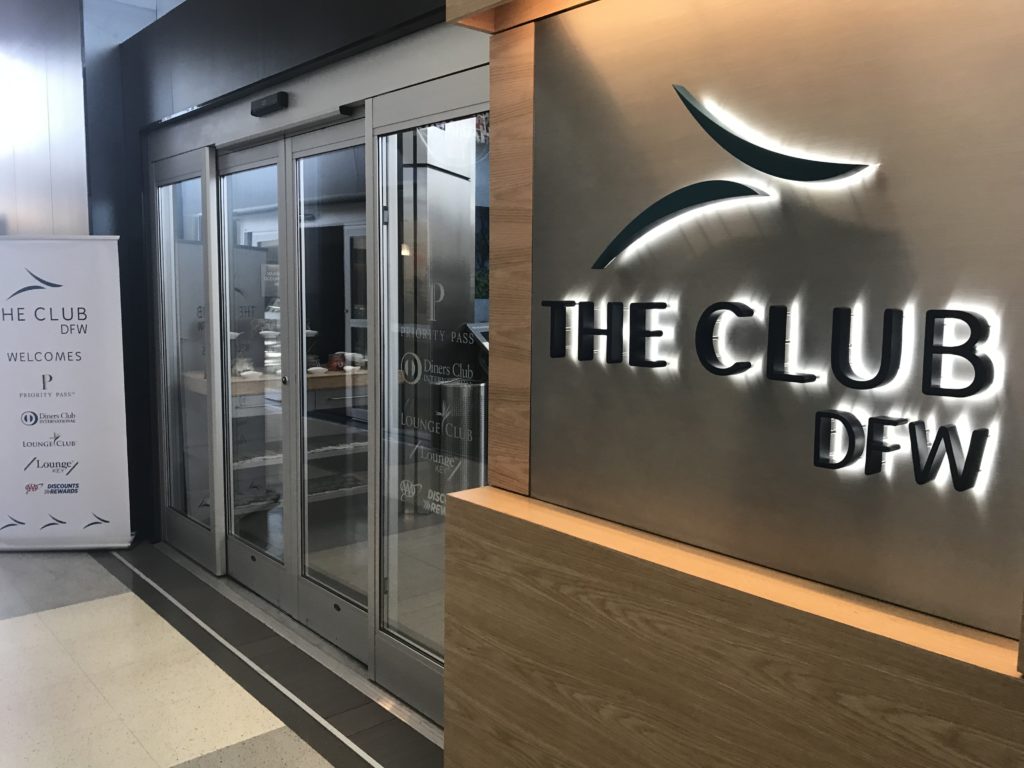 We were greeted warmly by the attending lounge agent, and she scanned our boarding passes and my Priority Pass card. As this is the membership card from my Chase Sapphire Reserve, I can guest in up to two people for free. However, as is common with “The Club” network of lounges, kids 12 and under are free at The Club at DFW. This makes it a great choice if you’re traveling as a family. Unless you have more than one teen, you can get everyone in for free.

Layout and seating of The Club at DFW

The lounge agent explained the lounge to us, as it was our first visit. There are a couple different spaces, and it is a bit more unique than the other The Club lounges I’ve visited. There are a few different sections, including the dining and beverage section, an open-air business center, and then the “Relax” area meant to be more quiet.

As the dining section was pretty full, we opted for the Relax section, which is glassed in and had pleasant jazz music playing. 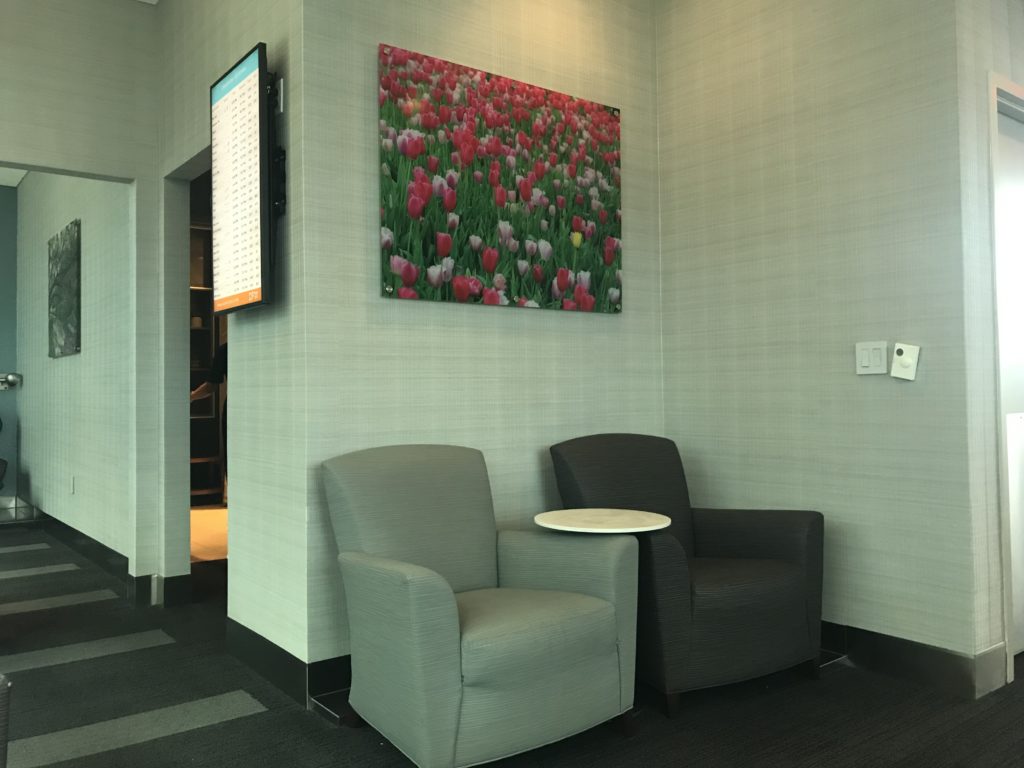 The seats are comfortable, and there is an ample number of power outlets for keeping your devices charged. Such a necessity in our modern connected world. It’s sad that heading to a lounge and not finding a seat with a plug for my laptop power cord is a source of frustration. 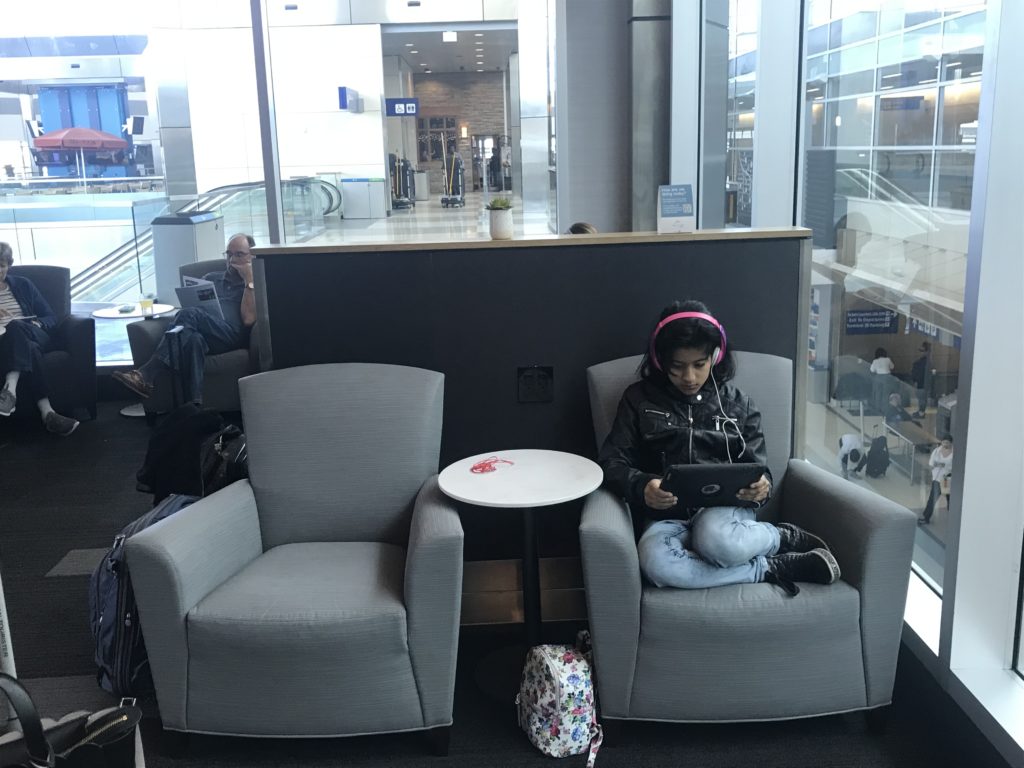 The open-air business area was a popular spot. Open-air being open to the terminal, not the warm Texas air. 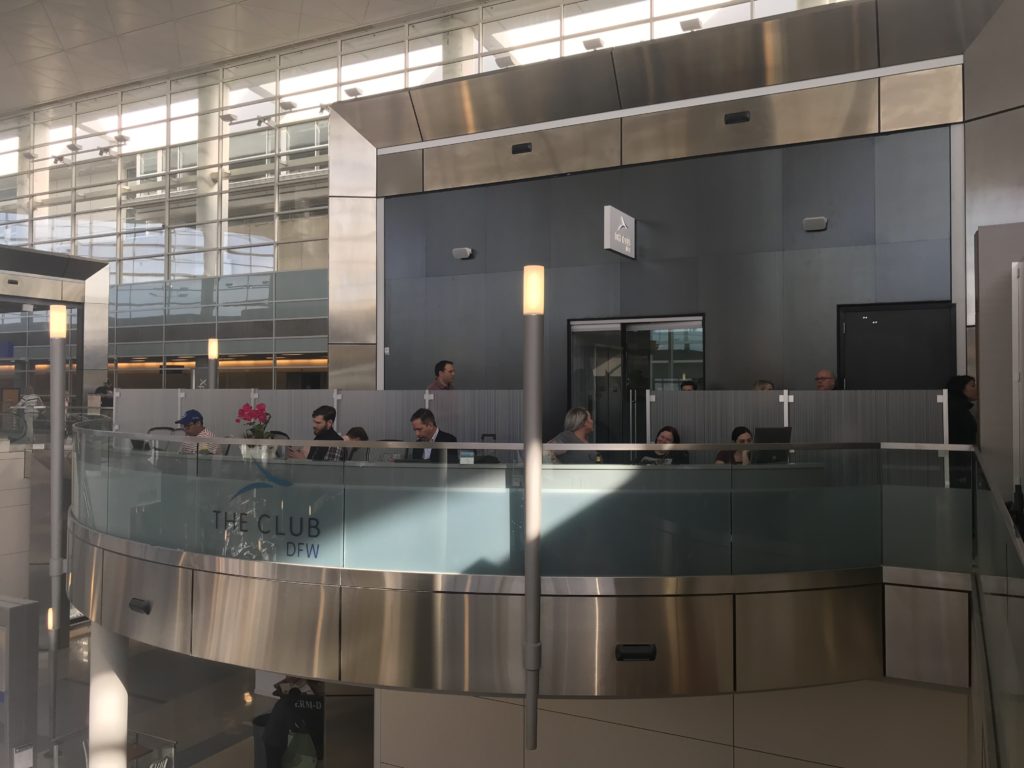 It’d be cool if the lounge had views of aircraft or the runway, but you instead look out over airport shopping below. 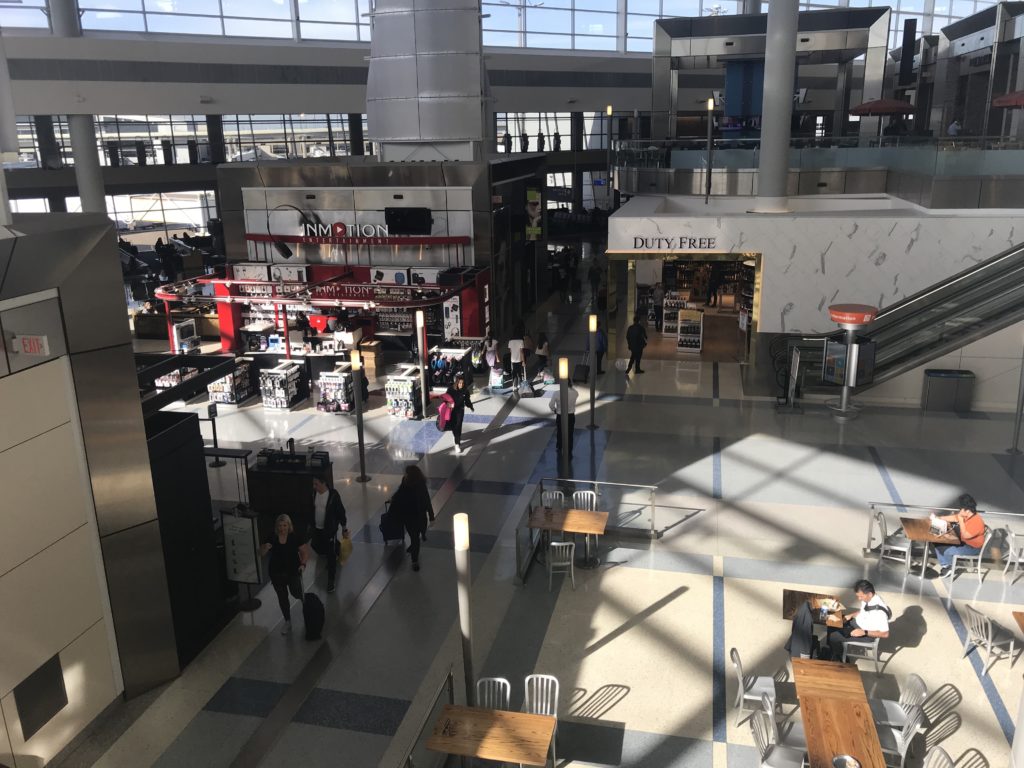 Past the check in desk to the left is the dining area. We did move over here later when thing thinned out a bit and we both felt like eating. 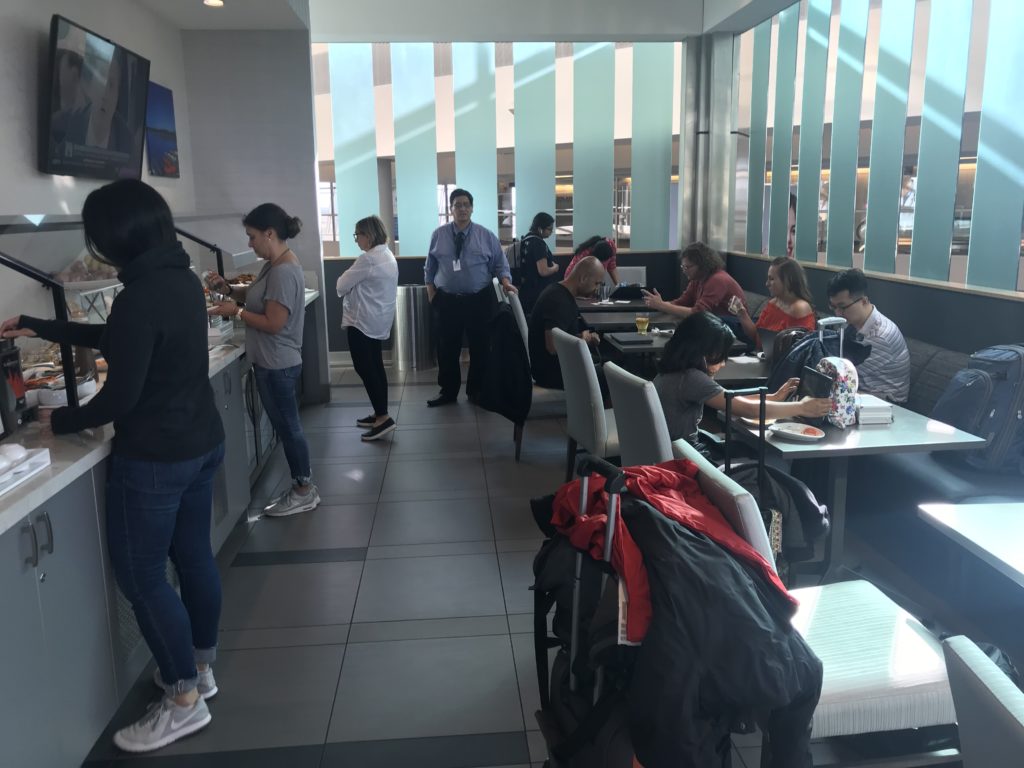 The Club at DFW is *not* a large lounge. The make do with the space they have, and the space itself is nice, but overall it isn’t that big. Agents were often checking to see if seats were full, and I heard them call in on a walkie talkie a couple times how many were available in one of the areas. My guess is that The Club at DFW becomes capacity-controlled often.

The Club at DFW food and drink

I knew that we would be eating again later at the Premium Lounge as international business class customers, so we just snacked a bit at The Club at DFW. In the relax section there are some beverages, including soft drinks, coffee, and a lemonade tea beverage. I was expecting infused water, so both the sweetness and tang surprised me. It was quite good. 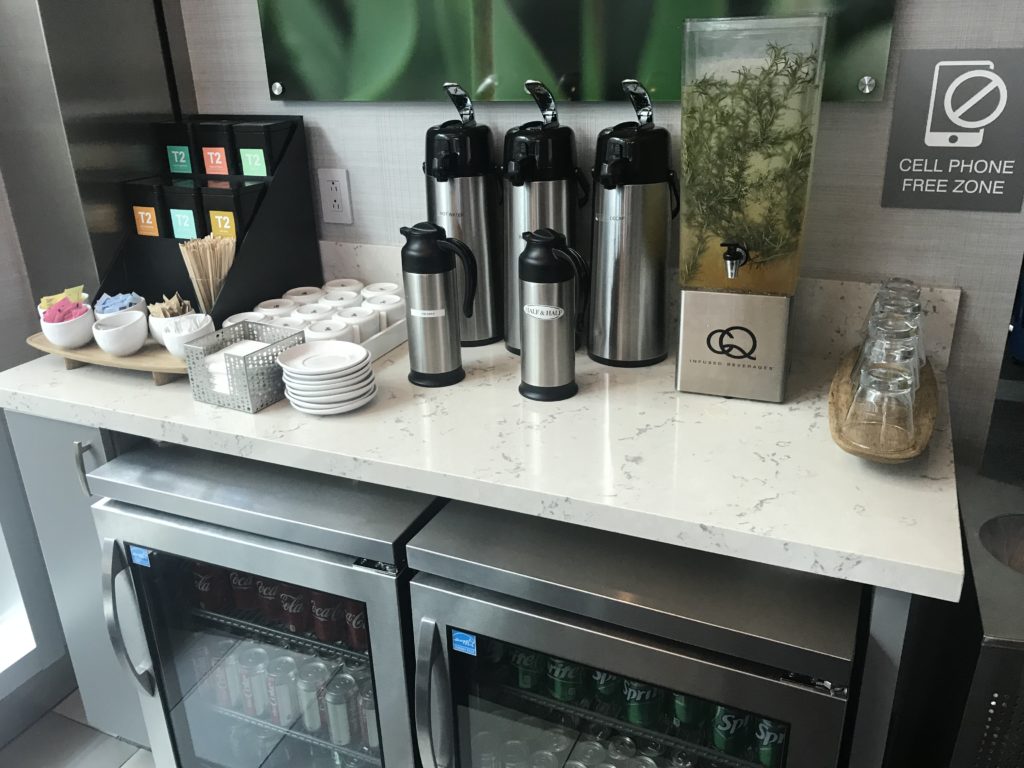 The food options included a small salad bar, rolls, sandwiches, wraps, brownies, cookies and fruit. This is all fairly typical of the Club lounges. There wasn’t really anything to distinguish The Club at DFW from that at SJC, or the one in Atlanta (SEE: The Club at ATL Review). 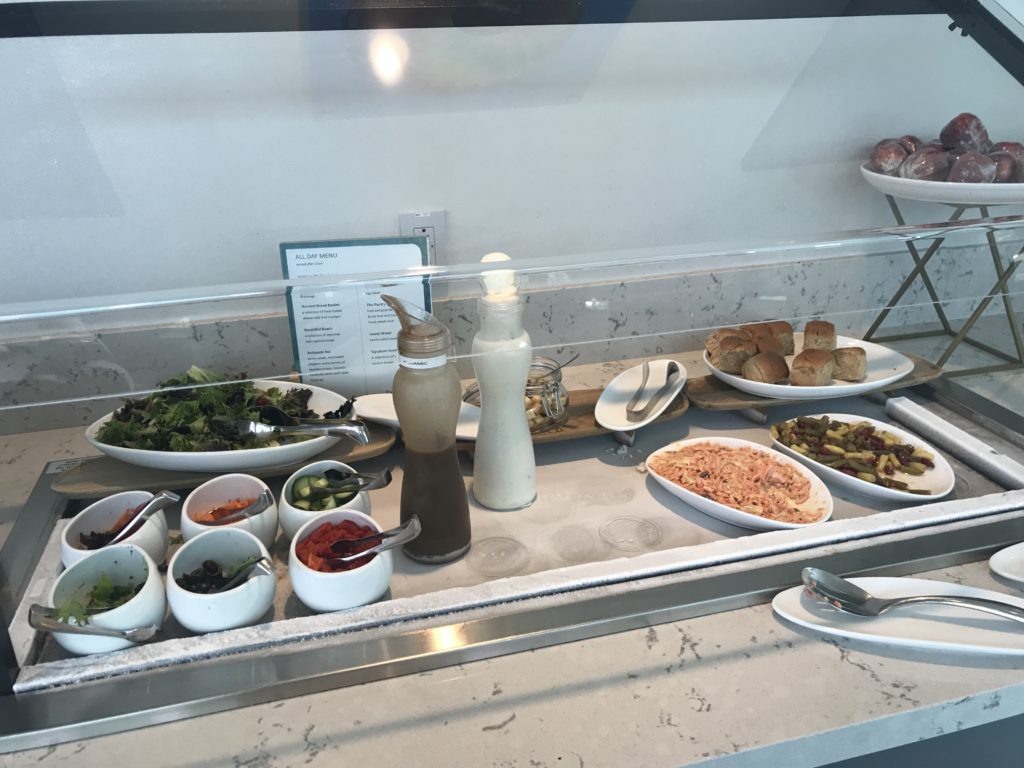 You also have a coffee machine and a selection of tea. There was also a soup. I cannot recall what it was that day. 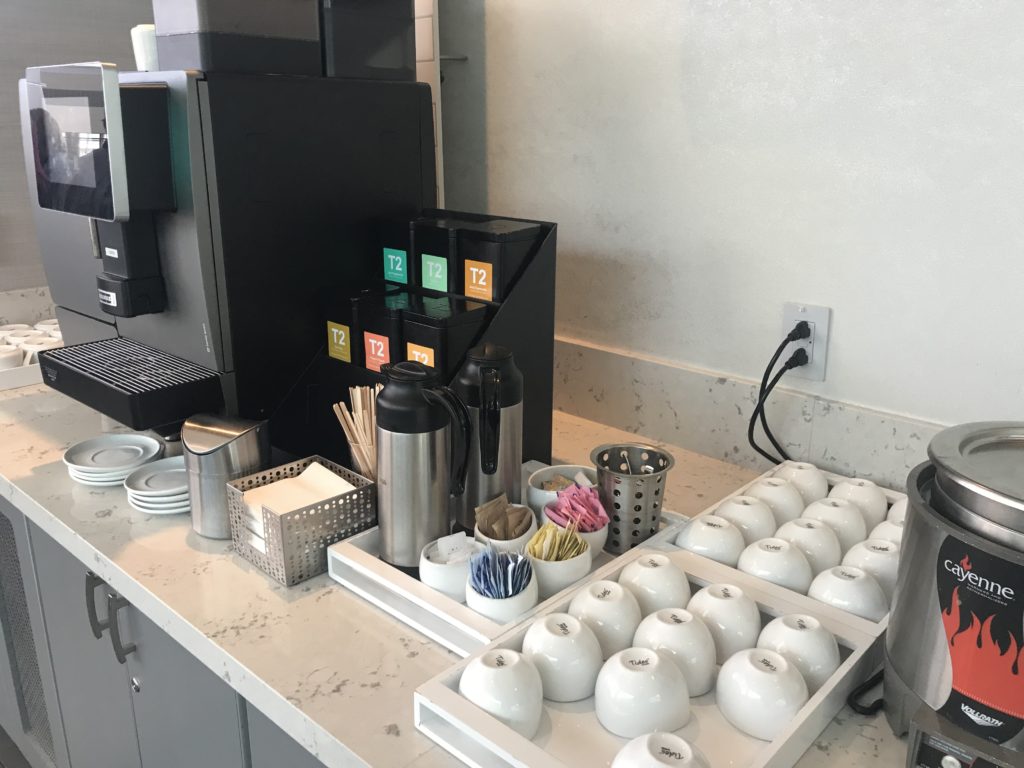 The bar is small and located behind the check in desk and is continually staffed. The Club lounges have a decent wine selection, and plenty of other options to choose from.

Other facilities of The Club at DFW

The Club at DFW may be the only lounge of this type that has a shower. At least it is the only one I know of. The shower is located in the restroom in the Relax section. 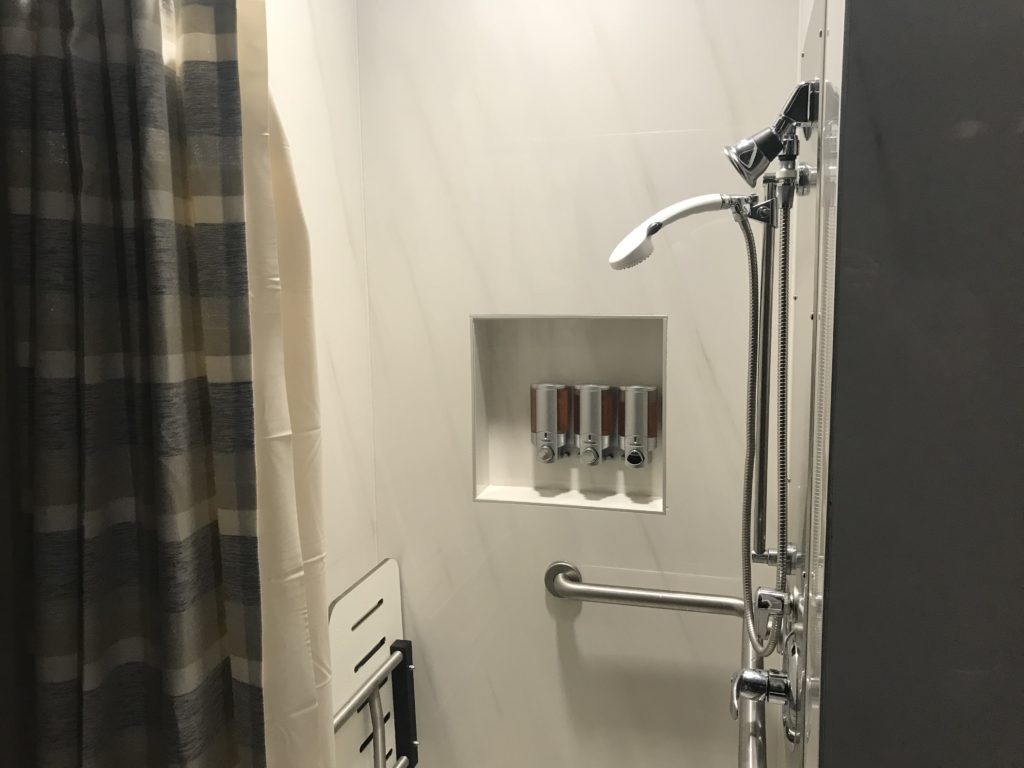 Note that this is the only restroom. If the shower is occupied and you need to use the facilities, you’ll need to exit the lounge and head across the mezzanine to the opposite side of the escalators for airport bathrooms. Not ideal, but easy enough to manage as they are maybe 100 feet from the lounge. 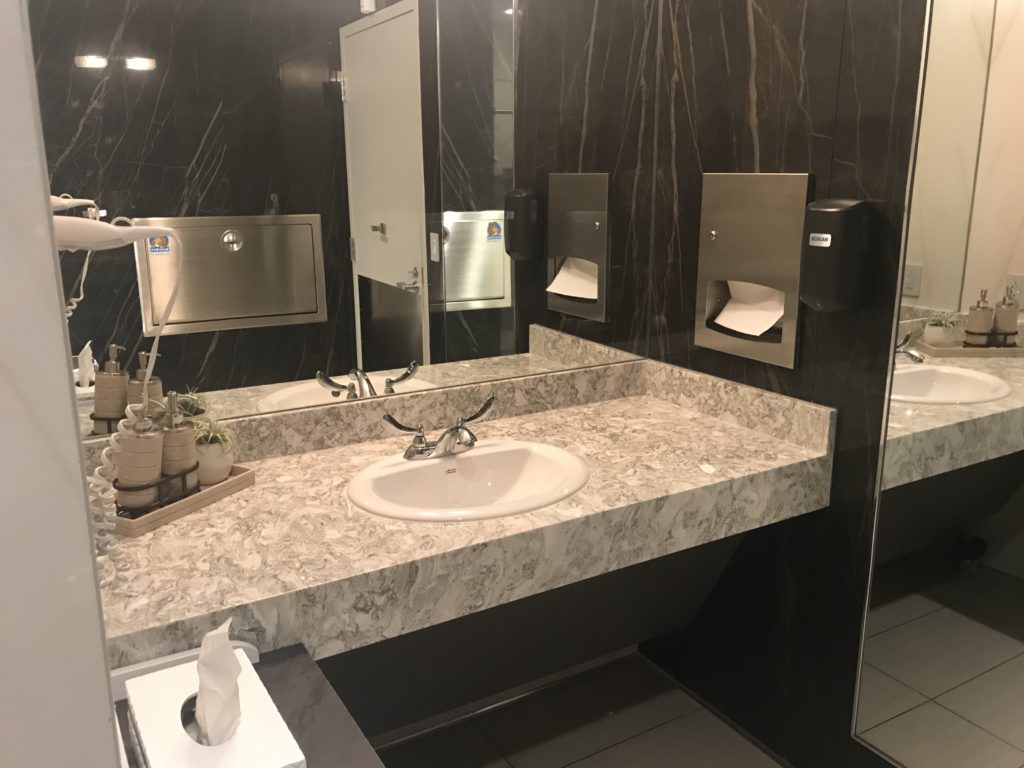 The WiFi was a bit of a struggle. Maybe it was just my computer. My daughter didn’t have much of an issue streaming Netflix, but I had trouble loading many web pages. We were also able to FaceTime friends (after moving to the dining area that was a bit more noisy), so the WiFi struggle may have just been my machine.

Overall, our experience was nice, and The Club at DFW might be my favorite of the lounges within The Club network. It is a solid domestic lounge if you have time to kill in Dallas while waiting for a flight. The primary drawbacks are getting there from other terminals, and also the size, as I’m sure it ends up capacity-controlled, especially considering the level of effort staff go through to manage seating.

Hope you enjoyed my review of The Club at DFW!