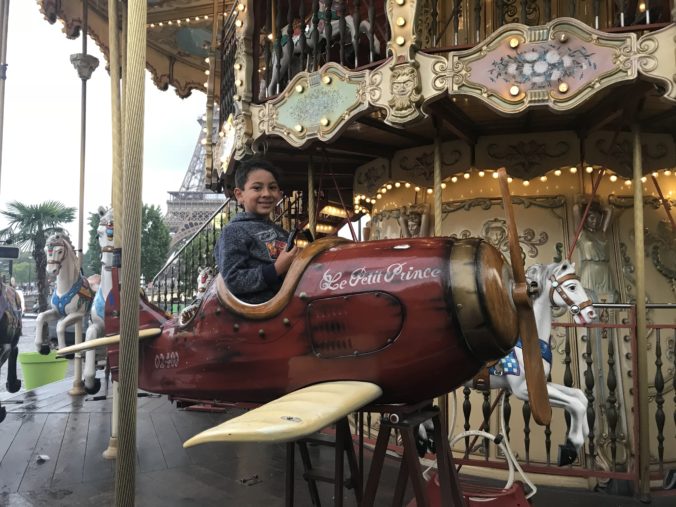 Once the kids were up and ready, we had breakfast at Aux Péchés Normands for the third time. It was already becoming tradition. The little bakery is a two minute walk from our hotel and offers great pastries, plus fresh coffee and juice. Fueled for the morning, we headed back toward where we’d began our adventures two days ago.

Notre Dame cathedral was both the first and last stop on our first day in the city. We’d enjoyed the view of the famous church from the square in front, returning later to enjoy the view from the towers.

But we’d missed one important piece: seeing the inside of the cathedral. This was what we intended to rectify today.

We arrived at Place Jean-Paul II to what seemed like an enormous line in front of Notre Dame. It extended the length of the square, and then wrapped around back towards the front of the Gothic cathedral. There really wasn’t any alternative to get inside, so we just joined the lengthy queue. 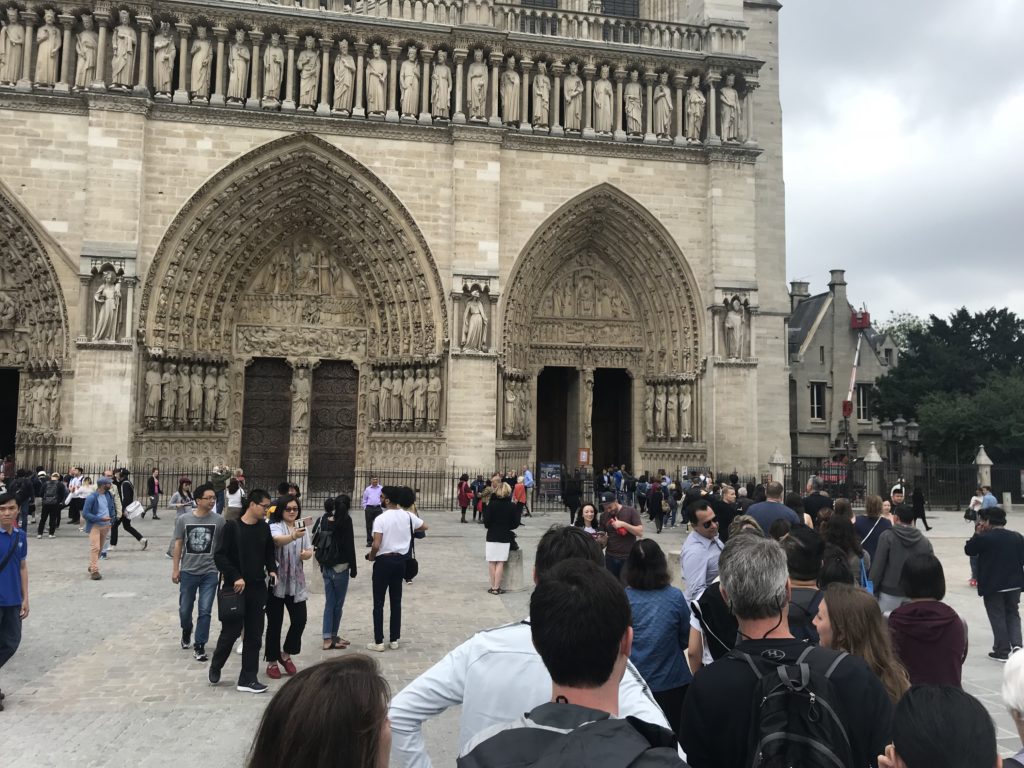 The line moved surprisingly quickly, and we were actually inside in under 10 minutes. The inside of Our Lady of Paris is just as lovely as her exterior. I love wandering around old cathedrals. When my wife and I visited Europe in 2016, we went to cathedrals in Milan, Florence and Dublin. 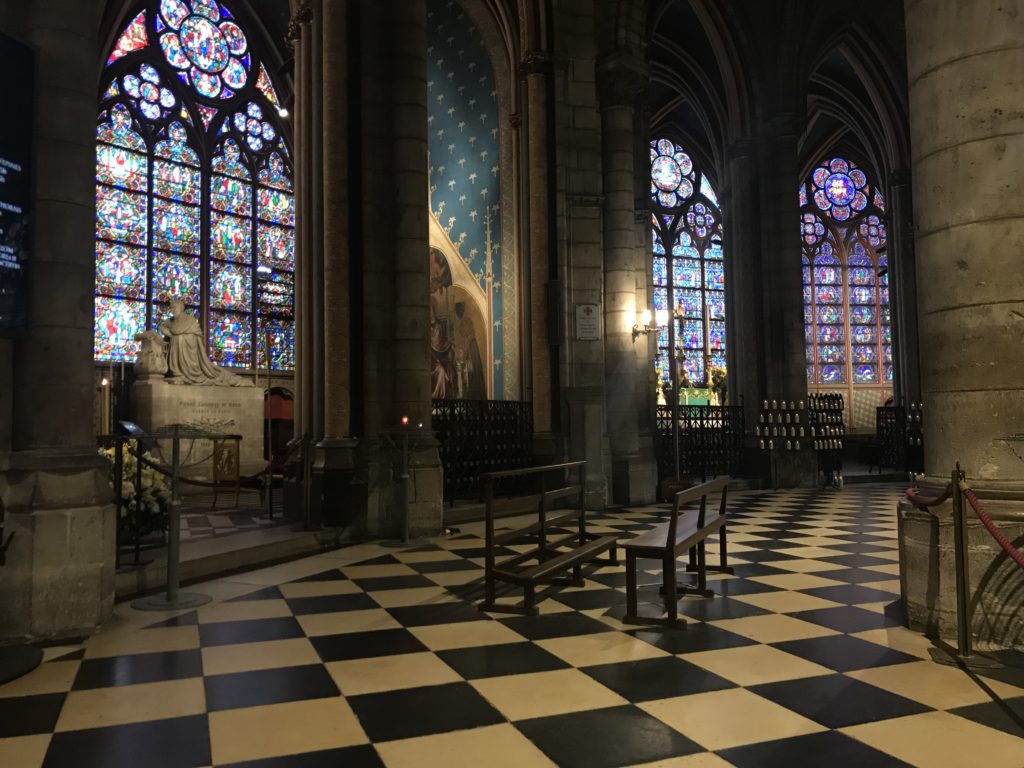 We didn’t stay especially long, just enough to take in the stained glass and immense feel of the cathedral. From Notre Dame we moved on to the other sights located on the Île de la Cité.

A short walk later and we were standing at the entrance to Saint-Chappelle, a beautiful chapel with some of the most impressive stained glass I have ever seen. The chapel isn’t very large, but the ceilings are high and the color is mesmerizing. 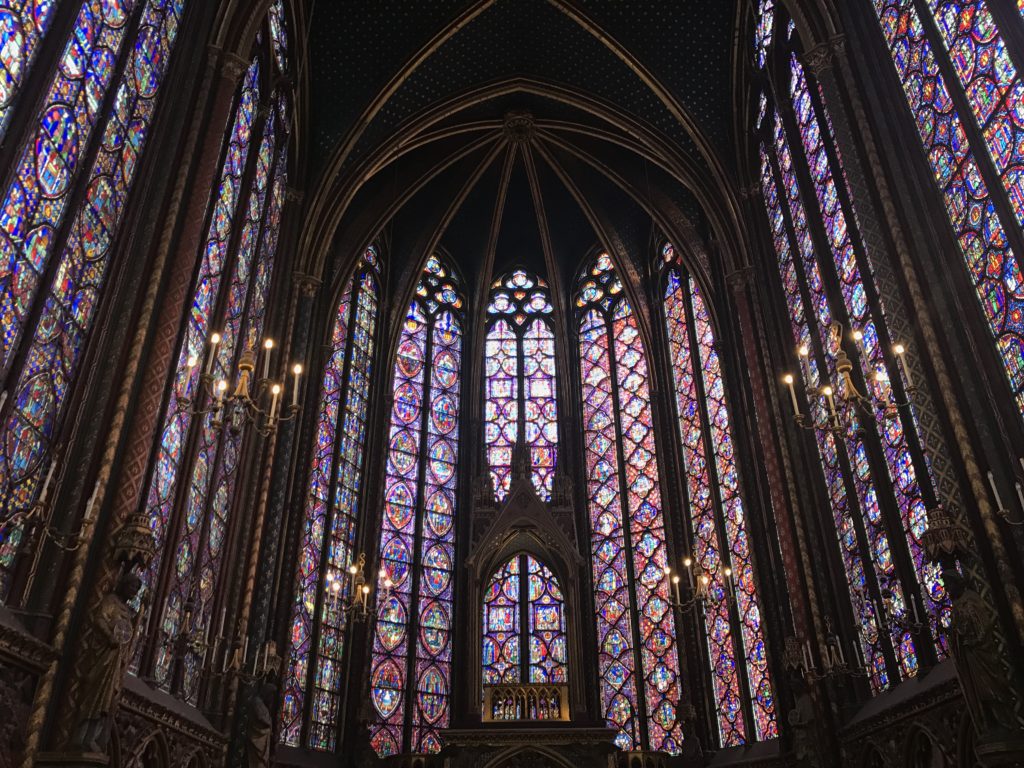 Sainte-Chappelle is part of the Palais de la Cité, the residence of the kings of France for centuries. In many ways it is equally as impressive as Notre Dame.

The kids and I enjoyed the stained glass and wandering both the upper and lower levels of Sainte-Chappelle before moving on to the Conciergerie, located just another short walk away.

The Conciergerie is another part of the royal palace on the island in the middle of the Seine, albeit an infamous part of it. It served a number of functions after the French kings moved to the palace across the river, before becoming an infamous part of the French Revolution. Many prisoners were held here before being executed by guillotine, including Marie Antoinette. 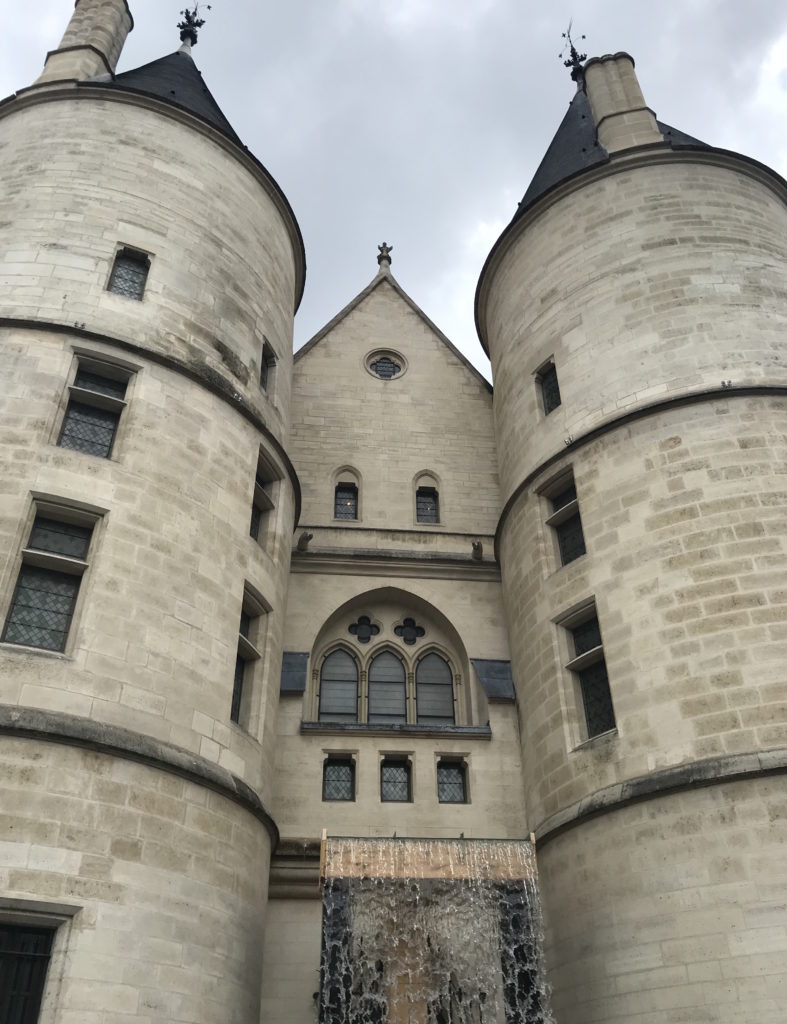 I was surprised by how bare the interior is kept. There were a few areas where you could read about the history of the building, but other than that, you just got to wander the bare stone rooms. Bare, that is, except for a flume that is oddly constructed through the space and results in the waterfall you see outside between the towers. 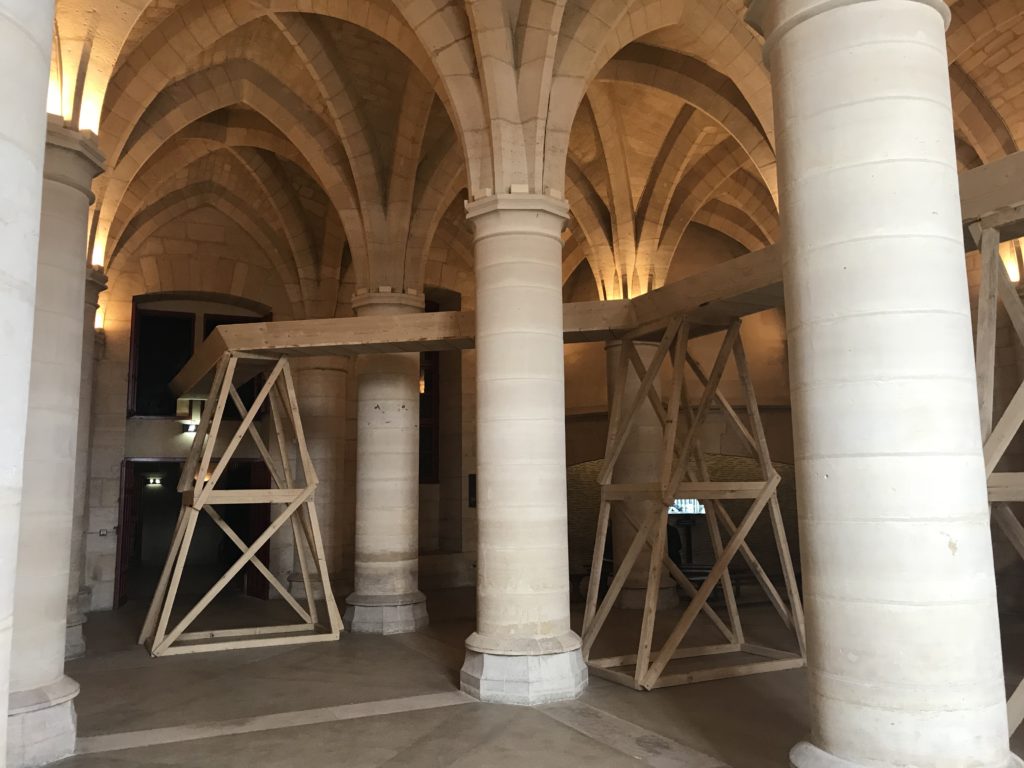 I did my best to relay my limited knowledge of the French Revolution to the kids. They were fascinated by the story of Marie Antoinette, asking again and again why she was killed. The fact that the revolutionaries killed her unjustly, hating her for her wealth and power as one of the French royals, was hard for them to get their minds around. 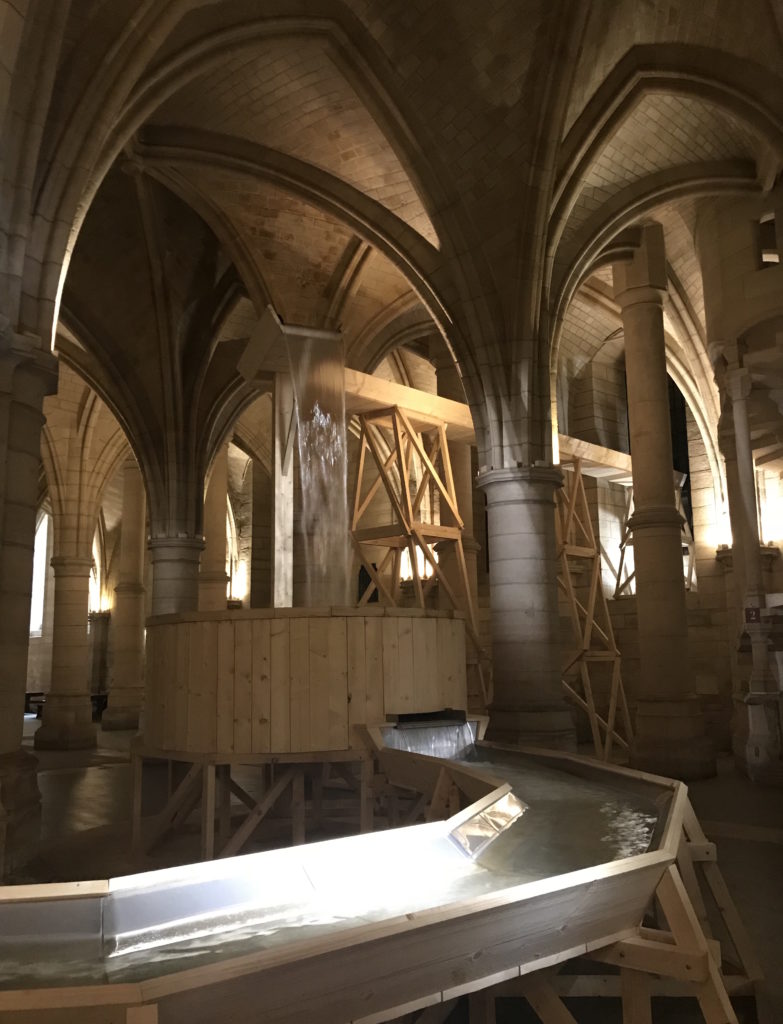 Even as we left the Conciergerie, the kids continued to ask about Marie Antoinette and what happened during the revolution. I was glad for the moment I could teach them a small nugget of history, right in the place where it happened.

From the Conciergerie we continued our stroll along the Île de la Cité, heading to the dock where one of the river cruise companies operates. Given how much we’d all been on our feet the previous day, I wanted to make sure we broke up our day a bit more with active versus passive activities. I made sure to plan a time where we could just sit and talk and take in Paris. A cruise on the Seine fit the bill perfectly. 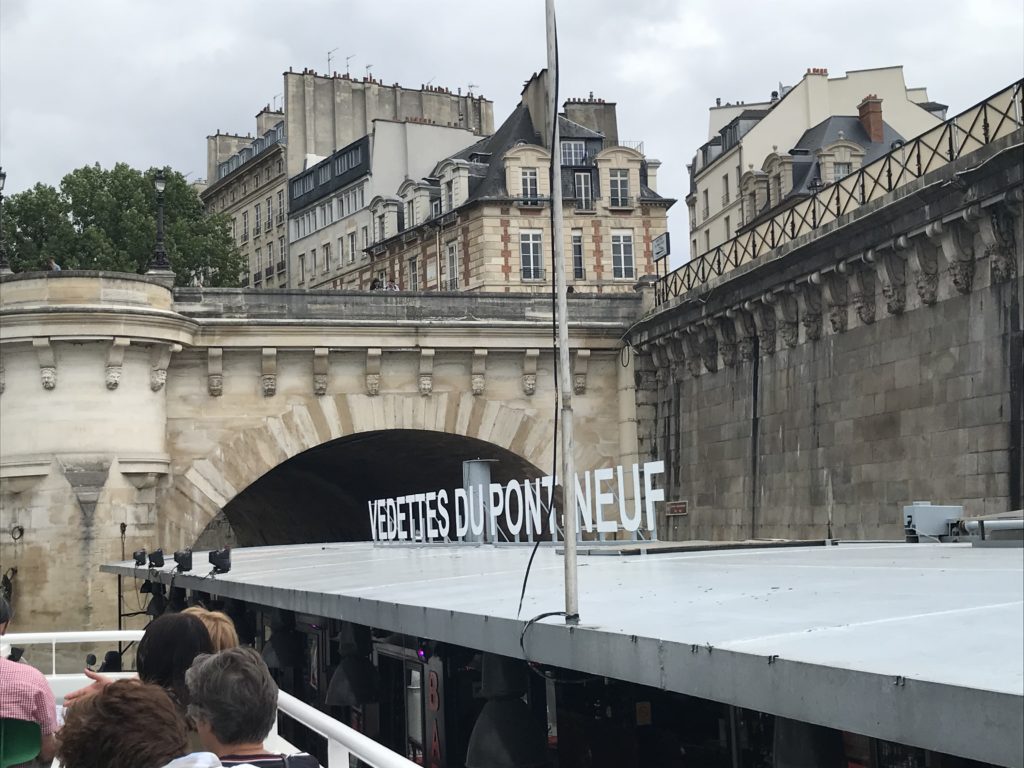 The tour company we used was fine, but there is serious room for improvement. Given the price of Paris in general, I was going for cheap. I’m sure there are better companies out there. The main drawback was that the tour guide did little more than point out 8-10 places in very thickly accented English. I caught most of what she said, but the kids hardly understood anything.

But it was still enjoyable to watch the city drift by from the water. The cruise took us from the Île de la Cité to the Eiffel Tower and back again. 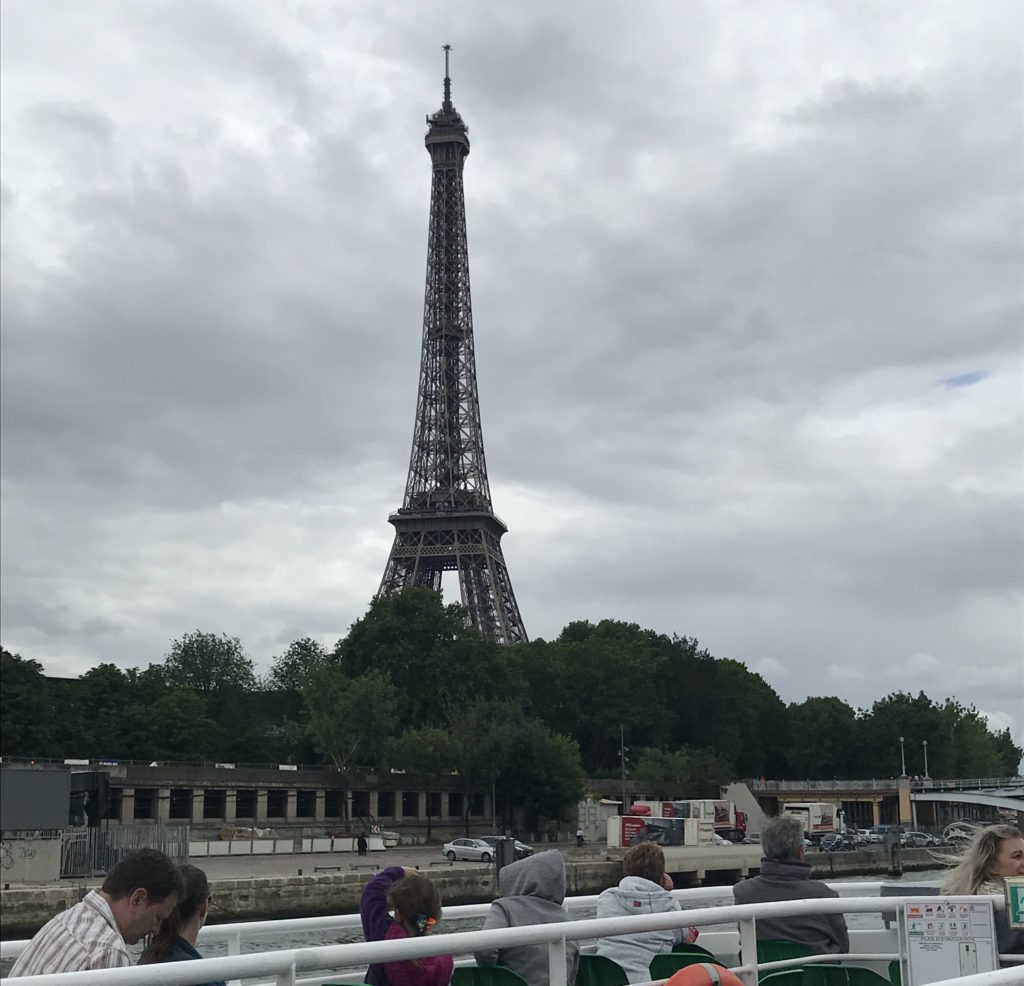 We also headed upriver briefly and passed by Notre Dame, which was a highlight from the water. 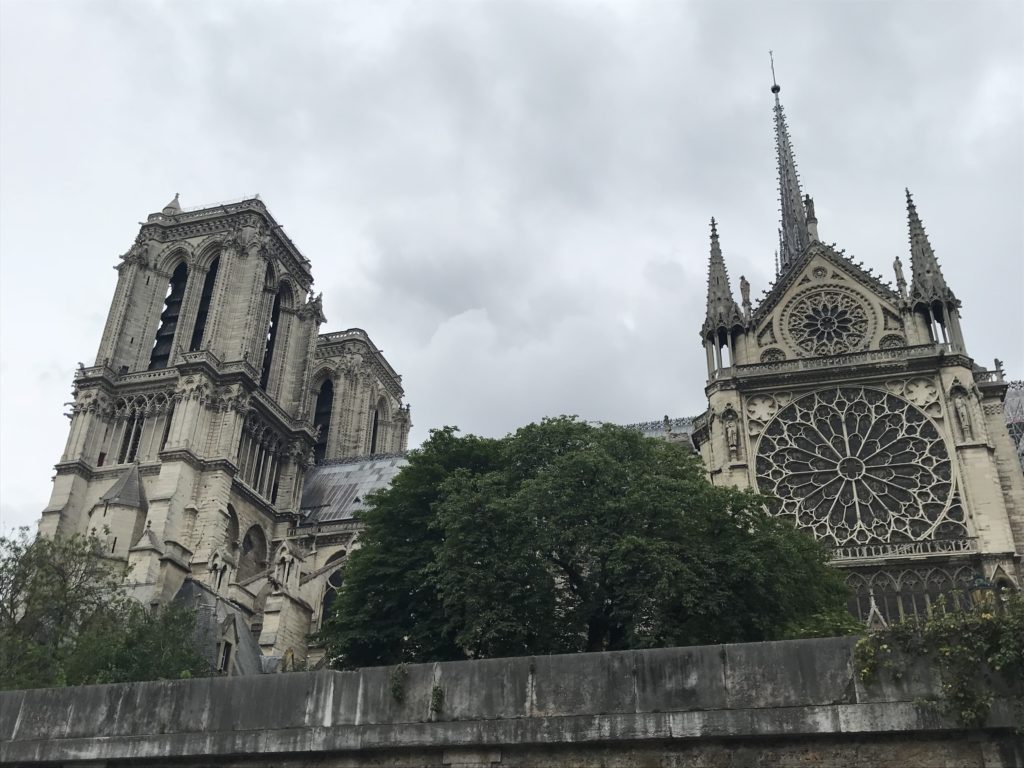 We also saw (purportedly) the smallest house in Paris. 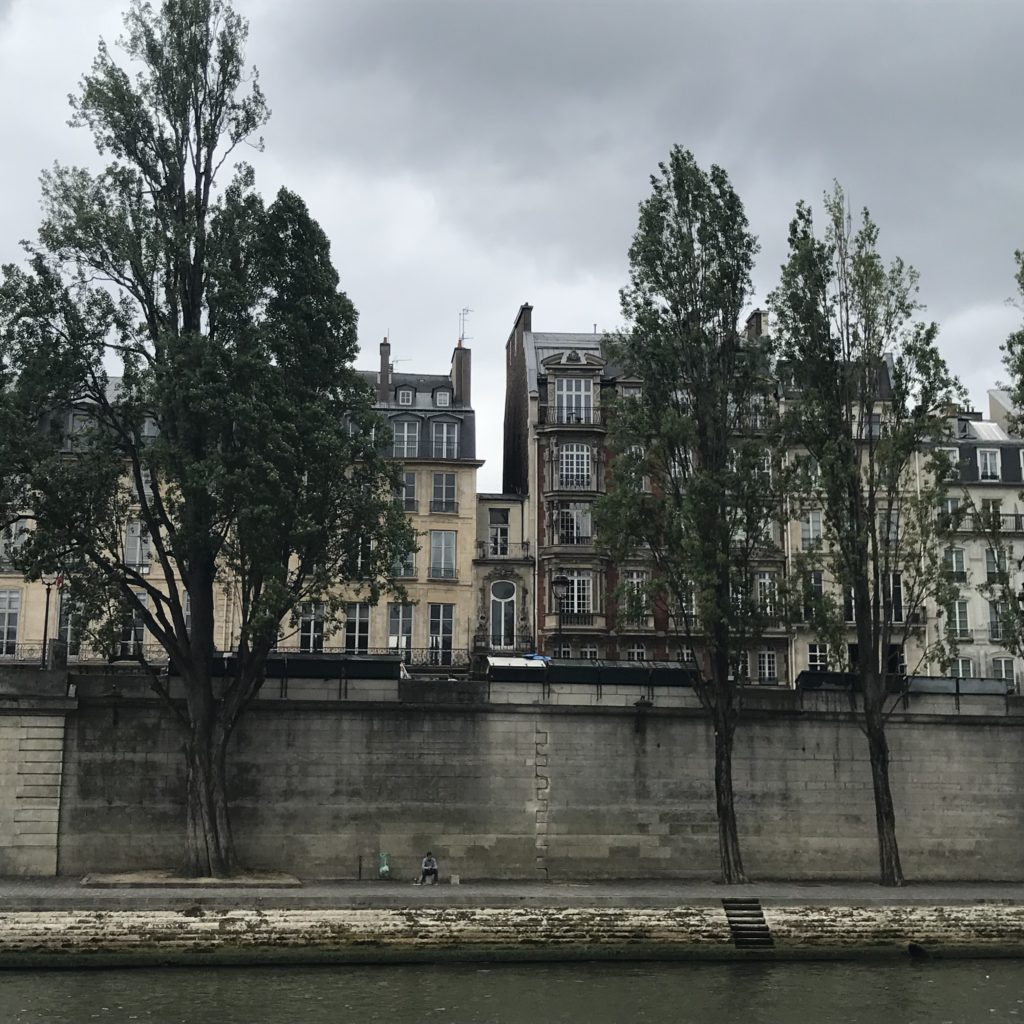 It was a great way to kill and hour and still enjoy the city. I’d highly recommended adding a Seine cruise as part of your Paris itinerary.

A much needed rest

Even after sitting for an hour, the kids were still tired. Three days of walking and sightseeing was a lot for both of them. It was mid-afternoon, and I still wanted to take them to Champ de Mars that evening to see the Eiffel Tower again and basically saw our goodbyes to Paris.

The best course of action was to regroup at the hotel for a while. The kids spent some time watching cartoons while I closed my eyes and tried not to drift off to sleep. Which was hard. I don’t like taking down time and would rather stay out until I’m completely done for the day. But with the kids, I needed to break it up.

But we had to get moving soon before I just decided to stay put. Dinner. We needed dinner.

We headed out after maybe an hour at the Crowne Plaza Paris Republique, and grabbed some more bread, cheese and lunchmeat at a local store. Dinner was on the cheap yet again. However, we splurged afterwards, buying eclairs at one of the top-rated bakeries in the city. It was the most utterly delectable cream-filled pastry I’d eaten in my entire life. 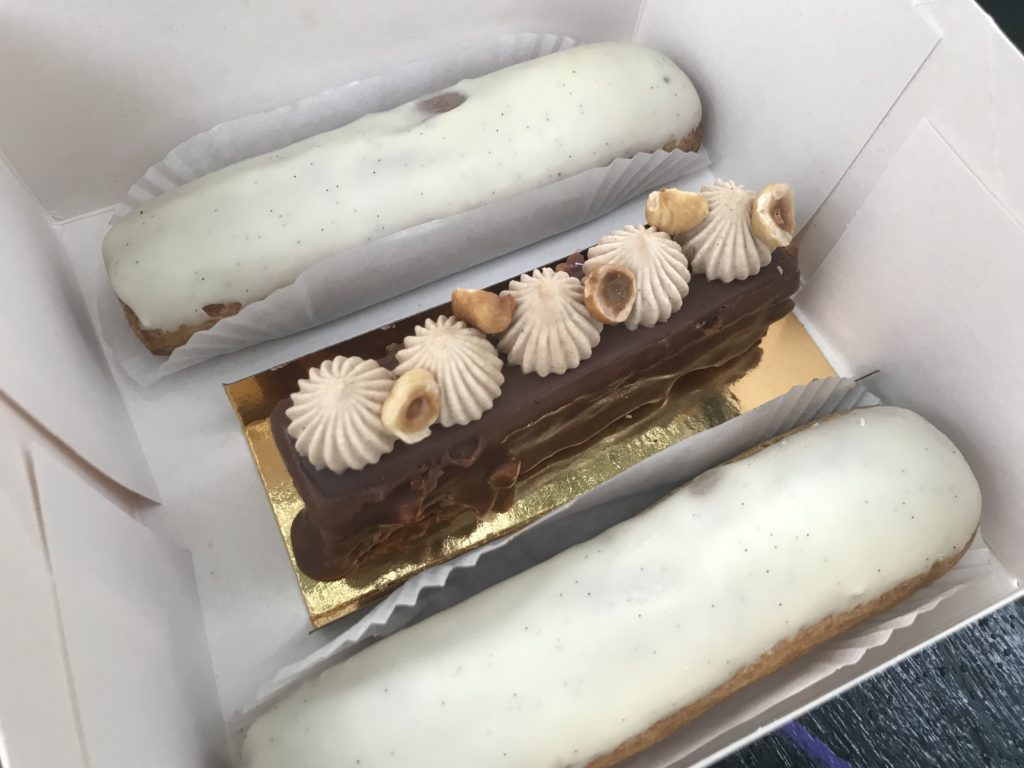 On our way to the Champ de Mars, I became concerned that we might get rained out. The weather didn’t look promising. Sure enough, as we exited the train station, a light rain was falling. Plenty of other people had umbrellas. We weren’t so prepared. Even living in Humboldt, I cannot remember the last time I used an umbrella out and about.

We decided to just make a go of it. Looking at the clouds, I didn’t expect the rain to get worse, and it certainly wasn’t cold. We would be fine. This turned out to be the right call, as the rain let up within 15 minutes.

We walked along the Champ de Mars, bidding the icon of Paris adieu. Just had to get the perfect photo of these two in front of it. We strolled along slowly, me taking it all in. The kids brought up the fact that I’d made them walk up hundreds of stairs to the top. I have no regrets of my decision. 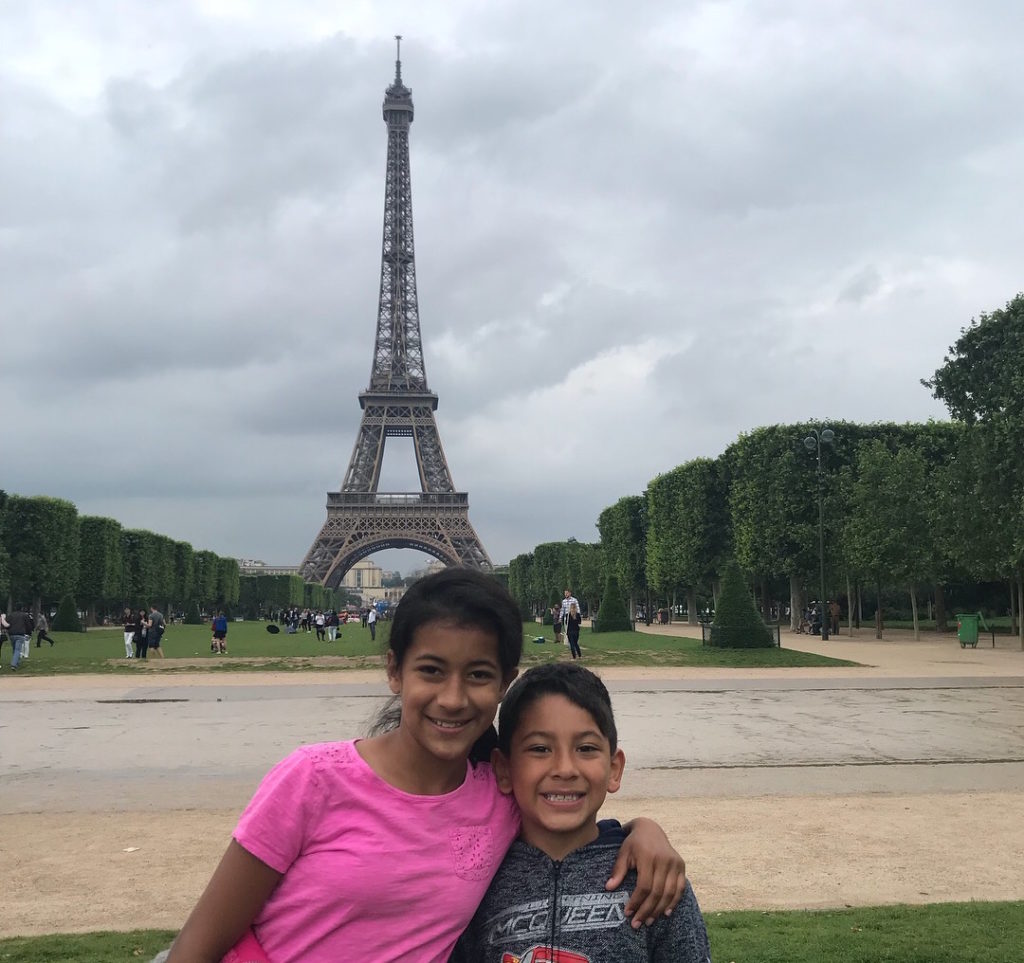 On the other side of the tower we encountered “the bubble man”. He was in the business of providing enjoyment to at least a dozen kids at a time for a small sum from their parents’ pocket (voluntary, of course). The kids enjoyed jumping and chasing the bubbles immensely. The Eiffel Tower made for the perfect backdrop. 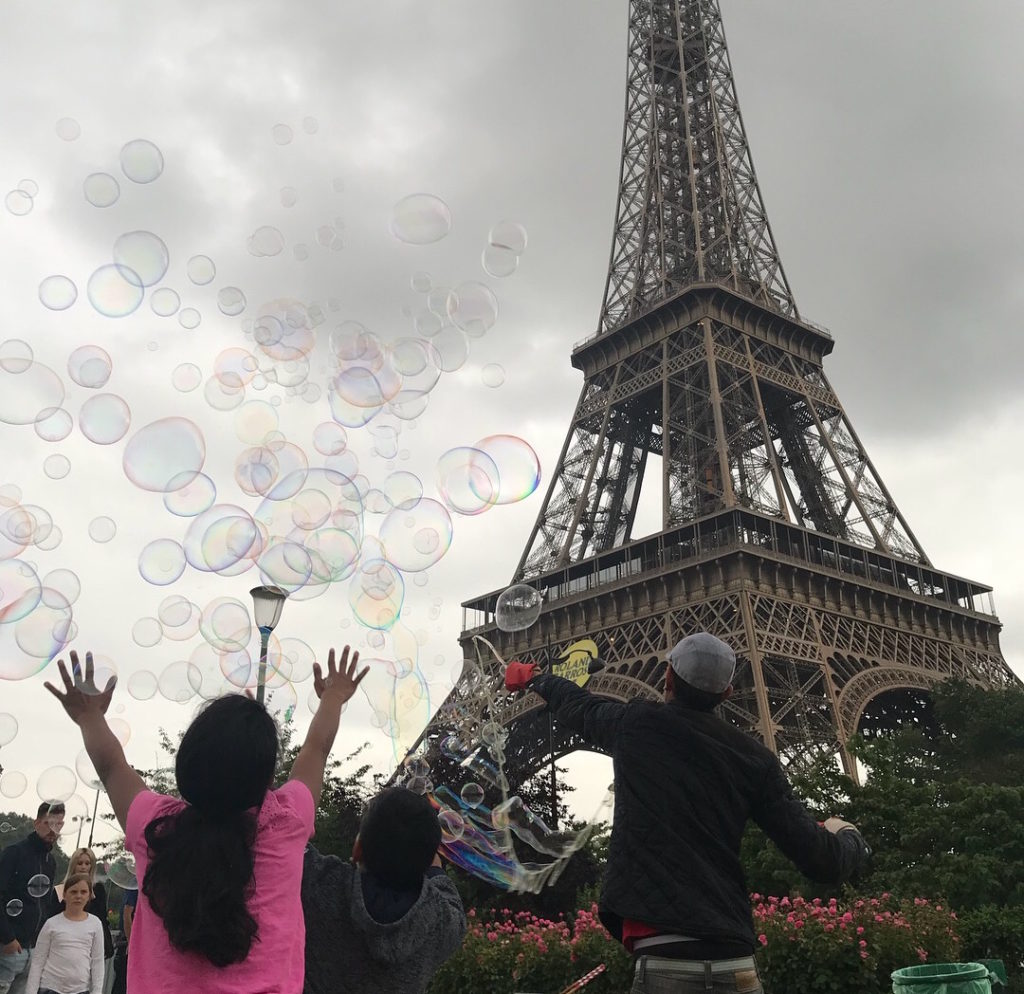 After that we crossed the Seine toward Trocadero once more. This time we weren’t in a hurry, having already accomplished the mission of the evening. The kids asked to ride the carousel, and I figured this was the last chance we’d have. Of course this one picked a plane instead of a horse. 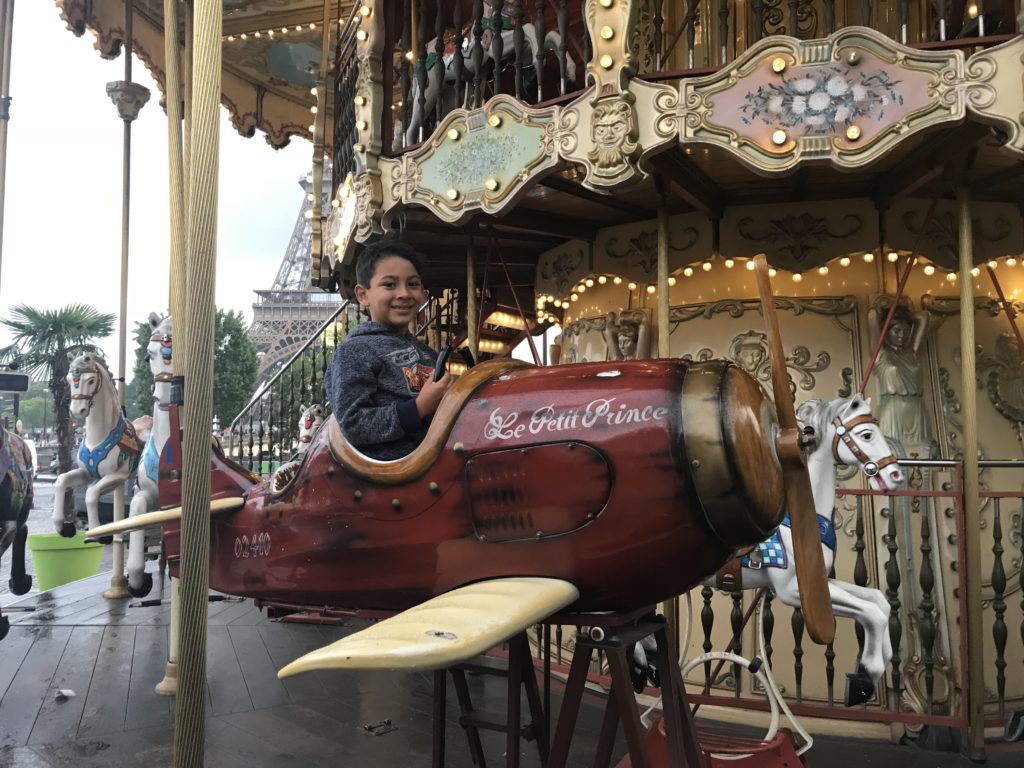 From there we wandered over to a small park maybe 100 yards from the Trocadero fountains. To my surprise, there were a couple families with kids. Young kids. I’m always taken aback by how late Europeans are out each evening. It was definitely late for us. The kids should have already been in bed. But here we were, enjoying the park, as the hour hand crept past 9 o’clock.

We finally got back to the hotel around 10:00, and quickly to bed. We said goodbye to Paris the following day, which was bittersweet. A final visit to Luxembourg Gardens was all we were able to fit in. We’d had a ton of fun. But the adventure would continue in Luxembourg!