Hawaii tops the list of vacation destinations for many people. It is an idyllic, tropical paradise that doesn’t require breaking out a passport. While a trip to the Aloha State may seem expensive, it really doesn’t have to be, especially if you have knowledge of the best miles to Hawaii in your travel hacker toolkit.

There are several great ways to hack travel to Hawaii. Whether you’re simply shooting for an economy round-trip from the west coast, or have your sights set on premium seats out of New York, there are options. Let’s take a look at the best miles to Hawaii.

Best miles to Hawaii from the West Coast

This is a phenomenal deal, considering other major carriers will nail you for up to 22,500 miles each way for the same flights. Here is a map of all the routes you can fly for 12,500 Avios: 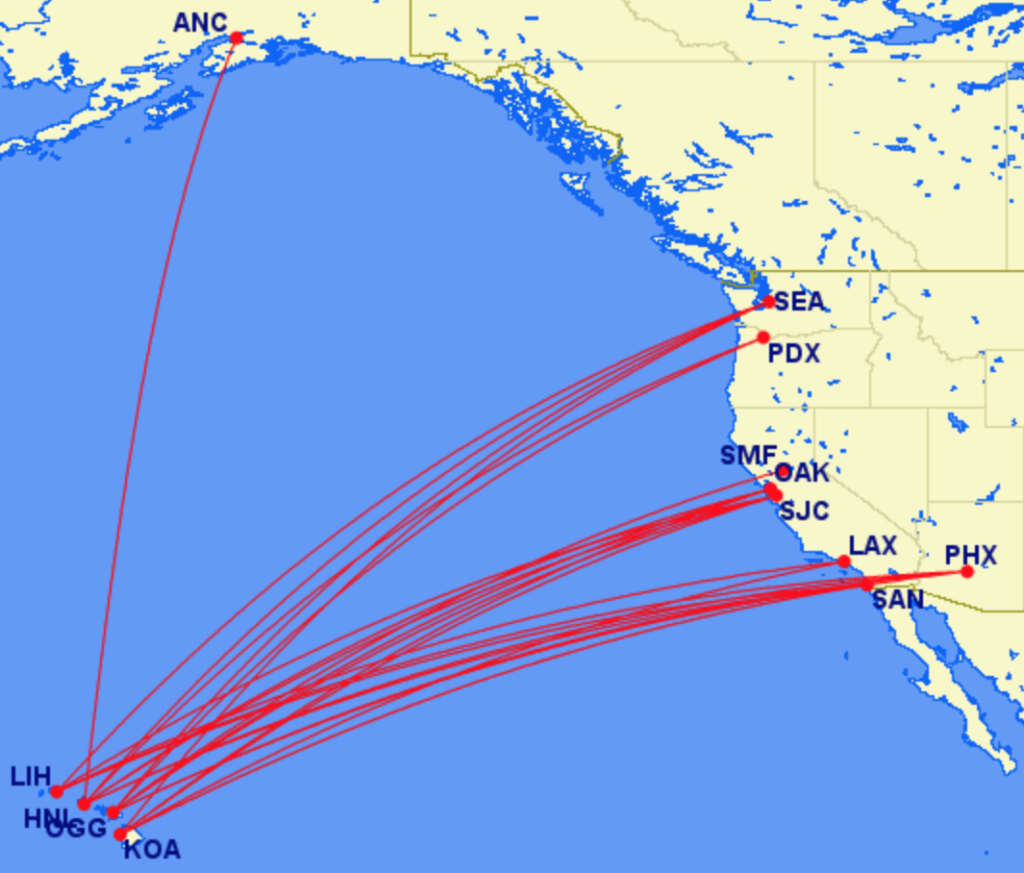 TONS of options for your Avios!

Alaska operates a great number of Hawaii flights, and their award space is typically decent. But don’t expect to score several seats during Spring Break, however.

You can quickly accrue a ton of Avios. British Airways’ loyalty program is a partner of all the major transferable currencies: Chase Ultimate Rewards, American Express Membership Rewards, Citi ThankYou, and Starwood Preferred Guest. Transfer bonuses often come around a couple times per year as well, where you’ll get better than a 1:1 ratio.

To find award space to Hawaii on American or Alaska, search either aa.com or alaskaair.com. You’re looking for the lowest level saver space. You can also search ba.com for American Airlines flights, but it is a bit more painful. I’d check using another engine first, and then move to ba.com.

You should be able to book American Airlines flights with Avios online. To book Alaska flights using Avios, you always have to call (be prepared to wait forever). These flights don’t show up in the British Airways award search engine.

Another great feature of using Avios to book tickets is that they are easily cancelable. This means that if you find award space, just book and figure things out later. You’ll only lose the taxes and fees if you have to cancel, and for flights within the United States, this is only $5.60.

Best miles to Hawaii in economy

If you’re not based on the west coast, you may be wondering what your options are. Fortunately, you have a couple good ones. The best is arguably Korean Airlines SkyPass miles. This carrier’s award chart uniquely places Hawaii in the same zone as the rest of North America. Round-trip flights cost a reasonable 25,000 miles.

Since Korean is a SkyTeam member, you’ll need to find award space on Delta. This can be difficult to do, however, as Delta has killed their award chart. Here is an ad-hoc one put together by one of my favorite bloggers. 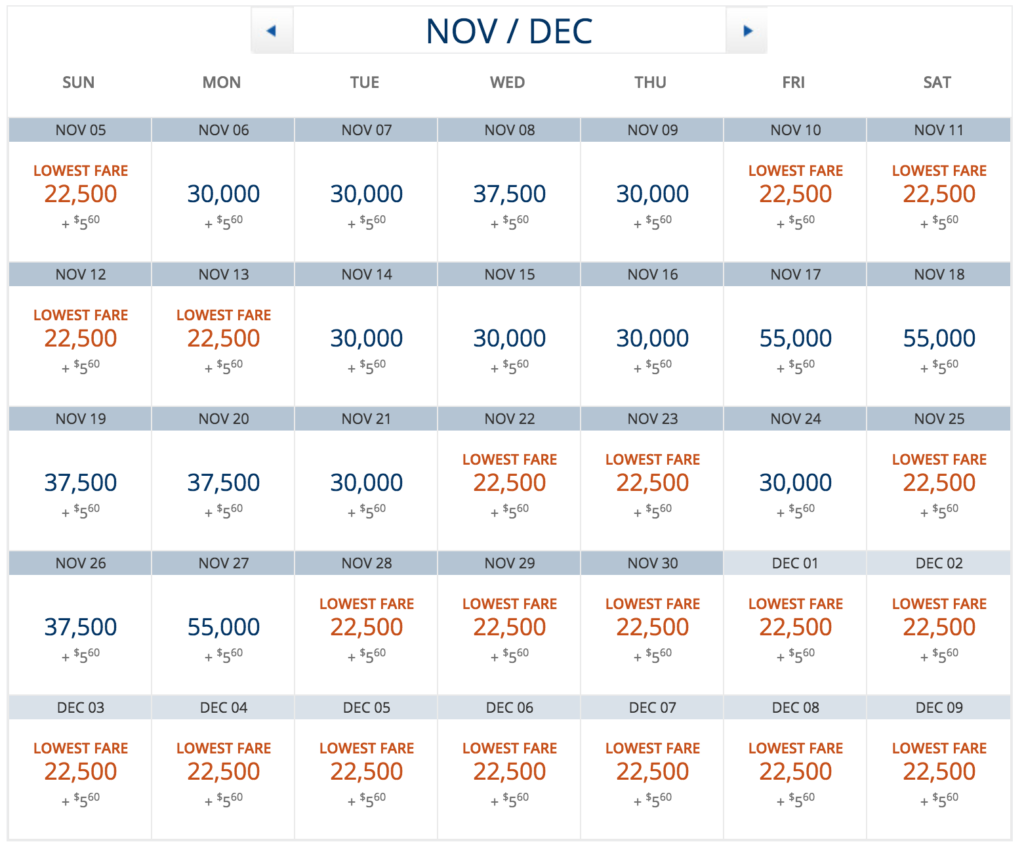 The 22.5k options *should* be Delta’s saver space available to partners.

If you’re short on UR to transfer to SkyPass, consider FlyingBlue instead. You’ll still need to find Delta saver space, as they are another SkyTeam partner. Flights cost 15,000 FlyingBlue miles each way, which is more than with Korean, but FlyingBlue is a transfer partner of all the major transferable currencies. Rather than needing to collect primarily Ultimate Rewards for Korean, you can transfer your American Express Membership Rewards and Citi ThankYou points to quickly accrue a ton of FlyingBlue miles.

How about StarAlliance options?

If you’re looking to fly United, there are a couple options here as well, although they are not as good as the previous deals. United operates a good number of routes to Hawaii, and the best way to book these are using either Singapore KrisFlyer or Asiana Club for 17,500 miles each way.

KrisFlyer miles are fairly easy to obtain, as Singapore is a transfer partner of all three major transferable bank points currencies, as well as a 1:1 transfer partner of SPG. Asiana is a bit tougher, as you can only obtain their miles through either a Starpoints transfer or by spending on the Bank of America Asiana Visa card.

An potential oddball is the Turkish Airlines Miles & Smiles program. Supposedly, their “Limited Capacity” awards are only 10,000 miles each way within the U.S. What isn’t clear is their award region definitions. But…if the North America region includes Hawaii, these awards should (in theory) only cost 10,000 Miles & Smiles each way?

Could it be true?

I tried to check this price with the Turkish call center a month ago, but I couldn’t understand the agent’s response when I asked about this route. Since this could be such a phenomenal deal, I’m not planning to give up until I get a more definitive answer.

Finding award seats in a premium cabin to Hawaii can be a bit tougher than the economy options. However, considering that Newark to Honolulu is an 11-hour flight(!), I can completely understand why some would rather not make that journey in coach.

The best miles to Hawaii in a premium cabin are hands-down Korean Air SkyPass. Like I mentioned previously, Korean defines all of the U.S. as one region, so flights to Hawaii cost you the same as anywhere in the U.S. This prices first-class round-trips at a lovely 45,000 miles. Again, you’ll be flying Delta metal.

Finding this award space, however, can be a chore. Definitely consider traveling off-season, and check often until space opens up. I *think* the lowest level Delta availability is 40,000 miles one-way currently, so you need to look for routes that cost this much if you search delta.com for space. You can try via the FlyingBlue search on either airfrance.com or klm.com, but I’ve found these to be glitchy for Delta flights.

Other options for first class flights to Hawaii include Asiana, which charges 75,000 miles round-trip or 37,500 miles one way. Not exactly a deal, but it’s better than the competition. You could also consider Singapore or Alaska miles for 40,000 miles each way on first. This is just painful given the stellar deal Korean miles offer.

I’m also not sure on the fare coding for Air Canada. If it’s considered business class instead of first, you should actually only have to pay 27,500/30,000 miles each way with Asiana Club/Singapore KrisFlyer, respectively. Flights would be via Vancouver. Definitely something to look into.

Southwest just officially announced that they will be flying to Hawaii. We still have to wait and see what prices will be, but I am sure they will be competitive. Assuming a sale price of ~$500 round-trip, I would assume prices to Hawaii will start at roughly 16,000 RapidRewards points each way. But this is all conjecture at the time of writing.

If you’re interested in the ins-and-outs of Southwest RapidRewards, give this a read.

In a nutshell, the U.S. “Big 3” will hose you when it comes to spending your miles on flights to Hawaii. So avoid them. Use any of these great partner options to book award tickets on U.S. carriers.

I’ll always say that earning miles is half the battle. Or even less than half. Knowing how to stretch your miles is just as important, if not more so. You can literally save tens of thousands of miles on a family trip by knowing which currency to use. Hopefully you can put these tips to good use and enjoy some time in the Aloha State soon!

Should you purchase roadside assistance protection when renting a car?