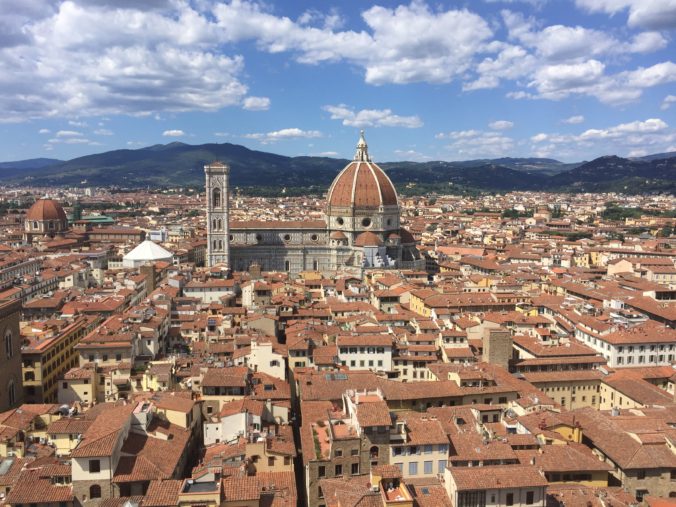 I had some reservations when booking the Hilton Florence Metropole, mainly regarding the location. Unlike the SPG hotel options, the Hilton was a pretty good distance from the city center. I would have much rather booked the Westin Excelsior or St. Regis Florence, but the prices (both in cash and in points) were simply astronomical.

The Hilton Garden Inn was significantly closer, but still not fantastic, and the overall benefits at the Hilton Florence Metropole would be better with the Diamond status I had been matched to for the year. I finally settled on it as our best option, trusting that the views and amenities would make up for the poorer location. Plus, it would be free, except for the annoying city taxes.

We booked five nights to take advantage of the 5th night free benefit offered on Hilton award stays. The total came to 120,000 HHonors points. The same booking would have cost ~$600, so we were getting just 0.5 cents per point. Half a cent is the baseline at which I value a Hilton point, so I was fine with the redemption, but not ecstatic (you can often buy HHonors points for 0.5 cent). 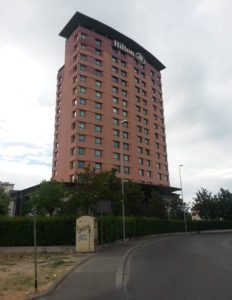 Kels and I arrived in Florence via bus and then train from San Marino. We left beautiful Monte Titano around 10:00 in the morning, and arrived at the Hilton Florence Metropole at about 4:30 in the afternoon. It was a decently long day of traveling, especially considering the two locations are less than 100 miles apart as the crow flies. 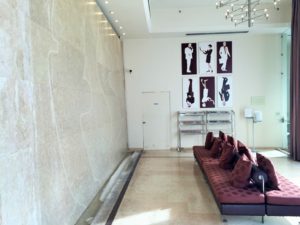 Waterfall (waterwall?) in the lobby

The lobby of the Hilton Florence Metropole is very large and of modern style. There was ample seating past the front desk and an indoor waterfall as you enter. 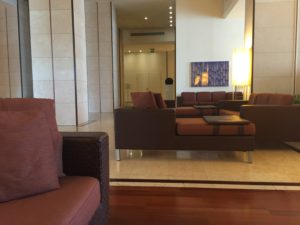 Check in was quick and painless. I had previously confirmed our room via the Hilton app, and no changes were made at check in. By the number (1001), I had suspected that we had been upgraded to a corner room, and this was indeed the case. The Hilton Diamond status match was finally paying off!

My wife and I headed up the elevator to the 10th floor. Luckily, we did not get the slightly awkward chaperone to our room as we had in both Cannes and Milan. 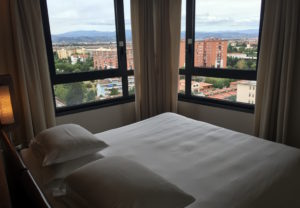 Bed, with a view!

I was in love the instant I opened the door to the room. We were not only upgraded to a corner room, but to one with views of the Duomo and city center in the distance, surrounded by the hills of Tuscany! It was spectacular. 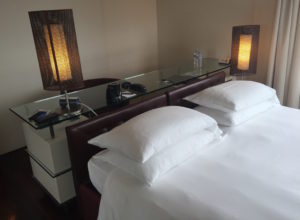 After spending an undue amount of time admiring our view of Florence, I did notice the rest of the room. Everything was very nice, and of very modern style. The desk was glass, and it was uniquely placed directly behind the bed. 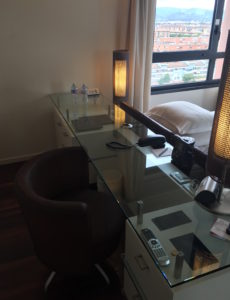 Next to the door was a little nook with the water kettle and glassware. 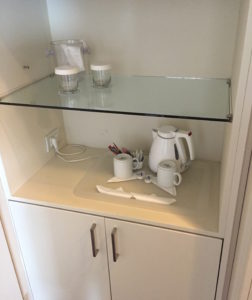 Nook by the door

Like the Hyatt Regency Palais de la Mediterranee, the in room coffee consisted of instant Nescafe. Considering all the good coffee available, the hotels on this trip were failing the in-room coffee thing (except the Park Hyatt Milan). 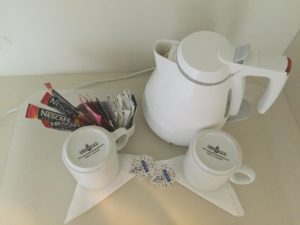 The bathroom was similarly very nice. It had both a shower and tub, and an interesting clear glass sink. 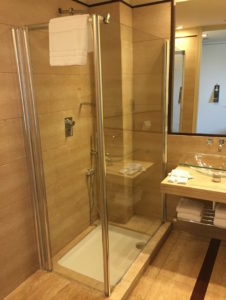 Our only minor complaint was the shower. It was overly narrow. Due to the placement of the handle and shower head, both my wife and I tended to accidentally turn the water either down or off while showering. It wasn’t too much of an issue for us, but I can imagine it would be far more of a hassle for anyone substantially larger.

Overall, we were very pleased with the room. Housekeeping kept it wonderfully clean during our stay, even when we made a mess cooking. 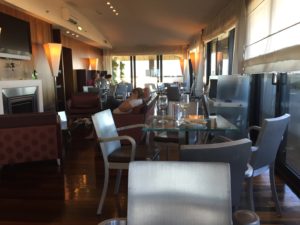 Since both my wife and I had been matched to Hilton Diamond status via a promo at the beginning of 2016, we were granted executive lounge access during our stay, even though we weren’t on any of the 3 executive floors. I had previously been to a couple airport lounges, but this was my first time using a hotel lounge. 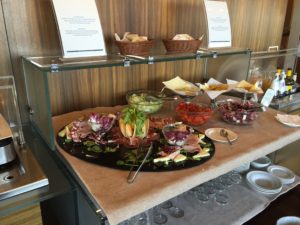 Snacks and light dinner options in the lounge

The lounge at the Hilton Florence Metropole is on the top (15th) floor. It offers complimentary drinks, light bites at night, and a light breakfast in the morning. We ended up eating in the restaurant every morning, so I never actually saw what breakfast was like. 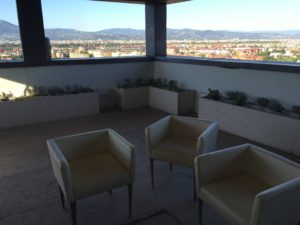 There were two outdoor seating areas, as well as the indoor tables and couches. The views from the 15th floor were spectacular; you had access to at least 270 degrees around the building. My favorite view was toward the Florence city center, the same direction that we had from our room.

Panorama of Florence, city center in the distance at center left

I worked from the lounge most of the evenings we were in Florence. It was a quiet space, there were ample power outlets, and I could snack as I wanted. Although many guests came and went, the lounge never really filled up any of the nights we were there. 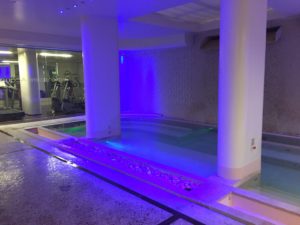 On one of the evenings, my wife and I had a chance to enjoy the pool. It is quite small, but it had a very cool waterfall! And we had it to ourselves the entire time we were swimming. 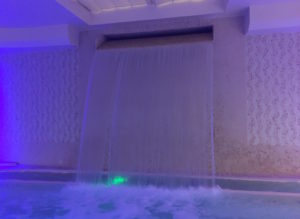 Strangely, there were a few sunbeds. The pool is below ground level and there are no windows, so I wondered why anyone would want to come lay here for a while. Maybe you can tan from indigo mood lighting? 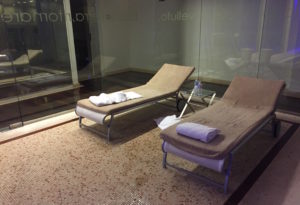 Lounge chairs near the pool

The towels laid out and free bottled water were a plus, though.

Adjacent to the pool was the fitness center, which….I never used (vacation is about eating and seeing the sights, okay). 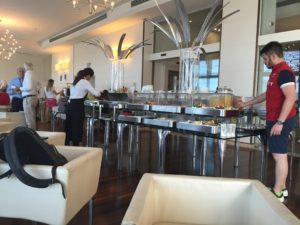 Buffet breakfast in the hotel restaurant

Speaking of eating, we enjoyed breakfast in the restaurant each morning, complimentary of course as another Diamond perk. The spread included a wide variety of both European and more American breakfast choices. It was honestly the best hotel breakfast I have had. 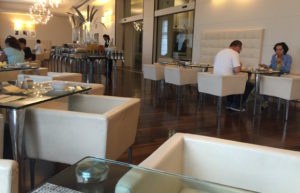 As I mentioned at the start, the Hilton Florence Metropole is a pretty good distance from the center of Florence. The hotel does run a complimentary shuttle, but the schedule isn’t ideal. The pickup times are 60-90 minutes apart at either end, so you really have to settle on a plan ahead of time. Space is also issued on a first-come, first-serve basis. The morning runs into Florence were usually full. If the shuttle runs out of space, you are out of luck. Fortunately, we always managed to find a seat.

The shuttle drops you about a 5 minute walk from the Santa Maria Novella train station, at the Piazzale Montelungo. The Mercato Centrale is an 8-10 minute walk, the Duomo about 10-12, and the Palazzo Vecchio roughly 20. We did a ridiculous amount of walking over our three days seeing the city and every night returned to the hotel exhausted. 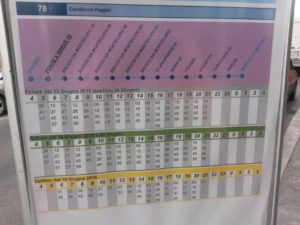 The public bus stop just down the street from the Hilton. Route 78 goes to the tram.

If the shuttle isn’t cutting it, you can navigate the public transit system. I honestly preferred this option, and we took it more than half the time. The schedule is more regular, and there is a bus stop a few hundred feet from the hotel. You have to make one transfer between the #78 bus and the T1 tram, but it is fairly straightforward. You can tell which stop it is since the bus basically empties out. 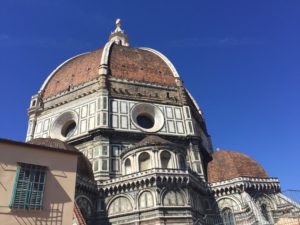 Florence has so much to see and do. We spent three long days seeing the art, the architecture, and enjoying the beauty of this Renaissance city. 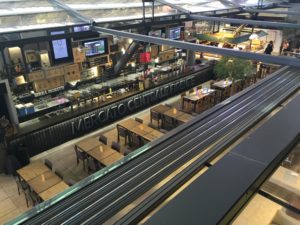 The upper floor of the Mercato Centrale Firenze

Our highlights were the Duomo, the Galileo Muesum, the Mercato Centrale (wife’s absolute favorite!), and enjoying lunch in some of the small cafes. The Mercato Centrale consisted of a covered market on the bottom story, open most days during the moring, and then an upper, enclosed floor that had food vendors, a bar, and other specialty shops. 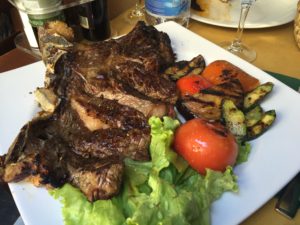 The “steak for two” special. We did eat it all.

The most memorable was our Florentine “steak for two” at a cafe near the Duomo. The special on the sign said 1 kg, but I didn’t realize it would be a single giant steak! 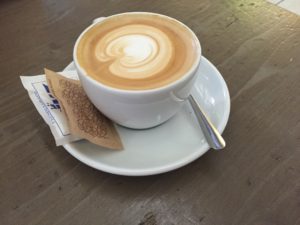 I also probably had like 17 cappuccinos over the course of a few days. I went from having never ordered one in my life to being completely addicted. 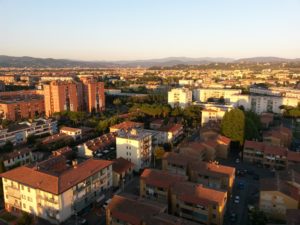 Florence city center at sunset, viewed from the lounge terrace

Our entire stay in Florence was incredibly memorable. The city is full of art, history, and culture. Even after three days of museums, churches, and other sights (using our Firenze Cards), Kels and I both felt like we had barely scratched the surface of what the city had to offer.

If you ever have the wonderful opportunity to visit the birthplace of the Renaissance, I would highly recommend both the Hilton Florence Metropole, and a stay of at least 5 nights, if not a week.

Norwegian Given Approval For Ireland-U.S. Service