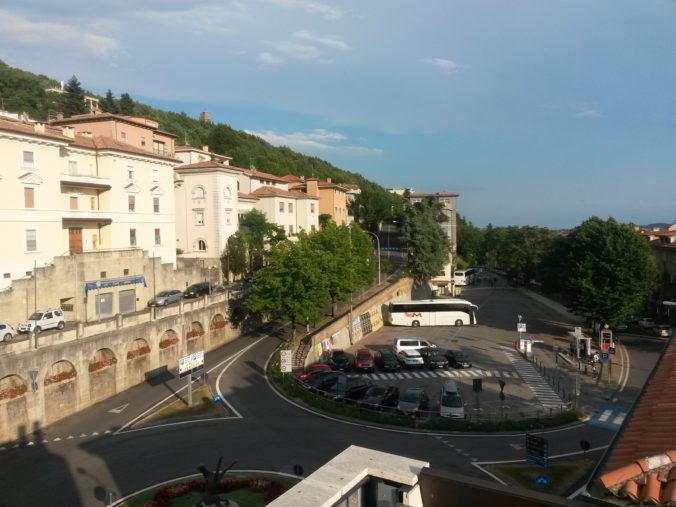 My wife and I spent three nights in the tiny country of San Marino during our European adventure this past summer. There were no chain hotel options, and we were out of points on our Arrival cards, so it was one of the few places that we had to pay cash. After reviewing a few options, I booked a deluxe room at the Hotel Joli through Expedia for $299, including taxes. 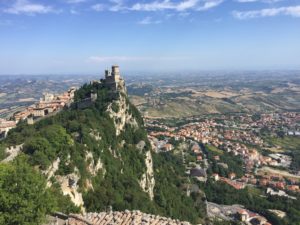 As an aside, San Marino is a gem of a county. Now I want to go back and look through my photos. Our time there was perfect. Three nights and two full days are enough to see pretty much everything.

My wife and I arrived in San Marino by bus from Rimini, Italy. The bus runs roughly every 90 minutes from the train station and the ride is about an hour. You can get tickets at the information building, but not the kiosk that says ‘Bus Tickets’. The actual stop is down the street past Burger King.

The bus driver directed us up the street to the Hotel Joli. And by ‘up the street’, I don’t mean up the block. I mean ‘head in the steeply uphill direction’.  The Città di San Marino is build on Monte Titano, and the streets are often steep and have hairpin switchbacks.

Before we started the climb, however, another passenger alerted us to an elevator. With all our luggage, this sounded like a much better option. We met two other travelers from Argentina (I thought we were far from home!) who were also headed to the same hotel. 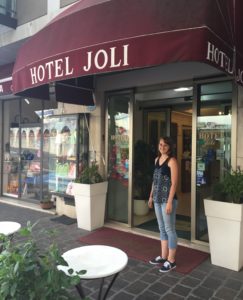 The Hotel Joli ended up being an 8 minute walk from the bus stop, even with the elevator ride. It is outside the old city wall, but very close to the oldest part of San Marino. 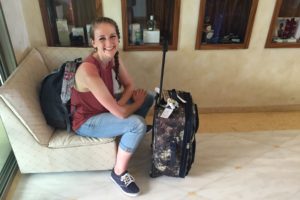 We arrived! Sitting in the lobby waiting for our turn to check in

The lobby is small. There were two receptionists present when we arrived, but only one was really helping people. Because the two ladies checked in before us, I realized that she was fluent in Spanish, not to mention English, Italian, and French, as I would later find out. Europeans put us Americans to shame when it comes to languages.

Check in took a little while, but we didn’t mind. We had given ourselves all day to get to San Marino, and our schedule was relaxed. We were given the key to our room (a physical key) attached to a key card that would allow the lights and air conditioning to function.

The room was on the third (top) floor, and the elevator was being worked on when we arrived, so we had to take the stairs. It was a climb, but not unmanageable. 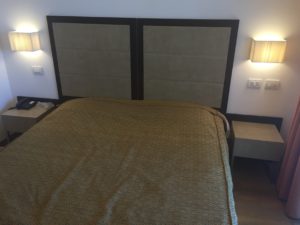 How flat are the pillows?

The room itself was small. I had expected something a bit bigger, considering it was billed as a deluxe room. The bed was spartan, with flat pillows. The mattress was extra firm, and we didn’t sleep especially well. 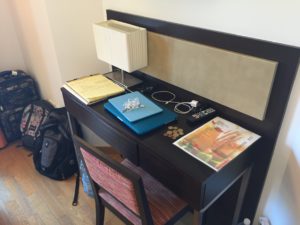 At least it had a desk, and the other usuals, but there wasn’t really anything special about the room. Housekeeping kept it nicely clean, though, and stocked. 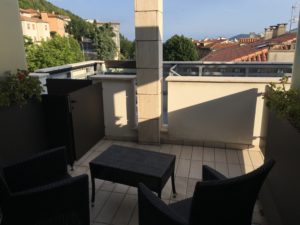 The deluxe parts really just turned out to be the private outdoor area and the updated (but small) bathroom. 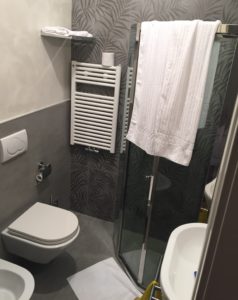 I was very happy that the room had a shower rather than a tub. 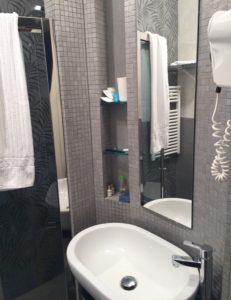 Overall, it was simply satisfactory. Nothing impressed. 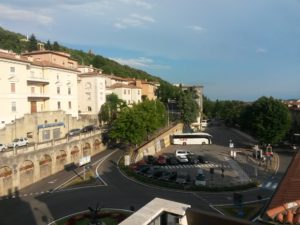 Main view from our terrace

The only real disappointment was the view. I had expected the room to face away from the hillside. You could look out over Tuscany if you went to the edge of the outdoor area and looked to the right, but it kinda invaded on the privacy of the people in the next room. 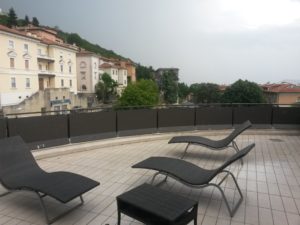 Terrace open to all guests

There was also an outdoor terrace on our floor for all guests to use.

Breakfast was included, and it also wasn’t anything special. There were some croissants, tarts, rolls, yogurt, and a few other options. I usually feel awkward taking food pictures with people around, so you don’t get any. Sorry. Maybe I’ll get over that someday.

Overall, breakfast was more European than American, and that was entirely expected. The only complaint was the coffee. It was from an automatic machine and downright awful. 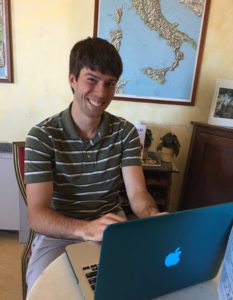 Messaging family from the lobby

The wifi had some intermittent issues during our stay. The signal wasn’t especially good in our room. My laptop managed it fine, but it was still slow. Our phones struggled. A few times it cut out completely.

But we had come to enjoy San Marino, and this wasn’t one of the places I had planned to work. So we were fine. We headed down to the lobby when we really needed to send some messages or surf the internet for a while (pictured).

The location was good. The San Francesco gate was less than a 5 minute walk, and everything in old San Marino is walkable. You really couldn’t beat the location, except for a couple hotels located within the old city itself.

Overall, I wasn’t impressed with the Hotel Joli. It was a deal at less than $100 per night after taxes, but I would have happily paid more for a bit nicer room. If we returned, I would look at the Hotel Cesare or Hotel Titano, both of which are within the old city.

WOW $99 California To Iceland Fares: What This Means