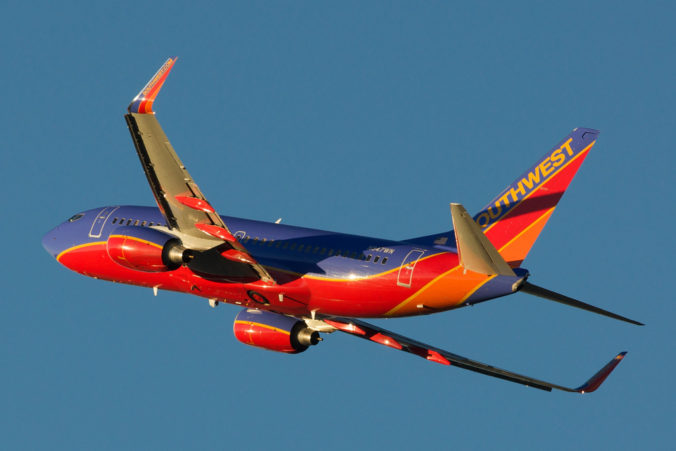 A Beginner’s Rundown On Southwest RapidRewards

Southwest Airlines is one of my favorite airlines. Actually, I previously wrote about how they are my favorite airline, but I may need to qualify that now. They are my favorite domestic airline. Alaska is also giving them a run for their money. But Southwest sill reigns supreme due to their fantastic checked luggage allowance, great service, cheerful personnel, and tendency to arrive at destinations ahead of schedule. Honestly, I cannot remember the last time a was on a delayed Southwest flight.

While I could continue my unabashed monologue on the merits of Southwest, I want to instead focus on solely their loyalty program: RapidRewards.

Unlike the majority of airline loyalty programs, RapidRewards neither uses a currency of “miles” nor prices awards based on zone or distance. Instead, you earn RapidRewards points, and award prices are revenue-based (i.e. correlated with the price of cash fares). Zones don’t exist. If a cash fare is cheap, the price in points will be cheap. For example, a one-way flight from Oakland, California to San Diego, California costs either $69 or only 3,676 points.

Flights next month from OAK-SAN start at $69.

This award price is incredible. Other domestic carriers generally charge 7,500 to 12,500 miles for the same one-way ticket. This is because all are priced by zone and/or distance, and since the entire United States is one zone, it doesn’t matter if you are flying OAK-SAN or OAK-MIA. Same price. Some other carriers offer “short hop” prices for routes like OAK-SAN, but you should still expect to pay at least twice the points that Southwest requires for the Oakland-San Diego ticket. Nothing beats this value.

Revenue-based award pricing may seem like a boon, but it is a double-edged sword. During peak travel times, the price of paid fares usually goes through the roof, and so do award flight prices. This example of an Oakland-Baltimore flight the Sunday of Thanksgiving weekend is a perfect illustration. The cash fare is $405 one-way! Or you could instead pay 29,089 RapidRewards points. Any other carrier would charge you 12,500 miles if they had saver award space. But good luck finding availability!

If you are dead set on a Thanksgiving visit with family, Southwest could still be your go-to in a pinch. As long as a seat is available, you can purchase it with points rather than cash. Even if the price is astronomical.

What Are Points Worth?

Which brings us to an important question: how much is a RapidRewards point worth? Well…it depends. Southwest’s award ticket prices are correlated to cash fares, but there isn’t a fixed value per point. You should expect to get about 1.5 cents per RapidRewards point, but it varies. Price, demand, route, and potentially other factors come into play. At least that is my deduction. The actual award pricing algorithm is a black box.

So we just have to roll with it. As I mentioned before, 1.5 cents per point is a decent baseline. In the OAK-SAN example above, the exact cash fare was $68.98. Subtracting the security fees and dividing by the award price of 3,676 points, we are left with a value of 1.72 cents per RapidRewards point. Not bad. This is on the high end. Conversely, the OAK-BWI Thanksgiving example is only a return of 1.37 cents per point.

From this we can surmise that high price and/or demand results in a worse return for your points. I have read complaints about Southwest not being forthright about their award pricing structure, or that the “black box” system allows them to change it incrementally without people noticing, but I don’t really buy this argument. Southwest is known for their great customer service, and a subtle devaluation would go completely against the grain of their organization. So it really doesn’t bug me that awards cost more during peak periods. I just accept it.

So now we know how awards are priced. But how do we earn RapidRewards points?

Well, there is the obvious: by flying Southwest. Depending on the fare class, you earn either 6x, 10x, or 12x the base fare. Business select fares earn the most while the “Wanna Get Away” fares earn the least. 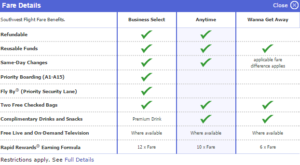 You may think that this means I would earn 414 points for the $69 OAK-SAN “Wanna Get Away” fare in the first example. In reality, I would only 306 points. This is because “base fare” is the price of the fare without any taxes or fees. It turns out that the base fare for that flight is only $51.05, so that’s where the total of 306 (51 x 6) RapidRewards points comes from. You can see the fare breakdown once you have selected a flight on southwest.com and moved to the Price/Summary page.

The “Wanna Get Away” fares are nearly always significantly cheaper than either the Business Select or Anytime fares, so there is no reason to pick the more expensive ones just for the points multiplier. 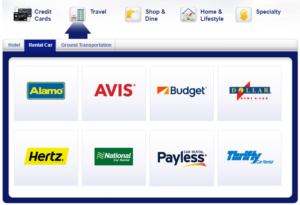 Car rental is another option. I only collect rental points with two providers (Hertz and Enterprise), so earning RapidRewards points for rentals with other companies can be a great deal. There is a “Frequent Flyer Surcharge” on most car rentals when you earn points, but it is on the order of $1 per day. Generally, it’s totally worth it.

Other means of accruing points include the RapidRewards shopping portal, the dining program, and various opinion and survey panels. I often use the dining program when I am traveling for work. It is a nice extra bonus. Figure out what works for you. The surveys can easily require more time than they are worth.

Finally, there are the co-branded Southwest Visa cards issued by Chase. They offer okay value. Try to apply when they are offering a sign-up bonus of 50,000 points. The cards both earn 2 points per dollar on Southwest flights and purchases made with Southwest’s hotel and rental car partners. For all other purchases you earn 1 point per dollar.

On the surface this seems like a pretty good deal. However, Southwest is a 1:1 transfer partner of Chase Ultimate Rewards, so the Chase Sapphire Preferred card offers the same (or better) earning potential, with added benefits like better purchase protection and trip insurance. Plus, your points aren’t locked into Southwest.

The disadvantage is that earning Chase points and transferring them to Southwest doesn’t help you earn the Companion Pass (more on this some other time). This is the primary advantage of the co-branded credit cards. Any points earned via credit card spending do count toward Companion Pass qualification. You can also earn Tier Qualifying Points (TQPs) with a large amount of spending (1,500 TQPs per $10,000 in spending, up to a total of $100,000) which helps toward A-List qualification. The credit cards also offer anniversary points that help offset the annual fee.

This is the easy (and fun) part. Booking flights using RapidRewards points at southwest.com is really straightforward. When you search for flights, you can toggle between dollars and points. Simply choose the price(s) in points, and click continue. You’ll then see the total points required and the fees you’ll still have to pay. When you complete checkout, the points will be immediately deducted from your total balance.

Total cost in cash and points for the OAK-SAN award fare.

What if you need to change or cancel the award flight you just booked? This is where Southwest really shines. Unlike most carriers that charge ridiculous fees for award ticket changes or cancellations, Southwest allows you to cancel award flights free of charge up until 10 minutes before your flight! The fees will be refunded, and your points will be redeposited. That’s awesome.

You can also use this fantastic cancellation/change policy to save points. Say I booked the OAK-SAN flight for 3,676 points yesterday, but the price dropped to 3,056 points today. Rather than keep the ticket I booked yesterday, I could simply cancel it and re-book the same flight at a lower cost. Voila, I saved 620 points! This “trick” has come in handy on several occasions.

So there you have it. I hope you have enjoyed this rundown on Southwest RapidRewards. It is a fantastic program and offers great value for domestic (and a few international) flights. If you haven’t already, enroll for a free RapidRewards account and start earning points. Consider getting a Chase Sapphire Preferred card to boost your balance. Above all, LUV Southwest.

RoboLuggage? This Is Straight Out Of Sci Fi!