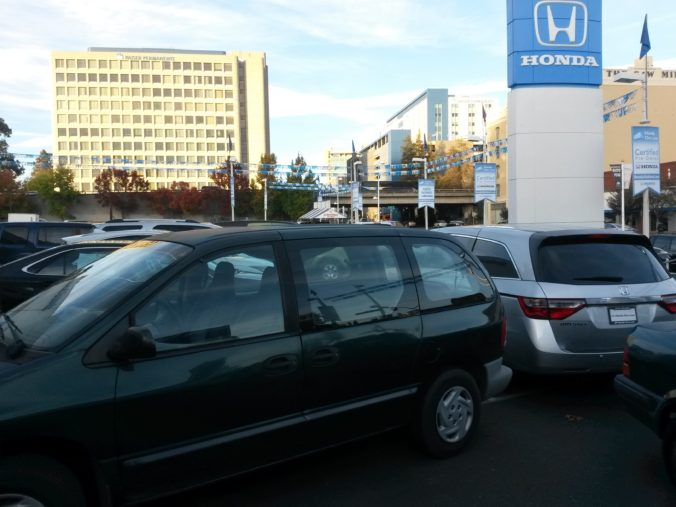 It became evident during the past few days that I intensely dislike car shopping. Salespeople generally put me off already, but it becomes even more nerve-wracking when you are looking at a several thousand dollar used car purchase. So stressful. But the ordeal is over, and we have swapped our old Dodge for a much newer Honda.

For a couple years now, my wife and I have been saving to buy a new vehicle. We inherited a minivan from my wife’s grandpa just before we were married, and it has served us well enough for four years.  A bit cantankerous at times, it had an annoying habit of rebelling each time we wanted to take out of the county. But other than that it generally ran well. 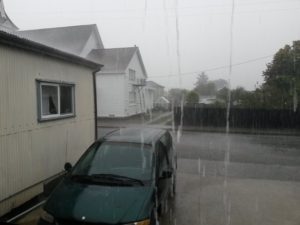 The first real rain came with a fury. And once again revealed a leaking vehicle.

Originally we intended to get a new vehicle next spring, but the first real rain of autumn quickly changed our minds. I had completely forgotten that the back hatch had developed a leak. We didn’t really feel like dealing with the issue for another Humboldt winter, so I started searching in earnest.

We settled on a Honda Odyssey as our desired vehicle. I spent six hours on Sunday looking at craigslist ads and listings at dealerships. As suspected, there weren’t really any options for used Odysseys in the price, mileage, and year ranges we were interested in. I expanded the search to Sacramento, the Bay Area, and as far south and Los Angeles and San Diego. We found a few promising options near the Bay, and I decided to hit the road this week to take a look.

I worked a half day Tuesday and set up two later afternoon appointments to test drive a couple vans in Sonoma and Marin counties. I would then head to East Bay the following morning to take a look at one more that my wife and I really liked. After lunch I grabbed the checkbook, visited the bank, and then hit the road.

As I was backing out of the credit union parking lot, my phone buzzed. Highway 101 was closed due to a truck crash and fuel spill. Of course. This happens every single time. 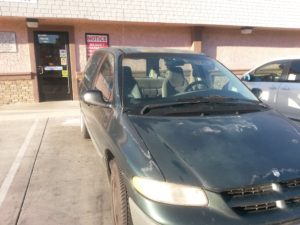 So Highway 36 it was. This was gonna cost a lot of time and make me miss all the appointments I had made. Three winding hours later I was finally in Red Bluff. After gassing up and checking some local listings, I took off toward Chico to look at a 2010 Odyssey. Just before dark I arrived to find that the vehicle had just been sold. Strike one.

Booking a hotel in the North Bay (that helped fulfill my Fall IHG Accelerate promotion), I figured I would show up bright and early in Walnut Creek to make sure the next one didn’t get away from me. Arriving precisely at 9:00 a.m. the next morning, I inquired about the second van, only to find that it had sold the previous evening. Strike two. 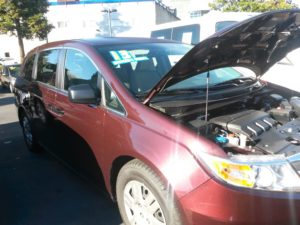 First one I test drove. Had an awful steering wobble.

So it was on to the third dealership, which was luckily also in Walnut Creek. They had a decently priced 2013 Odyssey LX that looked fantastic. The body and interior were in pristine shape, but the test drive went poorly. The steering had a major wobble over 45 mph. I decided to move on.

I examined and drove two more vans in Hayward, and struck out on both of those as well. Neither felt right and both were pricey. Then I zipped across the San Mateo bridge to try and look at another, and finally it was back to Oakland. By this point it was 4:00 p.m. and I was frustrated.

The last van was a lovely, silver 2012 Odyssey LX, and the asking price was on the very low end of the Kelley Blue Book range. After a test drive and examination, I was feeling good about this one. Then the CarFax showed it had been in a minor accident. The salesman and sales manager assured me everything was fine. The front end body work looked very good. I never would have known. But I still had some reservations. 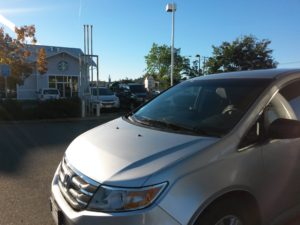 The final pick. So happy I finally found one.

An hour of indecision later, after multiple phone calls and a lot of discussion with family, I finally decided that the price was right and I should pull the trigger. Our old minivan, the champ that had just navigated 36 and nearly 500 miles of California with nary a problem, was put out to pasture for ~$270 trade-in value. It would be headed to the auction. Another hour later I was driving away in the Odyssey. My second night was spent at the Sheraton Petaluma, and I made it home around noon the next day.

It was a trek of two days and two nights, but it was successful. A third-party inspection of the van by a local dealer resulted in nearly a clean slate, and the couple problems uncovered were very minor. We are happy with the purchase. Let’s just hope that the pace of the next road trip is a bit slower and less stressful.

A Beginner’s Rundown On Southwest RapidRewards