Life can surprise you. If I had been told three weeks ago that I would be headed to southern Utah today to perform a field survey, I would have laughed. But that’s exactly what has happened. Our Great Basin regional manager called me out of the blue to ask if I could put together a proposal for a small project that would require my expertise. Because time was an issue, I fast-tracked the effort, and just over a week later I was informed that we won the work. I had my flight booked within minutes. Fast forward several days, and I am typing this in the air somewhere over the Sierra Nevada Mountains on the second leg of my flight from ACV -> LAS. 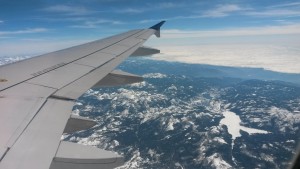 Cruising over the Sierra Nevada. So glad to see some snow!

Last-minute flights out of Arcata-Eureka aren’t cheap (actually, nothing out of there is cheap), and I could just as easily have flown San Francisco to Hong Kong as Arcata-Eureka to Las Vegas for the same price. My economy ticket came to $672. Even though it’s rolled into the project budget, this still disgusts me. United’s prices can truly be robbery. In any case, it is still a better deal than a rental car and 10+ hours of driving. The higher price does earn me more miles, and I can’t complain about that.

The trip is a mere 3 night stay with two long days of work sandwiched in between. Both hiking in Zion and lounging around a pool in Vegas for an afternoon are out of the question. But I don’t mind. It’s a new place, and a welcome adventure. Not to mention it’s my first real field work. Ever. This is what I am most excited about. Travel is just an added bonus.